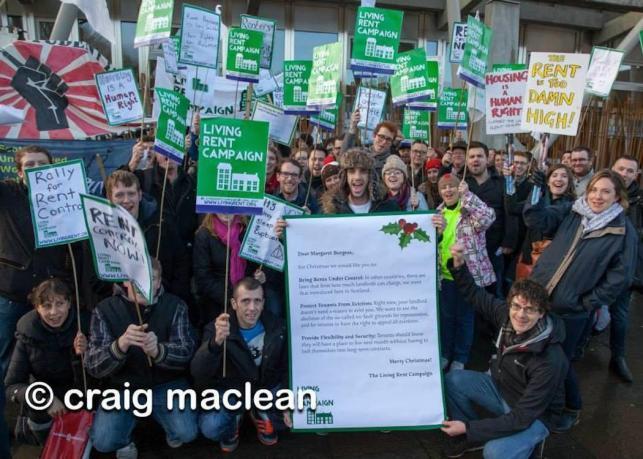 THE MARCH TOWARDS establishing affordable rent-controlled housing across Scotland has taken another giant leap forward after Edinburgh City Council became the first area in the country to take forward new price-control powers.

The Private Housing (Tenancies) Scotland Act 2016 included new, localised rent control powers for the first time in a generation – giving council the opportunity to apply to central government to place a cap on rent increases in ‘pressure zones’.

Edinburgh City Council, now in a SNP-led coalition with the city’s Labour group, has become the first council to approve action on how to implement rent controls. The confirmation, approved on a cross-party basis at a full council meeting at the end of June, is a boost to campaigners who want the powers used locally and then strengthened on a national basis.

Edinburgh has been among the areas hardest hit by rent hikes over the past five years with a total rise of 24.7 per cent across the Lothian region, taken on the average cost of the most common two bedroom properties.

SNP councillor Kate Campbell, commenting on the decision, wrote: “Locally we committed in our manifesto, and it is now included in the coalition agreement with Labour, to building 20,000 [homes] in Edinburgh. This is the only real solution – but it takes time to build that many houses.

“And while those houses are being built the need for them will continue to increase. So we must look at other ways to improve things in the short-term.

The motion, proposed by Scottish Greens councillor Steve Burgess, read: “Council agrees to call for a report on the steps that need to be taken to implement a city-wide Rent Pressure Zone to limit increases in high rents in the private rented sector in the City.”

Susan Rae, Edinburgh Green councillor who led the debate, told CommonSpace: “To be a tenant is to face a huge rise in costs and no rise in quality: to know that the bulk of your income will line a landlord’s pocket leaving you with no hope of saving for that vital deposit; to know that losing your income can mean losing your home; to feel that unless your income is in the higher bracket, such is the barrier to owning or renting your own home, then this city doesn’t want you to make your permanent home in it.

“This is why Edinburgh needs action on private rents.”

Tory councillors attempted to water down the proposal with language considering the “desirability and anticipated impacts” of rent controls – rather than committing to the policy in principle.

Living Rent, forming a National Tenants Union, continues its campaign for quality housing, security of tenure, and fair rents in the growing private rented sector. The organisation was vital in establishing the rent control powers in the 2016 Act.