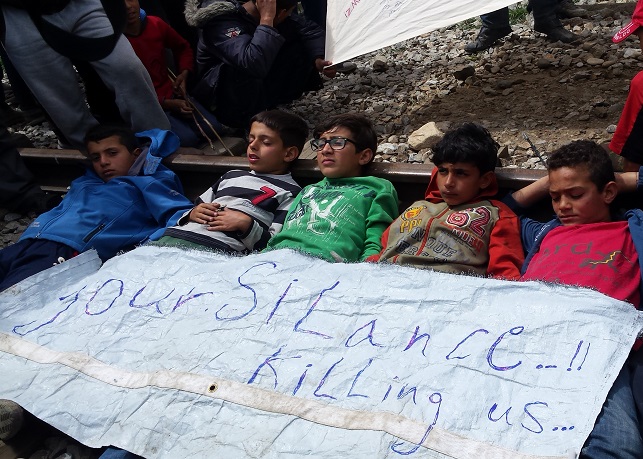 As Greek police move in to disband the makeshift Idomeni camp, journalist Stefan Schmid gives a first-hand account of the brutal choices facing refugees there

FOR almost two years, refugees have travelled through Greece in their thousands, preparing to scale the Balkans in hope of a new life in central Europe. When it was announced that Macedonia would close its borders to all but the selected few, people continued to flock, settling in tents near the border, waiting for their chance to cross.

It was just over 11 weeks ago, on 9 March, that it was decided that the border would be shut completely, and overnight, the once makeshift Idomeni camp started to look like a permanent fixture.

The refugee camp sits as close to Macedonia as physically possible, some tents literally just an arm's length away from the former Yugoslavian state. Overall, the camp spans the area of a small town, with a population twice the size of Dingwall, but while the Highland town can boast a League Cup-winning football side, there is very little for those in the northern Greek settlement to celebrate. 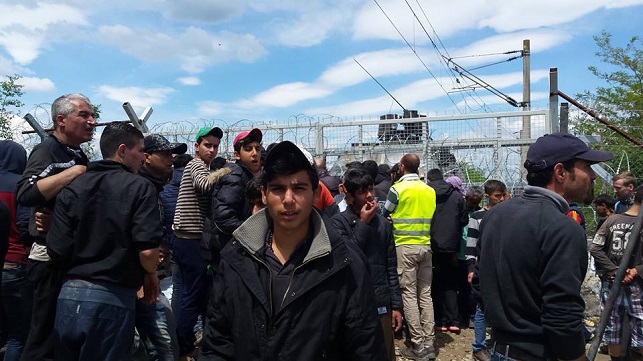 It is estimated that nearly half of Idomeni’s circa 10,000 inhabitants are children. There is some infrastructure, but the vast majority of the residents live in overcrowded tents, along the railway tracks and dotted across the fields.

For many weeks the camp resembled a scene of the last day of the world’s worst music festival. Media vans were parked, fires were burning between the tents, a line of taxis waited at the exit while thousands of people drudged round in the mud, tired and ready for a good night’s sleep.

Unlike the last day of a festival though, no one was about to go home. The bare, rolling land that was once used for nothing more than growing crops and grazing had overtaken Polikastro to become the largest settlement in the municipality of Paionia.

One man had to receive urgent attention when his throat was slashed as a tear gas canister hit him in the neck. Refusing stitches from medical workers, the man was just one of those who expressed a desire to no longer live.

As the EU Turkey deal edged closer and the fate of those arriving, as well as those already in Greece, began to change, numbers did dwindle. From a peak of over 16,000 to a total of just below 9,000, the population fluctuated daily.

For every bus that departed, destined for a military camp in Athens or Thessaloniki, hundreds of new inhabitants would arrive on foot, their worldly belongings strapped tightly to their backs. Aid organisations would re-adjust, a new patch of land would be claimed, and everything would continue as before, their new neighbours seamlessly adjusting to the ever changing situation.

It never became the humanitarian disaster zone it could have been, but life at the camp became one of drudgery for the vast majority of Idomeni’s inhabitants. At least nine out of 10 people you speak to will tell of boredom, of a never ending cycle where they are unable to find worth. 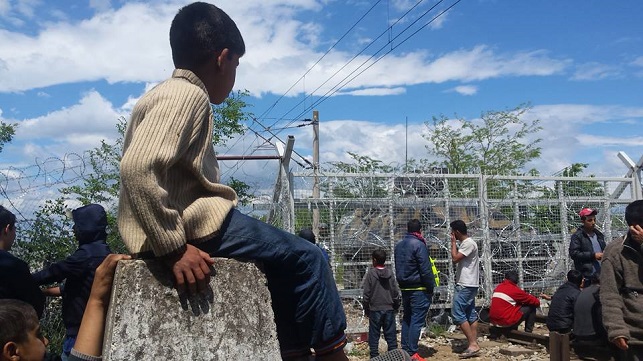 Every so often, though, there is a spark of anger, an explosion of emotion from within. This has been the case for months. Among the endless routine of queuing for your meals and aimlessly wandering the site, there are the few events which made the headlines.

There have been countless peaceful protests over this time, hundreds of signs made and waved and thousands begging for a sign of hope.

On 10 April, hundreds of refugees approached the border fence, seemingly believing the gates would open. Passage was quickly denied, but unlike so many previous protests, tensions escalated, and before long clouds of teargas masked the pastel blue sky.

The border fence in question sits just under 100 meters from the beginnings of the makeshift camp, and as teargas was fired and stones began to be thrown, panic spread across the sprawling settlement in an instant.

"The European leaders have abandoned these people behind closed borders in inhumane conditions. They are growing more desperate by the day: they have no access to asylum procedures, relocation or family reunification." Cristian Reynders, MSF

MSF confirmed that three children under the age of 10 were treated for rubber bullet wounds to the head. One teenage boy was rushed to hospital after he was struck by two of the bullets fired from the Macedonian military, one of which broke his leg. The other was feared to cause internal bleeding near his kidney.

Another man had to receive urgent attention when his throat was slashed as a tear gas canister hit him in the neck, deeply piercing his skin. Refusing stitches from medical workers, who said the contact was only centimeters away from being fatal, the man was just one of those who expressed a desire to no longer live.

Several teargas canisters fired by the Macedonian military travelled far over the protestors attacking the fence. At one point, the gas was even fired into an area occupied by the Greek police, who had to scatter to avoid the airborne toxins.

On this occasion, relations between the refugees and the Greek police onsite remained amicable. Officials from Greece attacked the use of "deplorable" force from the Macedonian officers. The usage of both the tear gas and rubber bullets were condemned by the Greek Government and aid groups across the camp, who accused the Macedonian police of serious misconduct. 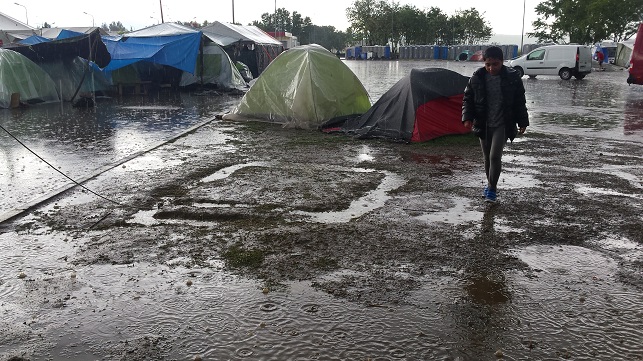 For over a month after this there was little to note in terms of real conflict. Flashpoints occurred on the border fence, but the Macedonian military were hesitant to do anything that would bring the camp soaring back into the media spotlight once again.

It was 39 days later, on 19 May last week, that real disruption occurred once again. Wednesday’s unrest came as a surprise to many, but it showcases the dramatic shift in the attitudes of both the Greek authorities and the refugees.

Hundreds of refugees pushed a disused train carriage towards the border fence, guarded by police. Where before the protest would fizzle out with no major incident, tear gas was fired en masse by Greek police for the first time.

Within minutes the tensions boiled over into one of the worst riots the camps have seen. Hundreds of women ran with their children, escaping the stinging gas spreading across the highly populated areas of camp. Rocks were hurled towards police who charged the advancing protesters, and several tents were set ablaze.

"Idomeni has become the symbol of the inhumanity of the European Union migration policies." Cristian Reynders, MSF

While the escalation to violence may have been a surprise, it did not come completely out of the blue. In recent weeks there has been a clampdown on the camp's residents, as well as the aid groups providing assistance to the camp.

The days running up to the riots had seen aid workers and medical teams being turned away from Idomeni, as well as any new arrivals. Be it a taxi or a bus, Police were turning back any vehicle heading towards any of the border camps which were carrying refugees.

Teams of aid workers were also being refused access to the camp because of a lack of official paperwork. As many as 27 volunteers were arrested on one day, for offences such as carrying a pocketknife and speeding. Workers from groups such as MSF (Doctors Without Border) and Aid Delivery Mission were arrested for transporting a refugee in their car.

Concerns about medical access and the wellbeing of the camp's residents are now being widely raised. According to volunteer coordinators, police are threatening to enforce policy that it is illegal for anyone to drive a refugee to hospital unless a doctor is present. 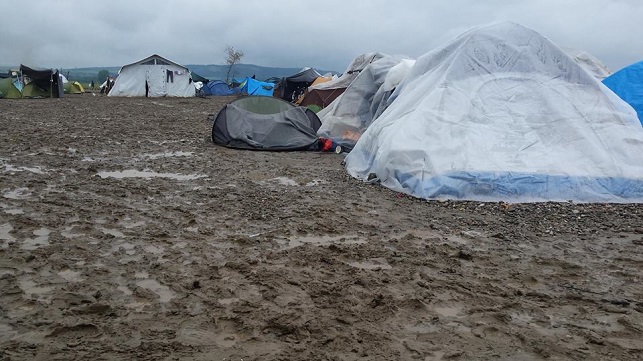 At the riots last Wednesday, MSF was forced to temporarily evacuate the camp when tear gas was fired directly into one of its tents. Twelve patients, five of whom were children, were forced to leave with them to an area on the camp's outskirts where the medical teams attempted to continue their activities.

Cristian Reynders, the Field Coordinator for MSF that day in Idomeni said: "I saw hundreds of women and children flee. Three long lines of scared people running away in fear. I didn’t sleep at all last night. It was awful to take the decision to leave these people who are in such desperate need.

"The European leaders have abandoned these people behind closed borders in inhumane conditions. They are growing more desperate by the day: they have no access to asylum procedures, relocation or family reunification. No humane alternative is being offered to them.

"Idomeni has become the symbol of the inhumanity of the European Union migration policies," he added.

With no "human alternative" on offer, some have even considered returning to where they fled from. Shiama left Syria in the spring of 2015 and spent 10 months in Turkey before boarding a boat to the Greek island of Chios.

With no "human alternative" on offer, some have even considered returning to where they fled from.

Speaking the day before the riots at Idomeni last week, the 25-year-old said her two younger brothers were having serious discussions about returning to their home on the outskirts of Damascus.

Through her broken English she could convey relatively little, but stuttering as she spoke, it was easy to tell that such a step would be a difficult one to take. Looking up with a glazed stare, she simply shrugged her shoulders and looked around, before shaking her head and turning back, saying: "This is no good. No good."

Shiama is not alone in her thinking. Various people have talked about returning home, but it is difficult to tell how strong their convictions are. Whether they would actually return home at this time of conflict or not, a breaking point has been reached.

For some, the European dream is clearly not worth the struggle anymore.