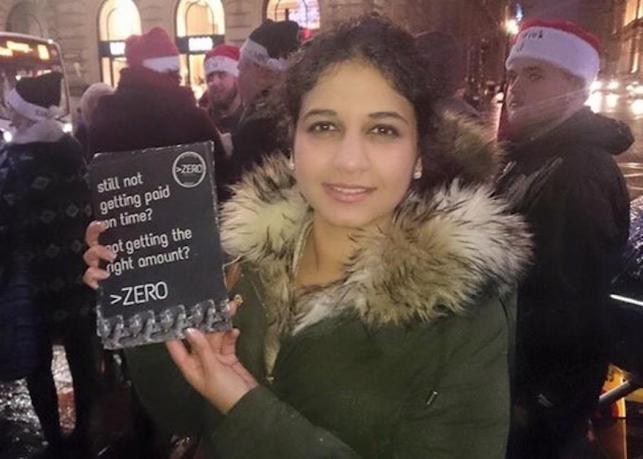 CAMPAIGN GROUP Better Than Zero (BTZ) will be consulted by SNP MP Stewart McDonald to help draft his private members’ bill opposing unpaid trial shifts for workers, and the group credits the efforts of grassroots activists for prompting the legislation.

McDonald announced his Unpaid Trial Work (Prohibition) Bill in parliament on Wednesday and the MP for Glasgow South told CommonSpace that he would be consulting both the Scottish Trades Union Congress (STUC) and Better Than Zero to create law to protect a vulnerable workforce open to exploitation.

Pencilled in for a second reading next March, the proposed bill will outlaw a practice, common in the hospitality sector, of offering people unpaid shifts with a view to permanent employment but without ever being paid for labour during the trial period.

Bryan Simpson from BTZ spoke to CommonSpace about the rise in prominence of his group and the prospect of helping to create legislation protecting a workforce exposed by unscrupulous employers. He said: “It’s an incredible opportunity to change the lives of literally thousands of workers.

“We know that its prolific within the hospitality sector just how many people do these unpaid trial shifts. It’s an incredible opportunity to change the lives and working conditions and financial situation of some of the poorest people working within the hospitality industry. But for us its testament to the activism of Better Than Zero that we’ve even got this far.”

Furthermore, Simpson believes the momentum grassroots movements now have is having a major impact on the political landscape throughout the UK: “The Tories wouldn’t be in the precarious position that they are in just now and Corbyn wouldn’t be so close to power if there wasn’t the grassroots push that there has been away from this kind of unbridled exploitation that five years ago did just seem to be the norm.”

Simpson credits the unity and resilience of group activists taking the fight to large corporations as the main reason for their success and insists it’s this bond that allows BTZ to push for change when the workforce is being exploited.

Having already tasted success against groups such as G1, Mooboo, Premier Inn and the Hilton, Simpson told CommonSpace that “direct action” is required in the fight against exploitation. He said: “If we were just a centralised organisation that was purely online and we only put press releases out, it wouldn’t  have the impact of direct action like getting 30/40 young hospitality workers who are up for a fight down to occupy their venue. I think the G1 stuff really hit home to companies that we were willing to do whatever was peacefully possible to make them change their ways.”

Better Than Zero started out in Glasgow, but now has 11 branches from Aberdeen to Dumfries. Their tactics include ‘flash mob’ occupations of company premises, social media ‘storms’ and ‘naming and shaming’ of immoral employers.

However, Simpson warned against complacency and said that although he welcomed McDonald’s push for change, his group would continue to stand up for workers’ rights: “We can change legislation but until we change the culture that permeates throughout the hospitality sector they won’t really be getting rid of exploitation.

“The point I want to make is its very important to change that legislation, and it’s a testament to the work that Better Than Zero is doing that we’re even at that stage of being able to influence legislation, but we must remember that we as a campaign need to exist. If we change that law next March Better Than Zero won’t go away, we will continue to lobby the companies first of all there will be hundreds of companies who just ignore it.”

A spokesperson for Unite said: “The disgraceful use of unpaid trial shifts is yet another example of the systematic exploitation of workers within the hospitality sector and those on precarious zero-hours contract in general. We know that these trial shifts are being used by companies like Hilton and Premier inn to cover bouts of absence with free labour. Through our Fair Hospitality campaign, Unite will be working with MPs to end the scourge of unpaid work, as well as supporting those workers directly affected by it.”

Picture courtesy of Better Than Zero.