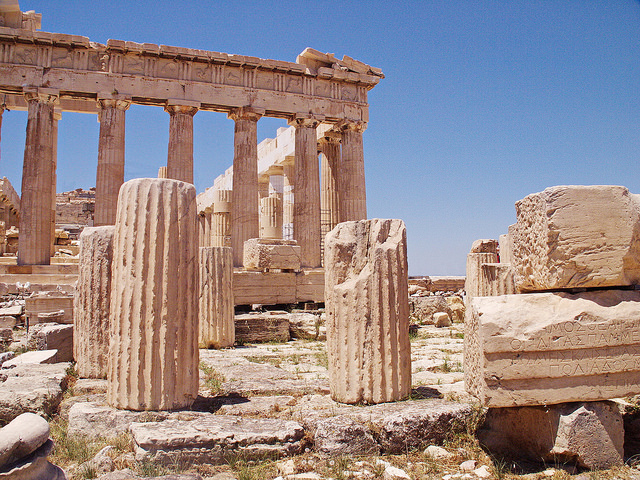 Patrick Chalmers, a former Reuters journalist and author of Fraudcast News: How Bad Journalism Supports Our Bogus Democracies, spoke to CommonSpace about his emerging series of nine documentary films about government by selection and deliberation.

Chalmers argues that, contrary to popular belief, elections may well be more of a hindrance than a help to democracy, and that Scotland could be perfectly placed to be a test case for innovation in how policy decisions are made.

“The idea we don’t live in a democracy is something people have trouble getting their heads around,” Chalmers says. “We’re brought up and we’re taught that democracy equals elections but actually this is not true – only in the last 200 years has this been the case.”

This, Chalmers says, is precisely why the political system is now experiencing such problems – from political distrust, to the over-simplification of complex debates, to the ineffectiveness of representatives in fulfilling electoral promises, to growing inequality and the rise of right wing populism.

“The more money you spend the more likely you are to get elected”. Patrick Chalmers

The Scottish expat, now based in France, has produced and released one film so far which highlights an example of how government by selection can work in practice. ‘When Citizens Assemble’ tells the story of the Citizens Assembly in Ireland which successfully overcame years of political deadlock on one of the country’s most controversial issues – abortion.

Through a process of deliberation, concluding with a series of votes and recommendations, the Assembly opted to amend the constitution and improve provision, marking a considerable liberalisation of the current law and practice.

Ireland, however, is not the first example of such a process, and nor should it be the last, Chalmers argues. The next film in the series, for which he will soon be crowd funding, will start at the beginning: in Athens. The Ancient Greeks used a form of lottery system, which, Chalmers explains, was a conscious decision to avoid elections which they viewed as “aristocratic”.

“They knew the richest people with the richest donors would win elections,” Chalmers says, and this hasn’t changed. It has been widely evidenced, he notes, that in contemporary politics, “the more money you spend the more likely you are to get elected”.

The ill-effects of the election system are in evidence in modern Greece, Chalmers says: “Government by election in Greece today is economic crisis and very little political autonomy. It’s very much the EU and IMF who are directing policy in Greece.”

Through the series, which will look explore real and hypothetical examples from around the world, Chalmers aims to demonstrate how democracy without election “produces better results”.

Although the series will not look at Scotland specifically, Chalmers says that Scotland’s “unique set of circumstances” following the independence referendum and the fallout from the Brexit referendum means that it could be well placed to make radical changes to its system of government.

READ MORE: ‘Of the people’: 5 ways a citizens’ second chamber could democratise Scotland

“Scotland is ripe for innovation – people are awake to politics in a way that I don’t get the sense is the case in the rest of the UK”, he says. “The country is also relatively small so the potential for change and innovation is greater.”

Chalmers points out that a proposal was set out early last year for a randomly selected second chamber in Scotland, which was detailed in a report by the left wing think-and-do tank Common Weal.

Chalmers explains: “Rather than the House of Lords – cronies who by virtue of having a title or having done a favour to the government have been given a position – you would have a revising chamber made up of a randomly selected group of people.”

This, he suggests, could be an ideal way to progressively implement a new kind of politics in Scotland, and prove that “people are smarter than we give them credit for”.

The core benefit of such a system, Chalmers argues, is the removal of the pressure to be re-elected which preoccupies political parties.

“If you don’t have to win an election you can look at all perspectives of an issue and not just the screaming headlines of the British press, which are often taken out of context,” he says.

“You wouldn’t have to worry about that or being re-elected. You are there for the period of selection, you are not relying on anyone to hold your position, and you are sheltered from the lobbyists from the oil firm or the wind farm or whatever else.”

“Parties get to power and want to stay in power – this is typical of a system based on election.” Patrick Chalmers

The current picture in Scotland, Chalmers says, is another clear example of the shortcomings of an electoral system.

“You’ve got the SNP who got an overwhelming majority in the Scottish Parliament, and you can raise legitimate questions about what they’ve done with it. My gut feeling is the SNP are bound to suffer from being in office,” he explains.

“Parties get to power and want to stay in power – this is typical of a system based on election. It is inevitable that you’re going to behave in a way that will keep you in office.”

Part of the problem with this system, Chalmers says, is its inherently adversarial nature.

“You need to be able to make decisions in a very hostile media environment and a hostile political environment. Your opponents are not going to say, ‘oh yeah, that’s a good idea, I agree with that’, because they need to win elections”, he says.

“You’re dealing with people who have to slag off the other party because otherwise they would make themselves invisible.”

Nothing short of a major overhaul of the system of governance will deal with the “root of the problem” plaguing democracies, Chalmers says.

For Scotland, Chalmers says he would personally favour independence because he believes that “democracy is done better at a smaller level”, and that greater autonomy to make political decisions is needed, not just in Scotland, but around the world.

However, he emphasises, in an independent Scotland the problem of elections would still remain to be solved.

In fact, Chalmers suggests, the deliberative process of decision making could be a better route to achieving independence than the kind of referenda Scotland and the UK have seen in recent years.

In both the independence and EU referendum, Chalmers says: “What you’ve got is quite divisive results. In those situations a black or white result is going to be unsatisfactory to a large group of people.

“If you had a citizens’ jury on independence or Brexit you could have much more room for well-informed and high quality discussion.”

There was too little of this during the lead up to the independence referendum, he says, and even less in the Brexit vote.

Through such a process, Chalmers suggests, “you could look at which aspects of political decision making should go in one direction or the other”, and from there you could then decide to hold a vote.

Chalmers acknowledges that a shift in how we think about democracy will take time, but the scale of the problems facing democracies at a national and global level means that progress has to start now. “We don’t have time to waste,” he says.