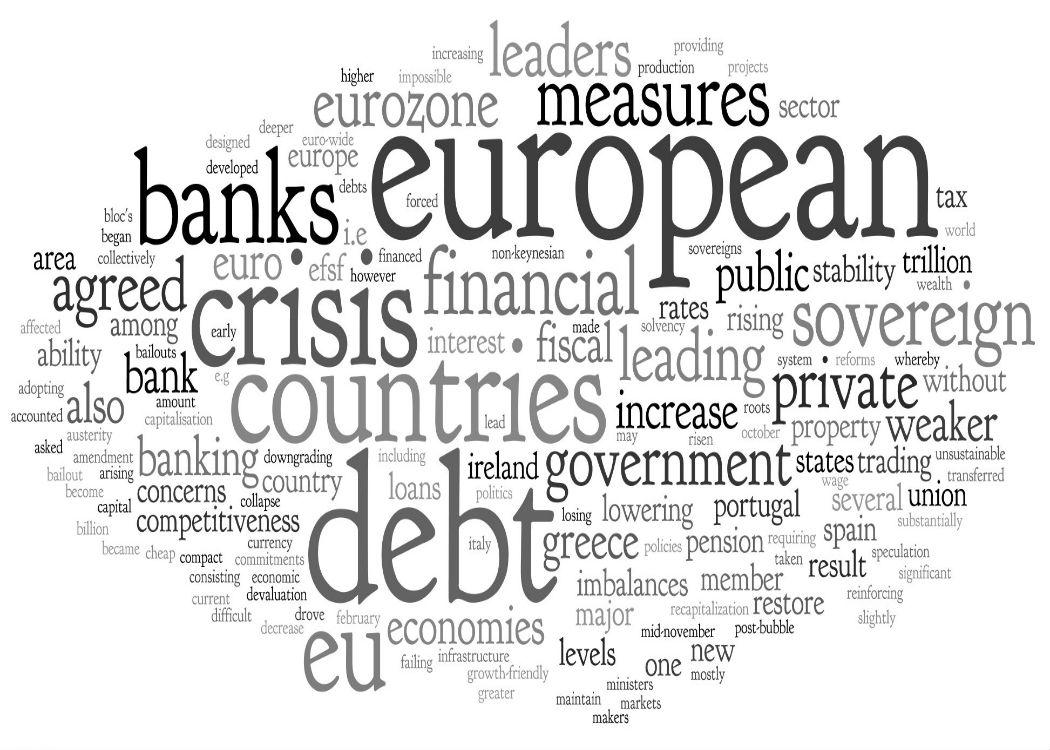 Ben Wray looks at how Germany had half of its debt written-off after the Second World War, and whether there is any lessons for the Greek crisis today

ON Friday 25 January an ultimatum was put to the Greek Government to sign the proposal of the Troika – IMF, European Central Bank (ECB) and the European Commission – or else the plug will be pulled on the life support machine that has kept Greek banks alive for five years.

The Greeks didn’t bite, but what we know about that proposal is that it did not contain any commitment to debt relief for Greece, a key factor in Prime Minister Alex Tsipras turning to the Greek people to hold a referendum.

Now the question of debt has become decisive, as the Troika is divided between the IMF and the ECB over whether Greece should get debt relief.

The IMF broke ranks to say that Greece needs a substantial debt write-off and it will no longer support any deal that does not contain debt relief, a shot in the arm for the ‘No’ campaign in the referendum that wants to reject the 25 January deal from the Troika which said nothing about restructuring Greece’s debt.

With the question of the Greek debt suddenly shooting back to the top of the agenda, perhaps the story of the German debt write-off in 1953 deserves to be told once more.

Why does debt relief matter? Greek debt is 175 per cent of GDP; an unsustainably high level. It got there because of bad decisions to take out loans the banks couldn’t afford.

The bad decisions were on both sides: Greek banks wanted cheap loans for property speculation and German banks wanted to sell cheap loans because it made it easier for German exporters to sell to Greece. Neither side was worried about unsustainable debt pre-2008.

Prior to Tsipras’ election, he explained to Channel 4 journalist Paul Mason why a 50 per cent write-off of Greek debt was justifiable.

He said: “This is not the first time something like a debt write-off has been implemented. It happened in 1953 in Germany.

“And I am wondering on what ethical grounds does Germany refuse a solution to the European problem, which it benefited from many years ago, when coming out of world war two, and when Germany itself had many open wounds?

“The money you have been giving all these years wasn’t spent to keep the Greek people on their feet. Instead it was used to recapitalise bankrupt banks, so that the banks and the financial system not only in Greece but the whole of Europe would not collapse. You gave Greece toxic money. Now it’s time to find a solution for the common good.” (Click here to read more).

Since then, Tsipras and the Greek Government have had to water down its debt write-off demands significantly in the face of Troika intransigence, backed by a belligerent German Government.

But with the question of the Greek debt suddenly shooting back to the top of the agenda, perhaps the story of the German debt write-off in 1953 deserves to be told once more.

German debt in 1953 was 25 per cent of national income, low compared to Greece today but high enough at a time before the hyper-financialisation of the world economy to undermine the ability of the German government to make the investment needed to recover from the destruction of the Second World War.

The debt was owed to countries all over the world – as far afield as Zimbabwe and Pakistan were lenders to West Germany. And of course just about every European nation, including Greece.

The deal that was agreed was, compared to the demands put on Greece, incredibly generous. 50% of Germany’s debt was written off, including to private creditors as well as nation-states.

The debt was divided into two: punitive reparations from the World War One Treaty of Versailles was 16 billion deutschemarks, while the intensive rebuilding after the obliteration of World War Two amounted to another 16 billion.

Leaders met in London to discuss what to do. They wanted West Germany to recover because of the lucrative nature of the German export industry, but also because of the geopolitical threat faced from the Soviet Union which controlled East Germany.

The last thing the United States wanted was for West Germany to fall into the hands of the soviets, too. The London Conference began on 27 February, just a week before Soviet ruler Joseph Stalin passed away.

The deal that was agreed was, compared to the demands put on Greece, incredibly generous. Fifty per cent of the debt was written off, including to private creditors as well as nation-states.

The repayments for the rest of it was tied to the performance of the West German economy: the country would only pay when it was in trade surplus, and repayments were limited to three per cent of export earnings. That meant creditors had an incentive to import German goods.

Nick Dearden, director of Jubilee Debt Campaign, which advocates debt justice internationally, said the London Agreement was crucial to the reconstruction of the German economy, and should act as a guide for how to treat Greece today.

He wrote in the Guardian: “The debt deal made with Germany in 1953 meant western Europe was reconstructed successfully and thrived. Today Europe has been forced into its worst crisis since the Second World War by the actions of Europe’s leaders.” (Click here to read more).

Tsipras’ initial demand, for a 50 per cent debt write-off and to tie future repayments to the performance of the Greek economy, appears similar in nature to that of Germany, but has been rejected thoroughly by European leaders, not least by Germany.

The argument from EU leaders is that the bailout money they have provided Greece has been a lifeline, but analysis of the Greek debt makes it look more like an anchor.

The Jubilee Debt Campaign has carried out extensive research on Greece’s debt, and found that just 10 per cent of bailout loans have gone towards the Greek population.

The vast majority has been used to pay banks and international creditors. EUR42.7bn of Greek government debt payments, nearly one-third, has gone towards paying back interest on the loans. Seventy-eight per cent of Greek debt is owed to the Troika.

The Jubilee Debt Campaign has carried out extensive research on Greece’s debt, and found that just 10 per cent of bailout loans have gone towards the Greek population.

As Tim Jones, author of the research, surmised: “The bailouts have been for the European financial sector, whilst passing the debt from being owed to the private sector, to the public sector.” (Click here to read more).

Peter McColl, Common Weal policy unit director, tells CommonSpace that while the German position is clear “hypocrisy” the problem today lies with the structure of the Eurozone and the roll played by the EU’s big “institutions”.

McColl said: “The hypocrisy of Germany’s failure to reciprocate Greece’s debt write off in 1953 is striking. But what we need to understand is that the Eurozone project was always going to produce an outcome like this.

“Interest rates were set for much of the early 2000s to allow the slow-growing German and French economies to keep afloat. This created property asset bubbles in countries like Ireland and Spain that have caused untold damage, and a contagion that spread to Greece.

Mike Danson, professor of enterprise policy at Heriot-Watt University, said that the German post-WWII example was apposite to the current situation with Greece.

“Saddling a nation with debts and penalties because of the acts of their fathers can lead to disastrous outcomes, and the European Union was founded to avoid such courses of history repeating themselves,” Danson said.

Danson added that the arguments of the creditors – that it would create a “moral hazard” in the EU if Greece was allowed to get away with its debts – was “game-playing” and needed “to stop”.

“They [Greece] can’t go back and change previous governments or crooked bankers,” he added.

The German 1953 debt relief was led by the world’s new superpower, the United States. Today, the US, a much longer in the tooth superpower, is not in a position to be making the decisions over Greece, but it’s quite clear that Washington state department is on the side of the IMF in pushing for debt-relief to be part of the deal.

Why? Not out of any goodness of their heart, but because of similar concerns as to why Germany’s debt was written off over 60 years ago: concern for the global economy and concern about Russian power, with Greece bordering the Balkans, a key geostrategic area the US and Russia have long fought over.

“The hypocrisy of Germany’s failure to reciprocate Greece’s debt write off in 1953 is striking. But what we need to understand is that the Eurozone project was always going to produce an outcome like this.” Peter McColl

As Yale University Professor Timothy Guinnane said: “The US was basically the last man standing after the war and essentially decided to cut Germany’s debt in half. It was a hard-nosed decision…it’s wrong to say it was an act of generosity.” (Click here to read more).

The future of Greece will never be as crucial as the future of a country like Germany to the United States: on the global stage, Greece is a tiny country with a tiny GDP.

But a small detonator can trigger wider panic: Asian stock markets are down since Greek banks were closed, and Washington policy-makers fear the Chinese economy slowing down, which could trigger a recession in the States.

There appears to be little willingness to talk about 1953 in Germany: in a sense it is understandable that the country doesn’t think it should have to compare war reparations and war reconstruction with the current situation facing Greece.

But in a country that has had a depression far worse than any experienced in the Western World in the Great Depression of the 1930’s, Greece, like Germany in 1953, is one of the great tragedies of our age. Historic times call for historic measures.