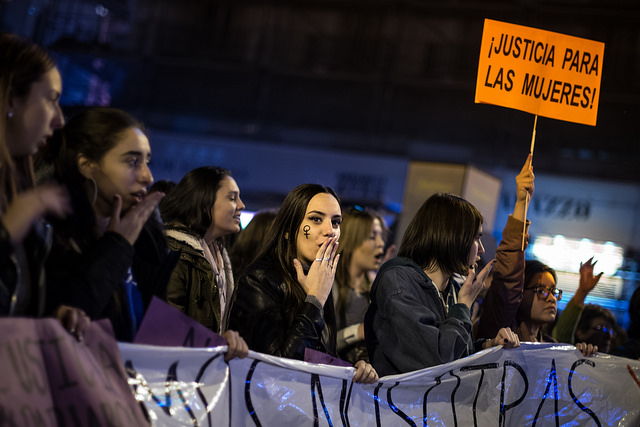 FOR THE second time this year, Spanish women have taken to the streets in their thousands to protest the country’s patriarchal systems – this time, taking aim at the criminal justice system.

Last week, a court in Pamplona ruled that five men were guilty of ‘sexually abusing’ an 18-year-old woman during the city’s bulls festival in 2016, but acquitted them on charges of gang rape, resulting in significantly lighter sentences.

Over 35,000 people protested in Pamplona over the weekend, sparking demonstrations in other cities around the country. A trending hashtag emerged on social media – #Cuéntalo, meaning “tell your story” – through which high profile and ordinary women alike have shared their stories of sexual assault, much like the worldwide Me Too movement which rose to prominence late last year.

“In the last few years in Spain and the rest of Europe, people are becoming aware of the patriarchal system.” Jule Goikoetxea Mentxaka

Now, the Spanish Government has said it will consider making changes to the law to prevent future rulings of this kind.

Jule Goikoetxea Mentxaka, a Professor at the University of the Basque Country, researcher at the Oxford International Gender Studies Centre and member of Eragingune, a major feminist coalition in the Basque Country told CommonSpace why she feels this is a significant moment for the feminist movement in the region and Spain as a whole.

“We’re in the fourth wave of feminism, in Spain and around the world. In the last few years in Basque Country and across Spain and the rest of Europe, people are becoming aware of the patriarchal system.

“This is not the first time this has happened – these kinds of sentences are given every day, but this is the first time it’s had this reaction from the feminist movement.

“What we’ve seen with this reaction is that the feminist movement in the Basque country is very articulated, thanks to the work they have done over the last 10 years – this response is a crystallisation of that.”

Goikoetxea said this had to be understood in the context of the demonstrations of March 8 of this year, which saw the biggest general strike of women in Spain to date. The strike was a protest against inequality faced by women in the workplace, including job insecurity, wage inequality, the glass ceiling, and sexual harassment, and included a major strike of women in the media and communications in opposition to the male dominated nature of the industry.

“The feminist movement has opened its doors, for example to women exploited in the workforce, as women are commonly in precarious work. In March we saw more links with women from unions and working class women, and these women have become more involved in the movement,” Goikoetxea said.

The coming together of women from all sections of society to address these issues, Goikoetxea said, is why such a powerful response has emerged around this case. “The reaction over the last few days has been not only from those already involved in the feminist movement but from every type of woman, younger and older, women in universities, women who work at home, and professional women from all sectors,” she explained.

The high profile case, which found that the men had boasted of the assaults in a WhatsApp group called “La Manada”, meaning “The Pack”, calls to mind similar cases from elsewhere in the world such as the recent controversial Belfast rape trial where four men were aquitted despite messages in evidence which showed the accussed bragging about “spit roasting” a woman.

In the Spanish context, Goikoetxea said there were particular challenges to overcome due the nature of the Spanish state, which she said is becoming increasingly “authoritarian” –  a view she said was shared by the feminist movement and the broader Spanish left.

“One of the proposals is to get independence in order to achieve the high levels of democracy which won’t be achieved under the Spanish state.” Jule Goikoetxea Mentxaka

However, she explained, the specific question of independence for Catalonia and the Basque Country brings its own divides which must be breached within the movement. “Some on the Spanish left say it’s not necessary to create new states with globalisation, whereas others support Catalan and Basque self-determination.

“Feminists in the Basque country and in Catalonia have also been very divided on this issue. One of the proposals is to get independence in order to achieve the high levels of democracy, even in relation to patriarchy, which won’t be achieved under the Spanish state.”

That being said, Goikoetxea said the issue was not “omnipresent” and that feminists continued to work together on issues relating to women’s equality. “It won’t prevent progress on feminist issues in Spain,” she added.

Going forward, the feminist movement has a series of demands, and Goikoetxea said she is hopeful that significant progress might be achieved. Already, she said, the potential of this kind of collective action has been evidenced by Spanish Government’s expression of willingness to rethink the law around sexual assault. “Obviously one law doesn’t change everything, but it shows what can be achieved in a short time,” she said.