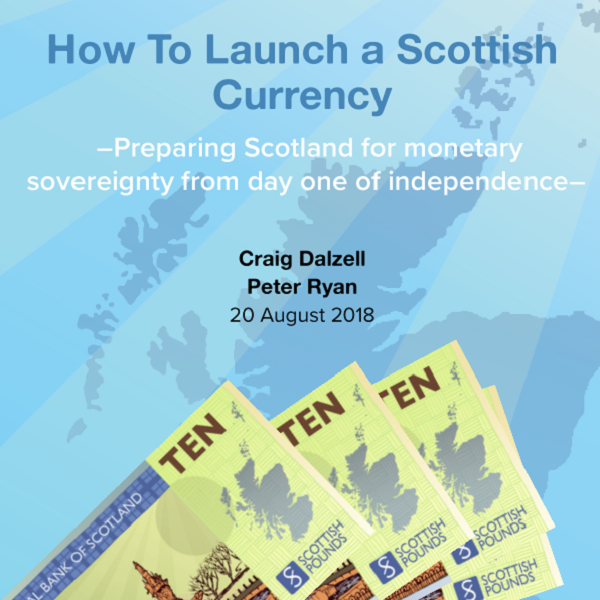 Common Weal launches a major new campaign supporting the proposal that an independent Scotland should have its own currency by day one of independence.

Common Weal believes that an independent Scotland needs its own currency. This is the core message of a major new campaign to influence and add to the discussion around what independence should look like and what it should mean.

The first in a series of papers – How to Launch a Scottish Currency examines the case for an independent currency by comparing this proposal to those made by other groups such as the proposal to “Sterlingise” and to unofficially use the UK Sterling for an extended period after independence. You can read the paper in full here.

The Sterlingisation proposal would leave Scotland without adequate control over monetary policy and would make itself vulnerable not only to the London financial markets from whom Scotland would have to borrow money but it would also be vulnerable to global financial shocks which may render those markets unable to loan money under any conditions.

The process of launching a new currency is a technical one but it is more than possible for Scotland to do successfully (as many other countries have in the recent past). The process that Scotland would follow would closely match that used during the creation of the euro.

Essentially, this is a three year process which first involves recruiting for establishing the Scottish Central Bank, setting up the IT infrastructure required to allow the creation of new bank accounts and payments systems, and launching a public contest to design the notes and coins.

Through the second year of the transition, those who choose to set up new Scottish currency bank accounts may convert savings from Sterling into the new currency effectively by selling Sterling to the Central Bank in exchange for Scottish currency (the value of which would be pegged 1:1 with the UK Sterling). Shops may also begin to dual price their goods and services in both currencies. The Central Bank will begin to build up Scotland’s foreign currency reserves with a target of reaching a value of $40 billion by independence day.

By year three, other departments like Revenue Scotland and Social Security Scotland will be sufficiently operational to allow the payments of devolved taxes and social security in the Scottish currency for those who wish to do so. A cut-off date (independence day) would be set after which all taxes and social securities must be paid in Scottish currency. The public design contest will have concluded and the new notes and coins may be minted. ATMs, vending machines, till and other devices can then be modified to accept the new currency – just as they are at the moment whenever a new coin or banknote is released.

Once the currency is launched and Scotland becomes an independent country, it will be responsible for managing its currency in the same way that every other country that has its own currency is responsible for theirs. This may include defending the currency against speculative attacks or shifts in the financial markets. The process for this involves using the powers of the Central Bank to change interest rates and adjusting levels of the country’s foreign exchange reserves. Lingering memories of the UK’s unsuccessful defence of the pound during “Black Wednesday” in 1992 have left some commentators pessimistic about the UK’s (and, by extension, Scotland’s) ability to mount a successful defence should one be required in the future but an objective examination of the history of such attacks has shown that a majority of them fail and are successfully defended against. The key to doing so is to have a confident government that shows a willingness to defend the currency (which acts as a deterrent against mounting a risky attack) and to maintain the value of the currency at an appropriate level for the needs of the economy (which minimises the profits that could be made by speculators in the event of a successful attack thus minimises the likelihood of them attempting one).

This paper draws upon and expands Common Weal’s previous work on currency to make a detailed and logical case not just for the reasons why an independent Scotland should have its own currency but also lays down the process by which this can be done. The alternative proposal – that Scotland should Sterlingise for an indefinite period of time and then attempt to form a new currency later – is shown to be significantly weaker and makes Scotland more vulnerable economically and less able to change policies once independent.