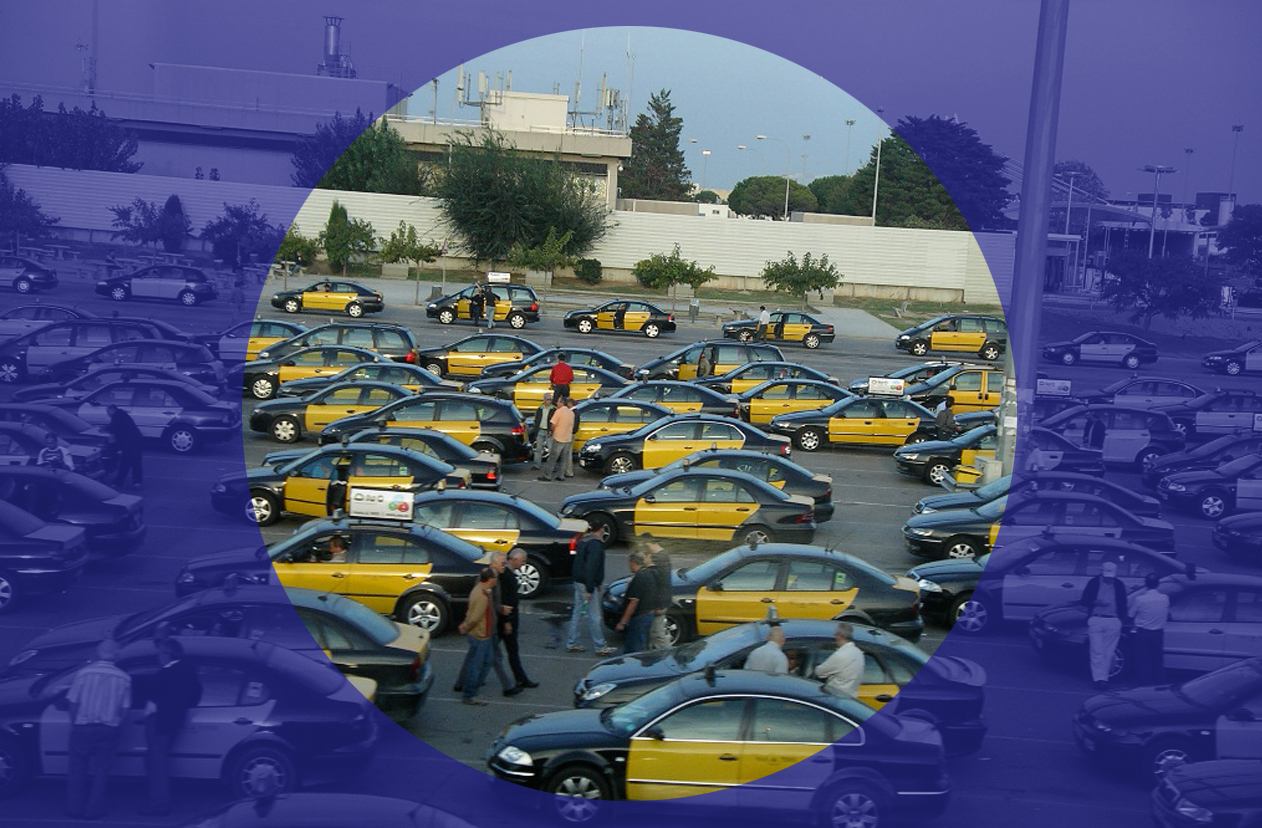 Carlos Rodriguez Expósito of the Taxi Project 2.0 in Spain says the unity and strength to resist ‘Uberisation’ was developed over many years of organising and struggle. Now, taxi drivers are expanding their range of tactics. FOR a few years now, the taxi industry’s struggle against platform capitalism, the so-called ‘Uberisation’ of the economy (or rather, […]

Carlos Rodriguez Expósito of the Taxi Project 2.0 in Spain says the unity and strength to resist ‘Uberisation’ was developed over many years of organising and struggle. Now, taxi drivers are expanding their range of tactics.

FOR a few years now, the taxi industry’s struggle against platform capitalism, the so-called ‘Uberisation’ of the economy (or rather, the latest twist in wild neoliberalism), has been on the lips of many. Sometimes that has been as an example of resistance, above all for other affected workers’ collectives, and sometimes as a danger to the raw interests of the great powers that are behind the wrongly-named “collaborative economy”.

We have garnered a reputation for struggle, but the truth is that has not always been the case. In fact, it has been rather a difficult road to get here.

Building unity out of division

Taxis in Spain have traditionally been a sector which – although they have been subject to the same rules, be they municipal, regional or state – has always been very heterogeneous. Each one worked his taxi as he or she considered, and something similar happened at the general level. There was little unity among the workers themselves and even less with the other collectives in struggle.

This is very important in order to be able to situate ourselves in the context in which the platform companies looked at a sector like the taxi when trying to dominate passenger transport. The platforms saw an easy target: a sector with a markedly public character in terms of regulating its activity; at times does not enjoy the full support of the administration; and which does not have the cohesion necessary to act as a retaining wall in the face of an attack by external agents. Given the corruption that reigned in the years in which ‘Uberisation’ began, it would probably be easy for these neoliberal companies to convince politicians to modify the laws to their liking and in favour of their interests, against those of the worker.

Because in the end, it is only the same power that is behind these supposed ‘innovations’ in the capitalist model. The same power that has been subduing the workers and dictating the laws for centuries. The insatiable monster of neoliberalism executing new macabre methods to continue filling its pockets with large profits at the expense of labour exploitation, of cuts in the rights of the workers and of contributing nothing to the wealth of the country where they operate with various extractive schemes including tax evasion and avoidance.

Fortunately, in the plans of the platforms they did not count on the capacity for organisation and the sacrifice of Spanish taxi drivers. They believed the taxi driver did not have the strength and the desire to continue carrying out their profession and to maintain their taxi, like their job, nor the commitment to maintain a service with guarantees for the citizens. Neither did they count on the fact that the taxi is a way of life as well as a business, and when a person tries to steal his way of life, he stands up and defends himself with all the consequences. When workers in the same sector organise, those at the top tremble. They didn’t expect that either.

In all this struggle, there were moments of fear, panic, uncertainty and not knowing what was going to happen, of not having a clear future. But those same moments is when our spirit comes out, and in that same moment, the sector changed. New proposals and new organizations were born with a style and a way of fighting that was different from anything that had been seen before. Without any obstacles, without complexities, and with a lot of desire not only to defend the sector but also to counterattack.

This is how Elite Taxi was born; more than an association, a movement. More than a movement, a way of life. Alberto ‘Tito’ Álvarez played a crucial role in developing the firm foundations for Elite Taxi; an example of struggle, sacrifice, perseverance and above all with a winning intelligence and mentality and a gift for getting the best out of people when they are most needed in the struggle that made any objective possible no matter how complicated it might seem.

In this way the sector was advancing, losing some battles but winning important wars. Because it was not only Elite in Barcelona who rose up against the power of wild neoliberalism, but in Madrid the majority association today, Federación Profesional del Taxi de Madrid, took steps forward, even after losing the first legal battle against Cabify. They continued to fight, mainly in the courts, with a lot of work and very good criteria in putting forward a legal appeal. Following the ruling of the European Court of Justice against Uber in 2017, a series of struggles led to the overturning of all domestic regulations to give uncontrolled entry to the vehicles of Uber and Cabify.

The state together with two corporate giants against a group of taxi drivers. David against Goliath. And thanks to the Federation, we were able to win. An achievement by taxi drivers in general, all of them, but which was made possible by the fuse lit by the Elite in Barcelona.

In recent years we have moved from the ordinary taxi driver to the activist or the legislative expert. We have gone from inexperience in the face of aggressive and deceptive marketing to guerrilla warfare on social networks, counteracting campaigns and improving the image and visibility of the Taxi. In the case of Elite Madrid, they are actively participating in support of other groups of workers affected by abusive practices and the exploitative zeal of neoliberalism, whether they be small businesses or the self-employed. This is an evolution that would not have been possible without the initial motivation to believe that there is a future for the taxi sector, where it will continue to face down the challenge from platform capitalism and the next neoliberal invention that stands in our way.

It is no longer like in the beginning; now we are no longer alone. Platforms like ‘No + Precarity’, formed by people who suffer from the sharpest edges of neoliberalism; those affected by mortgages; Riders; ‘Kellys’ (domestic cleaners); Pensioners; the Tenants’ Union; longshoremen; home carers; Coca Cola workers in struggle; Vodafone workers in struggle; Telepizza workers in struggle; and dozens of collectives that make us have a hopeful horizon where we will reach victory.

We have advanced, we have improved, we have learned from our mistakes and we are stronger to solve the problems to come. And the product of all this experience, almost like a natural evolution, is the Taxi Project. Bigger, more ambitious and above all the objective to extend our fight and our experience to the rest of our colleagues in Europe and the rest of the world. A project that, with the help of experts like the Ekona economic innovation co-operative, tries to reach where the taxi driver can not reach. Where first class professionals are needed to fight back and defend our rights and those of all of us.

Because the enemy is the same. We are prepared. From Taxi Project we have brought the future and we want any worker, not only taxi drivers, who are suffering under this regime, to be part of our struggle. We will continue to fight until we push them back. We are the resistance that holds out and strikes back.

We continue to work!