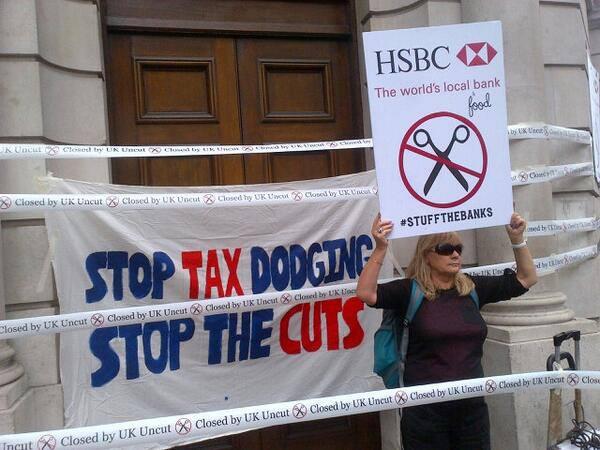 THE bosses of HSBC bank, which faces global criminal investigations relating to its handling of secret Swiss bank accounts, have apologised.

Gulliver showed remorse for HSBC hoarding the wealth of global tax avoiders without the knowledge of national tax collectors.

“It clearly was unacceptable, we very much regret this, and it has damaged HSBC’s reputation,” he told the MPs.

Gulliver was asked about his own tax affairs. While he lived in Hong Kong his bonuses were placed in a Swiss bank account through a company in Panama.

“I can understand how people find these arrangements quite unusual,” he admitted, while claiming the arrangement was to protect his privacy.

Leaked files from the British headquartered bank revealed a scheme for 100,000 wealthy global clients to place over $100bn in Swiss accounts.

However, authorities in Britain have been more muted in considering legal action.

Jennie Granger, the director general of enforcement and compliance at HM Revenue and Customs (which could have called for a criminal investigation), told the committee that the evidence passed to them from HSBC whistleblowers was not of sufficient quality for prosecution.

Others have challenged this position. Former director of public prosecutions Lord Ken Macdonald QC said there was sufficient evidence for the bank to be investigated for conspiracy to defraud the tax authorities.

At the time of the leak, former First Minister Alex Salmond called for a police investigation in the UK.

Writing in the Courier, he said: “Forget HSBC’s grovelling apologies a full eight years after the event. These are allegations of a conspiracy to break the law. It is the police who should, therefore, investigate.”

According to financial journalist Ian Fraser, this leak related to $500bn of assets which were not supposed to be in the bank, including dirty money from crime, the drugs trade, cash from blood diamonds trafficking, and funds that customers were seeking to squirrel away from the tax man. (click here to read more)