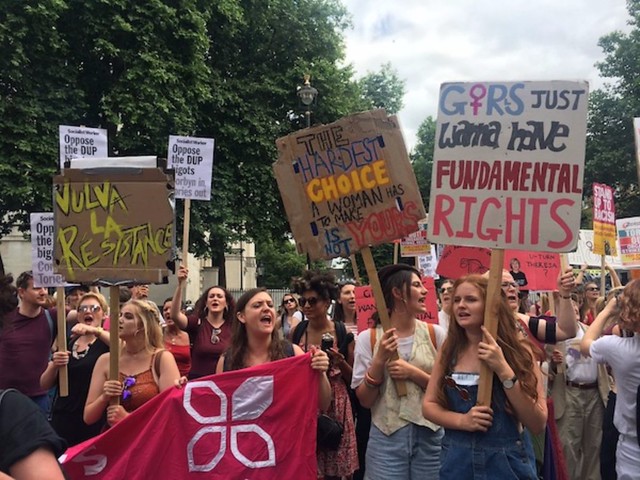 TIE campaign calls on all Scottish MPs to vote in favour of the two amendments, “and take a step towards delivering these long overdue rights”

This follows speculation and uncertainty over whether the party would abstain, as it generally does on matters relating to other devolved parts of the UK.

Originally intended by the UK Government as a means of allowing more time for the restoration of Northern Ireland’s Assembly, which has not functioned since power-sharing talks broke down in March 2017, the Northern Ireland Executive Formation Bill has instead become the potential vessel of significant social change in Northern Ireland, following the addition of several amendments. The Speaker selected from those amendments for inclusion in the legislation.

Labour MP Conor McGinn’s amendment will lead to the legalisation of same-sex marriage in Northern Ireland if the devolved legislature remains non-functional by October 21.

In these circumstances, we believe it is right to give MPs a vote on these important human rights issues. If the amendments are called to a vote, I will be voting in favour.

In November 2015, a majority of MLAs in the Assembly voted to support equal marriage, but the measure was blocked by the Democratic Unionist Party (DUP) using the Petition of Concern, a voting mechanism designed to protect the rights of minorities. In the past, Prime Minister Theresa May’s government has repeatedly refused to intervene, arguing that equal marriage is a matter for Stormont.

Labour MP Stella Creasy’s amendment will legalise abortion throughout Northern Ireland, where it is currently only allowed in cases where the mother’s life is at risk, or if her mental or physical health is threatened.

“I’m very proud that @theSNP government introduced the UK’s most progressive equal marriage law, and that Scotland is the only part of the UK where couples from Northern Ireland can covert their civil partnership to a same-sex marriage.

“While @theSNP will always defend the principle of devolution, there are a specific set of circumstances in Northern Ireland where there has been no functioning Assembly for an extended period.

“In these circumstances, we believe it is right to give MPs a vote on these important human rights issues. If the amendments are called to a vote, I will be voting in favour.”

Shortly after it was posted, Blackford’s statement received the endorsement of First Minister Nicola Sturgeon, who retweeted Blackford’s thread with her own comment: “I’m not in the House of Commons but if I was, I’d vote for amendments on NI equal marriage and women’s right to choose for the reasons @IanBlackfordMP sets out here. I fully support devolution principle but there is no functioning NI Assembly just now and human rights matter.”

Further details were provided by SNP MP Stewart MacDonald, who tweeted: “On the issues of equal marriage and abortion in Northern Ireland, SNP MPs will, in line with other parties, will [sic] exercise free votes. Given the situation in NI, this is the right thing to do. If the amendments are called, I will vote in favour of both.”

So far, in addition to Blackford and MacDonald, SNP MPs Joanna Cherry, Hannah Bardell and Tommy Sheppard have also stated that they will vote in favour of the amendments.

Prior to Blackford’s clarification, the possibility of SNP abstention on the amendments provoked widespread criticism from Scottish progressives and LGBT rights campaigners, both in and outside of the party.

Earlier today, the SNP’s national women’s and equalities convener Fiona Robertson commented: “Our friends and family in NI do not currently have a functioning devolved assembly, and haven’t for years. If it was in operation, there sure, we would be on rocky ground in voting on decisions solely affecting NI, but that’s not the case here.”

“These issues absolutely transcend politicking – they are about basic equality. We would encourage all Scottish MPs to vote in favour of the amendments, and take a step towards delivering these long overdue rights.” TIE campaign spokesperson

Scottish Green Party co-convener Patrick Harvie also remarked: “Normally I can understand the SNP’s abstentionist position on votes that don’t apply to Scotland. But these aren’t normal times. Stormont is not functioning, so MPs – all MPs – are responsible. They should treat the abortion & equal marriage votes as basic human rights issues.”

Today’s developments would appear to represent a U-turn for the SNP Westminster group, following yesterday’s statement from SNP MP and Northern Ireland spokesperson Gavin Newlands, who was reported as saying last night: “It is a long-held principle that we on the SNP benches do not vote on matters devolved to other parts of the UK…We intend to stick to that principle.”

Sources suggest that the SNP’s reversal was the result of intense behind-the-scenes pressure from some SNP figures, one of whom was identified by the Scotsman newspaper’s Westminster correspondent Paris Gourtsoyannis as Cherry, following her own declaration that she would be voting in favour of the amendments.

Speaking to CommonSpace before the vote in the House of Commons on Tuesday, a spokesperson for the Time for Inclusive Education (TIE) campaign commented: “Today, MPs will vote on whether to deliver marriage equality and open access to abortion in Northern Ireland if the proposed amendments to the Bill are accepted.

“These issues absolutely transcend politicking – they are about basic equality. We would encourage all Scottish MPs to vote in favour of the amendments, and take a step towards delivering these long overdue rights.

“Same-sex couples in Northern Ireland have been denied a fundamental, equal right which has been granted to their counterparts across the rest of the UK.

“MPs have the opportunity today to ensure that the LGBT people of Northern Ireland – who have been without a functioning Assembly for over two years – can enjoy the same right to equal love as the rest of us across the UK, and it is one which must be taken.”

“If devolved government returns within three months, then we will resume our campaign at Stormont. Meantime, Westminster should move to end this injustice.” Northern Ireland director of Amnesty International Patrick Corrigan

Patrick Corrigan, the Northern Ireland director of Amnesty International, has also called on MPs to vote in favour of the amendments, saying: “With no Stormont government in place for almost two-and-a half-years, and the UK government refusing to extend equal marriage to Northern Ireland, we have been working with Labour MP Conor McGinn, Conservative Lord Robert Hayward, plus MPs and Peers from the main parties in Westminster to secure marriage equality legislation via the backbenches.

“We have worked with Conor McGinn on this amendment and we expect it to secure strong support, so that second-class citizenship for LGBT+ people in Northern Ireland can finally be ended.

“If devolved government returns within three months, then we will resume our campaign at Stormont. Meantime, Westminster should move to end this injustice. If the Assembly is restored at some point in the future, then members there can legislate as they see fit, but with a large majority of MLAs in favour of equal marriage, we know that there will be little appetite to see this measure overturned.”