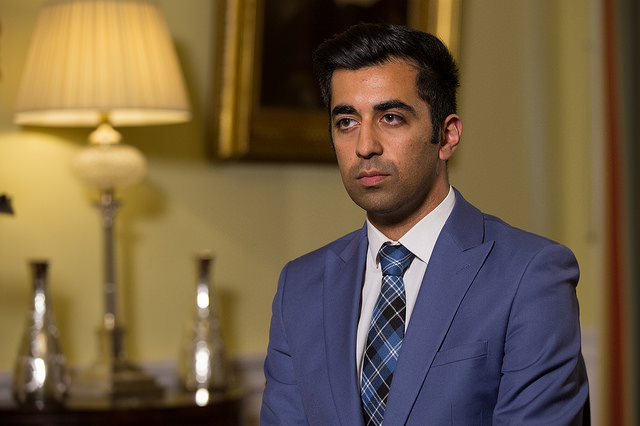 COUNCILLOR JIM DEMPSTER of Dumfries and Galloway Council has been urged to stand down by transport minister Humza Yousaf over Islamophobic remarks, after Labour suspended him from the party on Thursday night.

Dempster made the comments, to which he has admitted, during a meeting with transport officials on Tuesday 13 March in relation to Yousaf’s visit to the village of Sprinholm. He said: “He may have been at Springholm but no one would have seen him under his Burka.”

The Labour councillor was suspended by the party on Thursday night pending an investigation, but the target of the comments Humza Yousaf has urged him to stand down from his position in the meantime, and for Scottish Labour leader Richard Leonard to expel him if the allegations are confirmed.

“Islamophobes and racists will never silence me and I will challenge them at every possible opportunity.” Transport minister Humza Yousaf

The transport minister has said he will also report the remarks to Police Scotland and submit an official complaint to Dumfries and Galloway Council.

Yousaf said: “Jim Dempster should do the honourable thing and resign as a Councillor. As elected members we are rightly held up to the highest standards. Using hate speech of any kind in such a deliberate and malicious way is simply not acceptable and makes Cllr Dempster’s position untenable.

“The fact Cllr Dempster was able to make such hate filled remarks, in a meeting with Government officials and members of the public present shows how emboldened those with Islamophobic views are.

“Islamophobes and racists will never silence me and I will challenge them at every possible opportunity. Collectively, we all have a duty to root out hatred wherever we see it and from whoever espouses it.”

This comes amid an ongoing dispute over alleged racist attitudes within the Labour Party, after MP Hugh Gaffney was forced to apologise last month for offensive comments about the Chinese and LGBT communities made at a Burns supper. South Lanarkshire Labour councillor Davie McLachlan was suspended by the party in January amid an investigation into a racist mark which he allegedly made towards Scottish Labour MP Anas Sarwar.

READ MORE: Omar Afzal: Why Scottish attitudes towards Muslims are not as progressive as the country often thinks

Yousaf said that he has written to Richard Leonard demanding “serious and credible action”, including ensuring that the councillor is “permanently expelled” if he is found guilty, which the SNP MP said he is “certain he is”.

He said: “It is beginning to look like Richard Leonard has one rule for his pals and another for everyone else as the racist incidents plaguing Scottish Labour continue to unfold.

“The Scottish Labour party have refused to admit whether or not Hugh Gaffney had already undergone diversity training before his racist outburst, which makes a mockery of this so-called punishment.

“Richard Leonard has recently said he has zero tolerance for Islamophobia, now is the time for deeds not words.”

A Scottish Labour spokesman said: “James Dempster has been suspended pending an investigation by the Scottish Labour Party. The party has a zero tolerance policy towards racism.”

Dempster told BBC Scotland that will undergo diversity training, and in a written apology to Yousaf he has said that he takes “full responsibility”, while stressing that the remarks were “not representative” of who he is.

He said: “I am fully aware of the hurt and offence that my words will have caused you. My ignorance is totally inexcusable.

“Please accept my sincere apology, as I reflect on the impact of my conduct, and what I need to personally address.”

“Right to call this out & challenge it, no matter who or where it is from. Everyday racism and Islamophobia is real. Our society & institutions are not immune to it. Lots of work to do.”

Sarwar has been highlighting the issue of racism in politics and wider society since revealing the comments made by Davie McLachlan in January, and speaking out on his experience of racism and Islamophobia during his leadership campaign last year. The MP has published an eight-point plan on how the Labour party can address the issue.