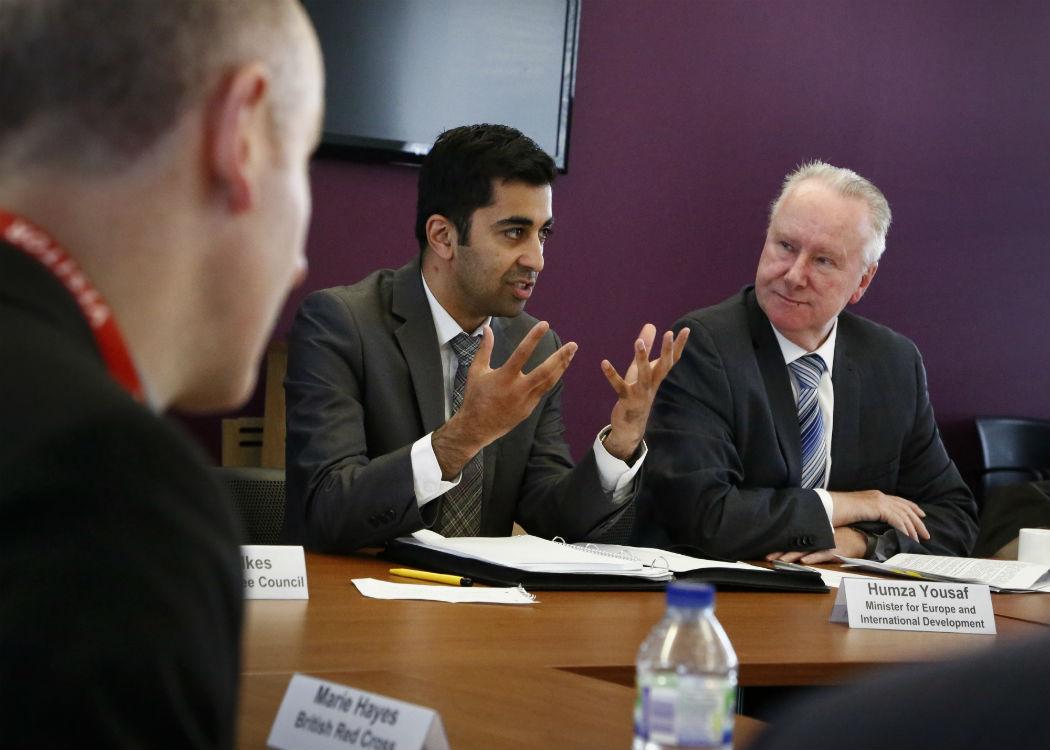 THE SCOTTISH GOVERNMENT’s Minister for Europe has said that an “overwhelming” In vote by Scots could “tip the balance” and keep the UK in the EU.

Humza Yousaf, who is heading up the SNP’s In campaign, told CommonSpace that he was confident of an In vote in Scotland, but that achieving it would mean the SNP presenting its own case for remaining in the 28 member block, separate from the “miserable” campaign being waged by other parties.

He said: “I knock enough doors to know there is a lot of scepticism, a lot of undecideds. So we aren’t complacent, but we are hopeful of an overwhelming In vote.”

“The SNP will be leading Scotland’s campaign to remain within the EU.” Humza Yousaf

“Scottish votes could tip the balance and keep the UK in the EU.”

Yousaf made the comments with reference to a scenario cited by First Minister Nicola Sturgeon, whereby a second independence referendum could be triggered under circumstances where the UK voted to leave and Scots voted to stay. Yousaf said that an alternative circumstance where Scotland kept the rest of the UK within the EU would also raise constitutional questions.

Arguing that the SNP should focus on its own separate campaign, he said: “We dominate the political landscape in Scotland so there really isn’t much benefit in standing with other parties, particularly those like the Conservatives with whom we have real ideological differences.”

“The SNP will be leading Scotland’s campaign to remain within the EU.”

The SNP’s determination to focus on its own party campaign will contribute to the fractious nature of the In campaign, which is now made up of several party fronts including ‘Labour In’ and the Liberal Democrat ‘Keep Britain in Europe’ campaign. The UK Government has so far largely ignored the official ‘Britain Stronger in Europe’ cross-party group in order to campaign for an In vote on its own behalf.

The Out campaign is split into several competing but cross-party groups.

Yousaf’s comments come after Sturgeon called for an overwhelming vote for In across the UK .

Yousaf also argued that the campaign to keep the UK in the EU was being endangered by the “miserable” campaign being waged by other parties, and that the In campaign couldn’t afford the loss of support suffered by Better Together campaign during the Scottish independence referendum.

He said: “The other parties have descended into a miserable, negative, fear-mongering campaign.”

Answering criticism from Jim Sillars, the former deputy leader of the SNP who has called for an Out vote to secure Scotland’s sovereignty, Yousaf said that he couldn’t guarantee that “all 115,000 SNP members want to remain” and added that the SNP In campaign “will have to target SNP supporters as well”.

Yousaf said that he wanted reform within EU to make it more progressive, but admitted that “these things don’t come easy in Europe” and that those committed to changing the EU would have to “play the long game”.

The UK’s In/Out referendum on membership of the EU will take place on 23 June.