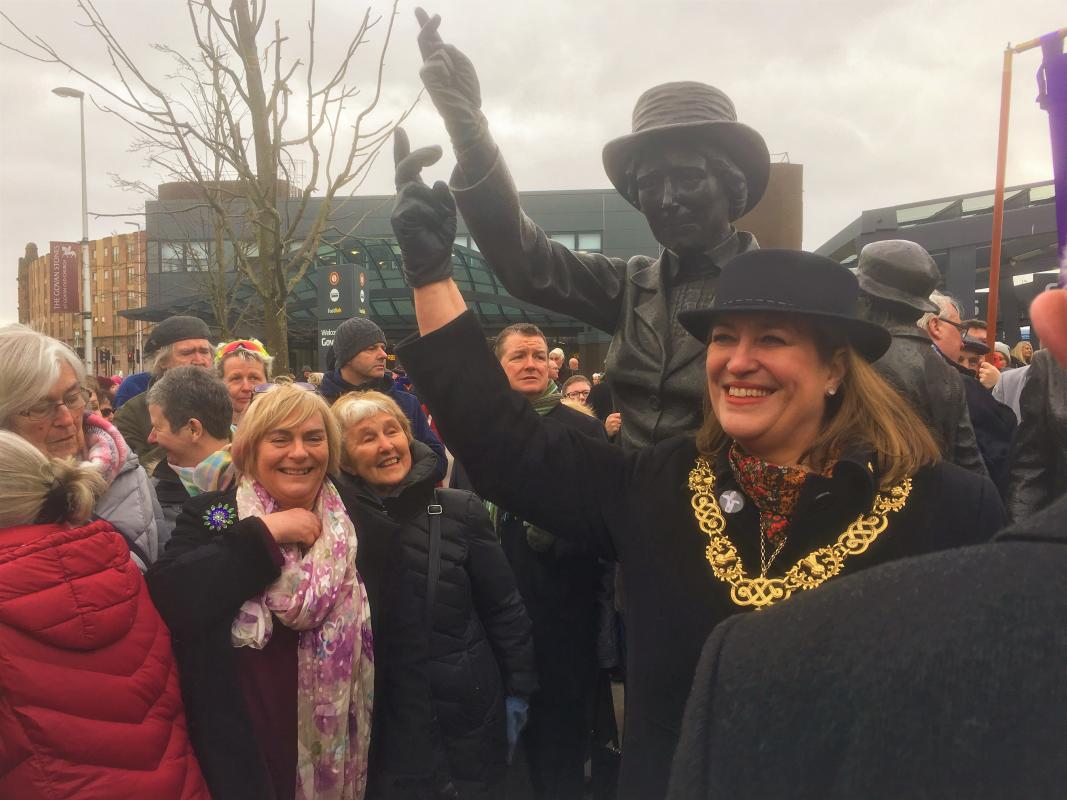 RENT STRIKES LEGEND Mary Barbour was memorialised in Govan on Thursday (8 March) morning as a statue celebrating her role in history was unveiled after years of fundraising, leading to calls for school history lessons to include more about the role of women in history.

Although infamous for leading thousands of women in Govan on rent strike, Mary Barbour was, as well as being the first woman councillor in Glasgow, a formidable campaigner on a range of issues including workers’ rights and the availability of birth control.

The cost of the statue was raised entirely by a fundraising appeal coordinated by the Remember Mary Barbour Association (RMBA). People and organisations across Scotland donated to the appeal, but speaking at the unveiling the group’s treasurer said the people of Govan supported the project in a “big way”.

Hundreds of school children marched into the square where the statue is located holding placards replicating slogans used during the rent strikes, and speakers at the event said that as well as the statue the greater legacy for Barbour would be children in Govan today knowing her history.

Scottish Government minister and local MSP for the area Humza Yousaf said he had never been prouder of the area, and added that the fight Mary Barbour took up continued today. He said: “Mary Barbour was the personification of what a politician should be, she gave a voice to the voiceless.

“The Scottish Government has ambitious targets for social and affordable housing, but looking at the Tory government’s bedroom tax we can see that fight Mary Barbour began still continues today.”

Speakers at the event said it was no coincidence that the statue was being unveiled on International Women’s Day. Maria Fyfe, a former MP who has been a key member of the Remember Mary Barbour Association (RMBA) who secured the funds for the statue, said: “She was the woman who led many thousands of women to victory against greedy landlords.”

Also at the event was former Scottish Labour leader Johann Lamont. A former history teacher herself, Lamont said that the history of Mary Barbour should be taught in schools today: “We already talk about the events that shaped Scotland today, but history lessons still don’t talk about women’s lives.

Placards at the unveiling today from “Mrs Barbour’s Army” and singing from the Glasgow All Sorts choir pic.twitter.com/dFhHOPHckY

“Even when we talk the trade union movement, we still don’t talk about women.

“Mary Barbour is a classic example of who we should be talking about when we discuss the history of Glasgow, Scotland and the trade union movement.

“We should be talking about the communities like Govan which have always been held together, in a large part, by women.”

The statue, unveiled by local school children, was designed by sculptor Andrew Brown who told CommonSpace that his design was inspired by the idea of Mary Barbour’s Army: “Rather than sculpting her on her own, I wanted her to be with her army – so the statue feels connected to the people of the community.

“It is no longer my statue but the people of Govan’s, and I hope it inspires future Mary Barbours .” Sculptor Andrew Brown

Speaking to CommonSpace after the launch, Eva Bolander said Mary Barbour was a role model for the people of Glasgow and that on International Women’s Day Barbour’s legacy as a feminist showed the need for men and women to fight misogyny.

Bolander also supported calls for the history curriculum to be expanded to include women like Mary Barbour: “Our curriculum should promote the many fantastic women who have been suppressed throughout history, not just one token woman like Mary Barbour but the many others such as the woman who discovered the DNA helix but was for a time written out of history.”