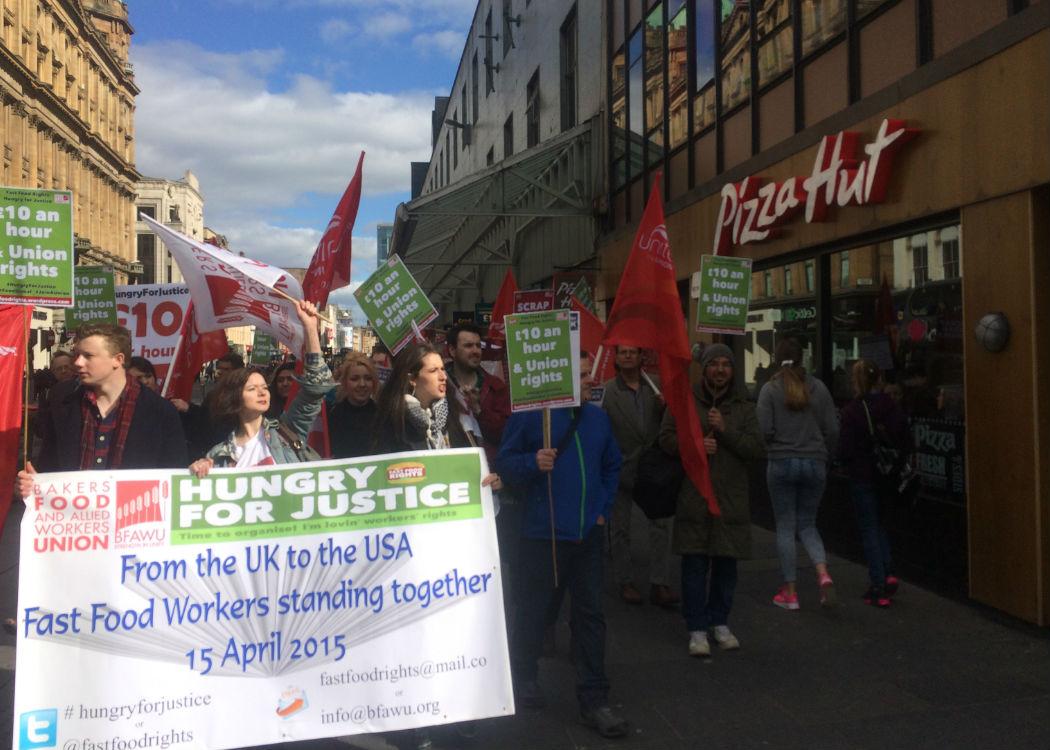 The Fast Food Rights campaign assembled at four different McDonalds’ restaurants in the city to demand an end to zero-hour contracts and an increase in the minimum wage to PS10.

Similar actions took place at towns and cities across the UK.

The day of action was organised in solidarity with fast food workers in the United States who have been involved in a series of strikes to demand higher wages and better working conditions.

The protesters marched through the city centre of Glasgow chanting slogans such as “the workers have the power, ten pounds an hour” and “McDonalds, McDonalds hear us say, we will strike for higher pay”.

Jamie Max Caldwell, Unite Community organiser told CommonSpace that his union had decided to support the global day of action after speaking to fast food workers in the US.

“At the Unite youth conference we spoke to fast food workers in New York decided we were going to support this day of action.” he said. “It’s very important as there’s a similar situation in this country with folk on zero-hour contracts.

“Today is global day of action. It’s not just in America, even though America is at the forefront of it, taking strikes. The good thing about what’s happening in America is that it’s making people in this country stand up. We need to instill dignity at work.”

Caldwell said that proposals to ban ‘exploitative’ zero-hour contracts should be extended.

Mark McHugh from the Bakers, Food & Allied Workers Union said the campaign is an example of international solidarity.

“It’s a global campaign for fast food rights,” he said. “It’s being going in the US for a number of years so we’re catching up with it. This is the fourth of fifth day of action we’ve had in Glasgow.

“We’re working in conjunction with our brothers and sisters in the States and trying to get pockets of activity where we can to start organising ourselves. We started a fast food branch where people from the industry can join and it allows us to start working collectively.”

Meanwhile, Peter McColl, Scottish Green candidate for Edinburgh East said:”Fast food workers are among the most exploited in this economy. Despite making colossal profits for their corporate employers, fast food workers are expected to suffer unpredictable work at poverty wages while being treated as disposable and denied any say in their working conditions.”