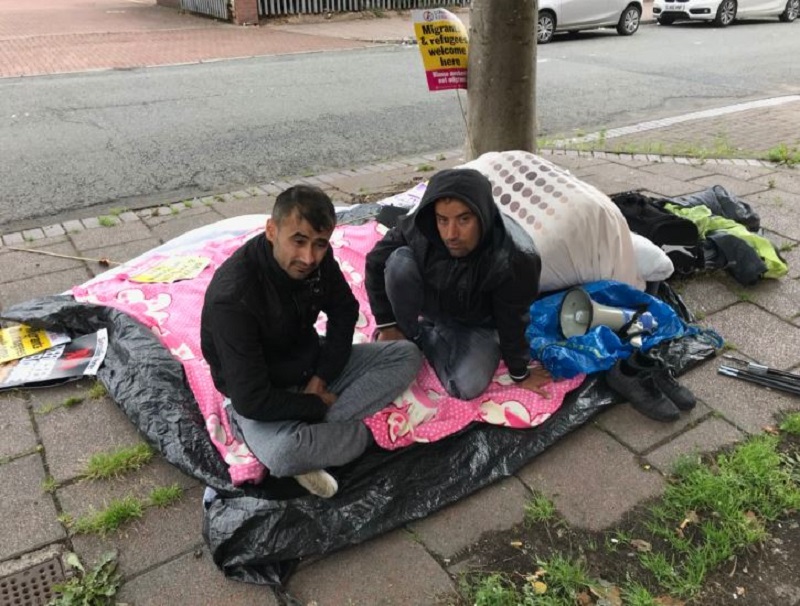 CommonSpace speaks to Rahman Shah, one of the 300 asylum seekers at risk of eviction by government contractor Serco

EVERY DAY in interviews across the globe, journalists start out by recording the most basic details about the person they are speaking to, but for Glasgow asylum seeker Rahman Shah, the basic questions are the most difficult to answer.

Shah doesn’t find the questions difficult to answer because of his English; he’s fluent. The questions are difficult because he does not have the answers, he does not know where he is from and he has not been able to find a country which will allow him to make a home.

Arriving in the UK seeking refuge from Afghanistan, Shah immediately sought help and safety at a police station, but that safety has been constantly out of his reach ever since his arrival as he has battled a complex, hostile system of asylum which seems weighted against him ever being a citizen, of anywhere. Perhaps it ws designed that way, after all the Prime Minister specifically lambasted those who are a “citizen of nowhere”.

Home Office interrogators who decide who the UK will protect have time again demanded information that Shah, who is 32,  is simply unable to provide them.

Shah is one of the 300 asylum seekers in Glasgow who face being locked out of their government provided accommodation in the coming weeks after private contractor Serco announced it would change the locks.

Officially born in an Afghan camp, mysteriously named “Camp 16”, Shah’s parents had themselves fled crisis in Pakistan. Because of the decades-long crisis in Afghanistan, his parents never made the trip to a registry office like thousands of Scottish parents do, and his life was never recorded and neatly filed away for future reference.

Shah explains that no country in the world recognises him as a citizen, and he says this one fact is what has defined his entire existence and forced him to feel segregated from the rest of the world.

Despite a UN group estimating 3,438 civilians were killed and 7,015 were wounded in Afghanistan in 2017, and the UK recognising the country as the “second least peaceful” in the world after Syria, the Home Office rejected 75 per cent of claims for asylum from applicants who fled the country and regularly deports people back.

The UK’s approach to Afghan refugees and asylum seekers has been condemned as reckless by the human rights watchdog Amnesty International, and other refugee rights campaigners have warned that the UK could be putting lives in danger.

Asylum seekers like Shah are provided with an ID card by the government, the only official document which Shah has ever held which bears his name. It affords him no rights, not even the ability to open a bank account, evidenced by the fact his wallet is completely bare but for the government card.

Shah today [1 August] began a hunger strike with his friend Mirwaiz who faces a similar situation, the two asylum seekers, who are being supported by local refugee rights campaigners, are camping outside the Home Office building in Glasgow.

Speaking to CommonSpace before his protest began, Shah explained that all he wanted was for UK authorities to treat him as a human and recognise his plight, but insisted that Glasgow and its people had welcomed him with open arms.

“The people of Glasgow are so nice, you know that walking the street they are all so friendly.

“All I want is a human right, I only want the UK to help me find safety because I have nothing. No money, no food, no passport.

The Home Office refused Shah asylum, insisting that he is entitled to Pakistani citizenship, but authorities there have consistently refused to recognise him.

Scottish Green councillor Kim Long is supporting Shah and Mirwaiz, and told CommonSpace that cases similar to theirs could be found across the city: “Mirwaiz and Rahman have endured years of limbo, waiting for decisions from the incompetent Home Office. Suddenly there is urgency, but it’s to push them onto the streets even though they are still pursuing their legal cases.

“You cannot fight for survival and a fair hearing at the same time. Mirwaiz and Rahman must not be locked out of accessing justice.”

CommonSpace understands that Shah and Mirwaiz are preparing their legal bid, if the Scottish courts think they have grounds for an appeal then a judge will review the Home Office decision, and could potentially overrule the government on human rights grounds.

Despite both men challenging the UK Government in court, Serco may still be able to evict them as they are categorised as “failed asylum seekers.”

Glasgow politicians from the SNP, Labour and the Scottish Greens have all made radical calls to take direct action to protect people like Shah, suggesting that they will lead protests outside the houses of those under threat in a bid to stop the eviction.

Rahman and Mirwaiz will be camped outside the Home Office building on Brand Street, Glasgow.