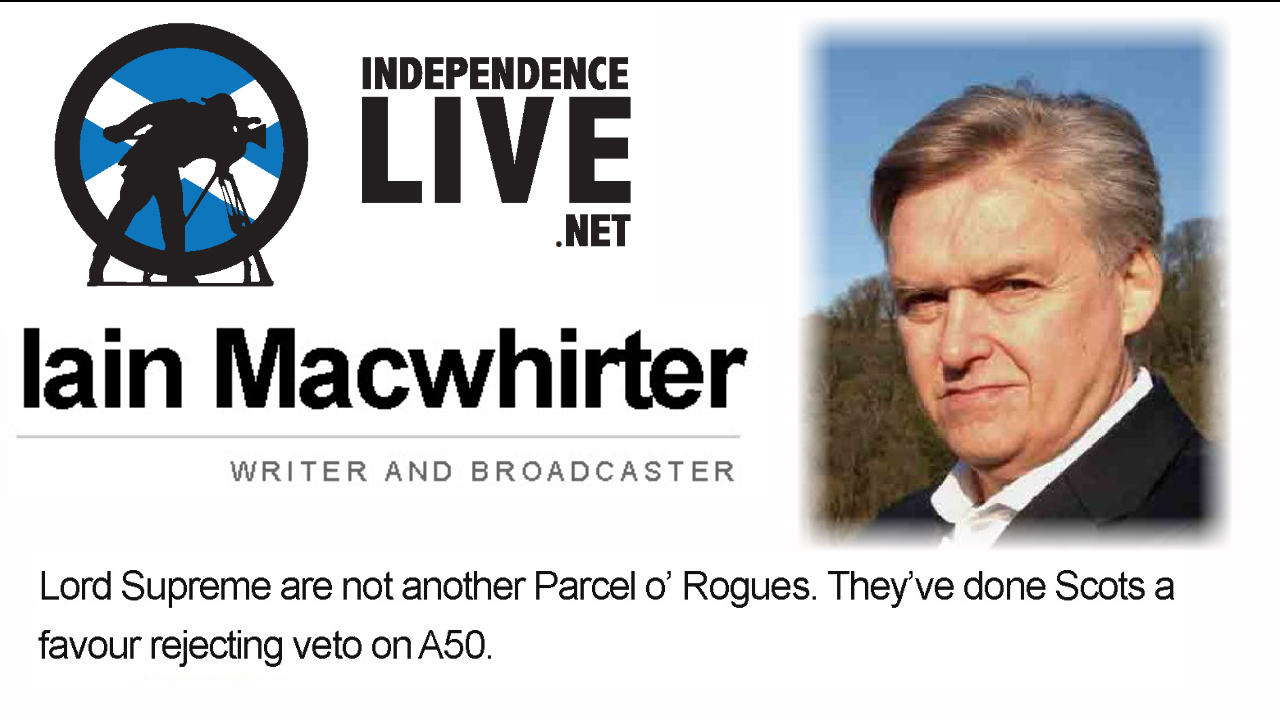 Mike, from IndependenceLive.net, recently talked to well known Scottish journalist and broadcaster Iain Macwhirter about his recent article on the Lord’s ruling of a possible Scottish veto of Westminster’s Brexit process and the triggering of Article 50.

Macwhirter explaines that the 2016 Scotland Act has not enshrined the sovereignty of the Scottish Parliament over its devolved areas of governance, as many people thought it had.

Macwhirter also makes some interesting and unnerving points about the implication of the Lord’s ruling regarding the U.K.’s Brexit process and Westminster’s relationship with Trump’s USA.

Below is the excerpt from Macwhirter’s article referenced in the video.

“Scotland should thank their Lordships for making crystal clear what many suspected: namely that the Sewel Convention … is codswallop. It has no legal force. The clause in the 2016 Scotland Act, which supposedly placed Sewel on a “statutory footing”, was just there to fool the natives. … Holyrood’s legislative powers are clearly and explicitly on loan from Westminster and liable to be over-ridden as and when the UK Government chooses.”

Macwhirter’s full article can be read for free here: Lords Supreme are not another Parcel o’ Rogues. They’ve done Scots a favour rejecting veto on A50: https://iainmacwhirter.wordpress.com/2017/01/28/lord-supreme-are-not-another-parcel-o-rogues-theyve-done-scots-a-favour-rejecting-veto-on-a50/

The Sewel Convention and the 2016 Scotland Act

“The lords and the supreme court were investigating a specific question about the Article 50 and whether or not Parliament had to give its assent before the motion could be put through that triggers our Brexit from the European Union. But they were also asked to consider whether or not there should be a legislative consent motion from the Scottish Parliament, in other words, should Holyrood also have to give its say? And they said no, there’s no grounds for that veto at all. Now initially a lot of people felt a bit like, well, here’s another parcel of rogues. You know they’re trying to diminish the status of our Parliament, you know, they’re giving us a bit of a rough deal. But I think they actually did us a favour because they made it explicit, what a lot of people have realised and suspected before now – that the whole Sewel Convention, under which Westminster supposedly does not legislate on areas of competence of the Scottish Parliament, without the Parliament’s express agreement in a legislative consent motion – that, that Sewel Convention is basically window dressing.

“Now, it’s called a convention. But conventions are quite important. I mean, there are lots of conventions. The fact that every Act of Parliament is signed off by the Queen, that’s a convention. These conventions are not just a mere form of words. And more over, the Sewel Convention was supposedly placed on a statutory basis by the 2016 Scotland Act. This was part of the Vow. Part of the deal, after the referendum was that the Scottish Parliament’s powers would be entrenched and that the Sewel Convention would no longer be just any old convention, but would be placed on a statutory footing, and many people thought that meant that it was now a legal obligation – that Holyrood had to give its assent whenever its powers were taken away or added to. Clearly that’s not the case.

“Much was made of this before the Scotland Act was passed. In the debates on the Scotland Act we were all told that this meant that the Scottish Parliament was entrenched, it had a solid constitutional foundation. In other words, that in its own areas of competence – which of course are quite limited – but in its own areas of competence – health, environment, education, criminal justice and all the rest of it – it basically exercised sovereignty. That this was more like a federal constitution, where the states’ governments – if you like, regional government – has its own constitutionally enshrined right to legislate on these specific areas and these rights could not be taken away. And that’s what people felt, or were lead to believe, was what putting Sewel on a statutory footing meant. Clearly it did not.”

“It is clear that the Brexit process hasn’t just meant that the U.K. is leaving the European Union. It means that there is going to be a new [U.K.] Union afterwards and it is going to be much more of an incorporating Union. A much tighter controlled Union and a much more centralised Union.

“I think before the whole Brexit process began there was a sense, even among many in Westminster, that the U.K. was moving towards a kind of federal constitution, where there would be a division of powers. The Scottish Parliament, on domestic legislation at least, would be its own boss. It would decide what the laws were to be in Scotland about these areas, these domestic areas – you know, education, as I said, the law, criminal justice, the environment etc. And that the border issues, maybe like currency, defence and foreign affairs, would be managed on a U.K. basis. And there are plenty of models for that obviously. You have in America and Canada, states like Quebec which have extraordinary latitude. States in America like Oregon which legalised cannabis, which has the power to set its own statutory minimum wage. These are very significant powers.

“So there was a feeling that this was kind of where we were moving. That almost by default Briton would become a federal entity. And I think that really the Brexit process has exposed that, clearly that is not the case. And the test of this was really the Sewel Convention – whether or not the Scottish Parliament now had a right to exercise sovereignty in the areas of its own responsibility? You can’t have two ways about this. Clearly it does not. Now this doesn’t mean that Holyrood is useless. It can still pass lots of laws. But it will always be under the understanding that these [new laws] are explicitly endorsed by Westminster, and they can be taken away whenever necessary. And that will be important coming down the Brexit road when we get to the Great Repeal Act, Great Repeal Bill, which will supposedly repatriate all the laws that are currently exercised by Brussels – agriculture and fisheries and what have you. [Control over these laws] will go to Westminster initially. There is a suggestion that Scotland will get more powers as a result of this process, but, if it does – and I doubt it very much – they will on the basis of this provisional nature. That so long as they accord with Westminster’s view of things, then the Scottish Parliament will be allowed to exercise its power. As soon as there is a constitutional issues, a constitutional confrontation it will be asserted that the U.K. has the over ridding authority.”

“Well, it looks like decision time, doesn’t it really! I think…it’s unfortunate because we’ve just had this referendum. Not many people really want another referendum so soon. We’ve had two referendums in the last couple of years and some quite energising and stressful general elections as well. But it is beginning to look as if this decision has to be taken before the U.K. leaves the European Union.

“If Scotland is going to retain the protections of European citizenship – remember everyone in Scotland is currently a citizen of the E.U. – that confers all sorts of rights: the right to free movement across Europe; the right not to be discriminated against on grounds of your race and nationality; the right to apply for any job anywhere in Europe; the right of residency in Europe. These are really quite important rights and Brussesl has been the backstop, the guardian, of the protections that we enjoy here. Now that is going to be taken away after Brexit. It is going to be a different union after Brexit. It is going to be very difficult for Scotland thereafter to leave the U.K. and then rejoin [the E.U.]. It’s not impossible – nothing is impossible, down the road in ten or twenty years time that may well be what happens – but certainly, to be on the safe side, if Scotland wants to stay in [the E.U.] and retain the benefits of European citizenship, then Scotland has to be at least down the track for independence before Brexit, because that is the only circumstance under which the E.U. will be able to say: “right, Scotland is staying in the E.U.”, while Britain leaves it.

“More than that, what we’ve also seen, distressingly, with the kowtowing, the obsequious attitude towards the new president of the United States is that it won’t just be Brexit U.K. that we’ll be in. It will be Trump U.K. because we’re so desperate to strike some kind of trade deal, for whatever reason – it seems like a mystery why you would give up a perfectly good free trade deal with Europe, to go and try and have one with America, but that’s what they intend to do. The kind of concessions that are going to be made to Donald Trump in the process, I think, most people here will find profoundly distasteful and have all sorts of implications for the standards and integrity of the National Health Service, Health and Safety, agriculture, GM crops, fracking, you name it, it is all going to be down there, and I think that is going to make people think very carefully whether or not they want to continue down the road of a U.K. which is basically under the tutelage of Donald Trump.”