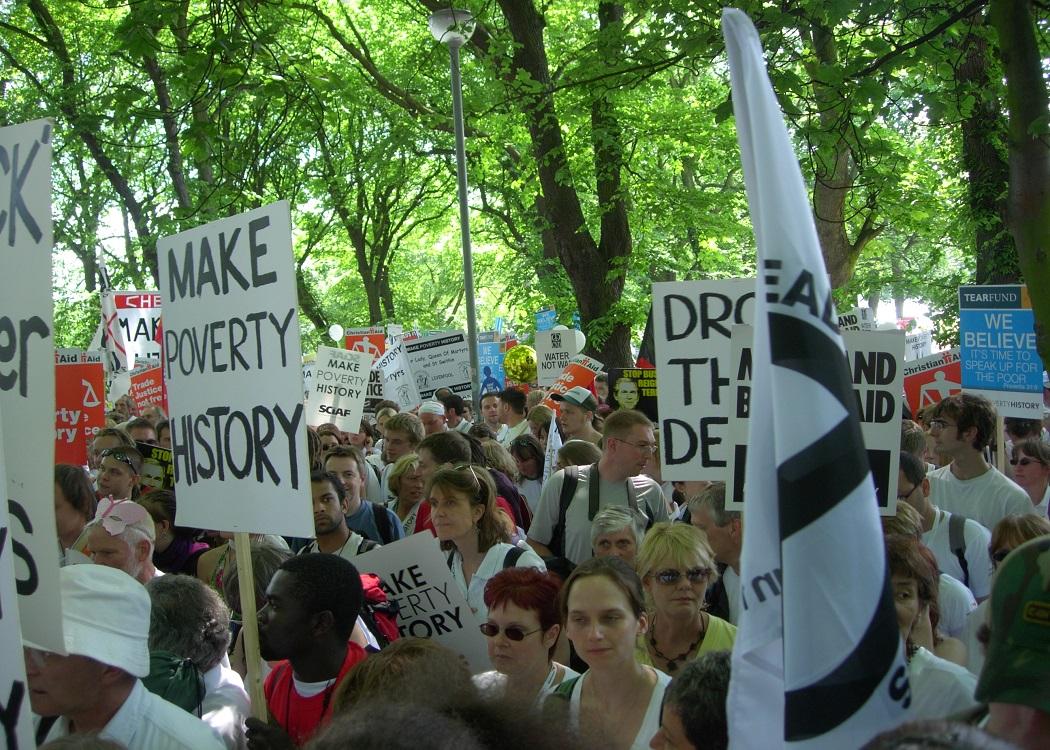 Ten years on from Make Poverty History, Commonspace columnist Ian Dunn suggests it provides a template for forcing the most powerful governments on earth to change their ways

TODAY marks a decade since the largest demonstration in Scottish history. It was also one of the most successful in global history.

The Make Poverty History march brought a quarter of a million people onto the streets of Edinburgh on a warm and sunny Saturday afternoon. They were marching to pressure the leaders of the G8, meeting at Gleneagles the following month, to take steps to aid the poorest people on earth.

The principal demand was the huge, binding debts of countries in the developing world to be written off. In part due to the pressure of that campaign, the governments of the G8 agreed to write off a stonking 55 billion dollars in multilateral debt.

The Make Poverty History march brought a quarter of a million people onto the streets of Edinburgh on a warm and sunny Saturday afternoon.

Ten years on there has been marked progress in reducing the number of people in the most desperate poverty globally. According to the most recent World Bank estimates, in 2011 17 percent of people in the developing world lived at or below $1.25 a day, down from 43 percent in 1990.

Though progress is uneven, in every region of the world, even accounting for the financial crisis, fewer people are living in extreme poverty than was the case 20 years ago.

Yes, the causes of this improvement are many and complex. The growing middle classes in China and India, the sprinting spread of mobile phone technology allowing immediate transfer of funds across hundreds of miles and mostly, the efforts of the people in the world’s poorest countries to lift themselves out of relentless, grinding poverty.

But those marching in Edinburgh 10 years ago played their part. How much success would you have had encouraging your bank manager to write off a bad loan, simply because you lost your job and couldn’t afford to pay it back?

The consequences of that might be disastrous to you, your family and wider society, but there would be no sympathy. Yet thanks to a lengthy and potent campaign, topped by a huge and unignorable demonstration of public will, the governments of the G8 did something similar.

Ten years on there has been marked progress in reducing the number of people in the most desperate poverty globally.

Money that would have gone into debt repayments could be used to build roads, schools and hospitals all over the world.

At the time, I remember many were sneering and contemptuous about those who went on the Edinburgh march. Nowadays the wave of cynicism and condescension from social media would be gargantuan.

No, poverty was not made history in Edinburgh 10 years ago. Indeed, there’s an almost arrogance in naming a campaign that, but if you aim high, even in falling short you can achieve great things.

Progress does not happen in single magical moments but through a long, grinding slog. This was a victory, and it made a difference, improving the lives of millions born into desperate poverty.

Further, it stands as testament to that fact that the broader your campaign, the more you can achieve. Even though the aim of ‘multilateral debt relief’ is bloody esoteric, individuals and groups from all over Scotland signed up because they believed in the principles.

This was a victory, and it made a difference, improving the lives of millions born into desperate poverty.

Much credit has to go to the organisers, who did a remarkable job in bringing together charities, trade unions, churches and many, many more.

Yet they were responding to a desire among many in Scotland who seek fairness for all, in this country and beyond, and are willing to work for that goal.

That desire still exists. The only question those who seek a better, fairer world should be asking, is how to harness it.