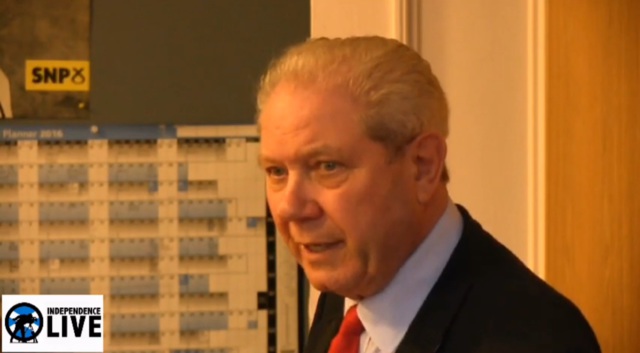 I BEGIN by confessing to an act of theft. I stole most of the words in the headline from an article Jim Sillars wrote for the Daily Record in November last year.

In mitigation, it isn’t total theft. I left some words behind and replaced them with a few of my own. Sillars’ headline was: ‘Why Nicola Sturgeon’s tongue is running ahead of her brain over Brexit.’

The article could have been written by Ruth Davidson or David Mundell or any other diehard unionist. He embraced the Tory argument that as Scots voted as part of the UK they have no voice of their own so no one should listen to the 62 per cent who voted to stay in the EU.

Why would someone who has spent more than 30 years campaigning to make Scotland an independent state turn against the movement at a time when the goal has never looked more attainable?

He repeated Boris Johnson’s wishful thinking that everyone in the EU will bend over backwards to strike a free trade deal with post-Brexit Britain because the British buy so many European goods.

He reminded Nicola Sturgeon that a lot of people who voted Yes in 2014 also voted Leave in 2016 and, as every loyal unionist does, brought up the trade estimates that suggest Scotland sells more to England than it does to the EU.

Like the unionists, he didn’t bother to point out that there is no official data on Anglo-Scottish trade and that the widely-quoted figures are based on questionnaires and conjecture. Every unionist likes to quote the figures from ‘Export Statistics Scotland’ but no one ever mentions they come with a warning that “Scottish estimates of exports to the rest of the UK should be treated with caution due to the difficulty in obtaining this information”. (It’s on page 19 of the latest report, on trade in 2015, if anyone wants to check.)

Sillars recently told listeners to Radio 4’s Analysis that he will not vote for Scottish independence if it means Scotland remaining in the EU. Younger readers might be surprised to learn that Sillars used to be a formidable politician and a respected figure in the SNP.

They might be even more surprised to learn that he was the prime mover of the independence-in-Europe policy that has been the party’s rallying cry since the late 1980s.

Sillars’ change of heart matters because he might not be alone in putting his hostility to the EU ahead of independence.

Older readers who remember him from these days will be wondering if his tongue has, in his words, run ahead of his brain. Why would someone who has spent more than 30 years campaigning to make Scotland an independent state turn against the movement at a time when the goal has never looked more attainable?

Sillars’ change of heart matters because he might not be alone in putting his hostility to the EU ahead of independence. According to press reports, 30 per cent of voters who supported independence in 2014 voted to leave the EU in 2016. So, too, did 400,000 SNP voters.

The existence of a sizeable number of Yes-Leavers gets mentioned frequently by people on both sides of the debate. Some supporters of independence seem to believe that the correct response would be to dilute or drop the issue of EU membership in the next referendum.

Leave aside for the moment questions about principle and the long-term benefits of European integration, the arithmetic in this proposal is ludicrous. No plebiscite can ever be won by a side that turns against 70 per cent of its supporters in order to accommodate the wishes of the other 30.

The logical response is to point out the folly of Sillars’ threat to abstain. The EU has many imperfections, which puts it on a par with every system of government in the world, but no one can deny it has more respect for its member states than Westminster shows to Scotland.

Take, for example, financial control. The EU is funded by the member states making a contribution to its budget. In the UK, the government in London takes money from taxpayers in Scotland and gives back what it deems appropriate.

If the EU wanted to make a constitutional change as momentous as Brexit, it would have to change the treaties, which requires the consent of every single member state. The contrast with the UK – where two out of the four constituent nations voted to Remain in the EU but are being ignored – is stark and dismal.

Sillars dismisses the EU as an “unelected undemocratic elite” and raises the old chestnut about it being dominated by Germany. As Europhobes do, he contrives to misrepresent the balance of power in the EU institutions.

In reality, no law could be passed without the approval of the heads of state and government who meet in the Council of Ministers (officially it’s called the Council of the European Union, but the old name rolls off the tongue more easily).

Members of an elite group they may be, but they are not “unelected.” To get into the Council each had to win a national election. The voting procedures in Council make it impossible for any one country to dominate. In a few sensitive areas, like tax, action is taken only if there is unanimous agreement.

The EU has many imperfections, which puts it on a par with every system of government in the world, but no one can deny it has more respect for its member states than Westminster shows to Scotland.

In most cases proposals must win a double majority – at least 16 of the 28 states have to approve and those in favour must represent at least 65 per cent of the EU population. (Anyone interested in the permutations of the voting system can explore them with the voting calculator on the Council’s website.)

Although members of the Council are all elected politicians, the English nationalists behind Brexit are disturbed that 27 of the 28 were elected by voters in other countries. From a Scottish perspective, however, all 28 won their mandate in another country, as the Conservatives govern Scotland with only one out of 59 seats and make no concession to the differences of political opinion between voters in England and Scotland.

The EU referendum brought those differences to the fore and Theresa May’s attitude to Scotland since then has been a mixture of arrogance, contempt and condescension. That really is a serious democratic deficit.

If Sillars was genuinely concerned about small countries being bullied by their neighbours he wouldn’t be willing to perpetuate the democratic absurdity of the UK.

England has 10 times the number of voters as Scotland (and Scotland has more than Northern Ireland and Wales combined). In a proper political union there would be some way to prevent the smaller nations being crushed by the big one. But politicians and voters in England would never tolerate any method of tallying the votes that sought to curb their numerical strength.

If Sillars was genuinely concerned about small countries being bullied by their neighbours he wouldn’t be willing to perpetuate the democratic absurdity of the UK.

Even apologists for the UK, like Professor Robert Hazell at University College London, admit that England’s dominance prevents the UK from ever being a genuine union. It will always be England with its Celtic territories in tow. That’s not an anti-English gripe, merely an arithmetical fact.

To hear Sillars say he would rather abstain then vote for independence in Europe sounded like sabotage.

The Yes-Leavers might dream of Scotland becoming a truly independent state, standing alone outside the EU, EFTA and maybe every other international organisation as well, but they are surely sensible enough to realise that a vote for independence in Europe would take them closer to their isolationist goal than staying in the UK.