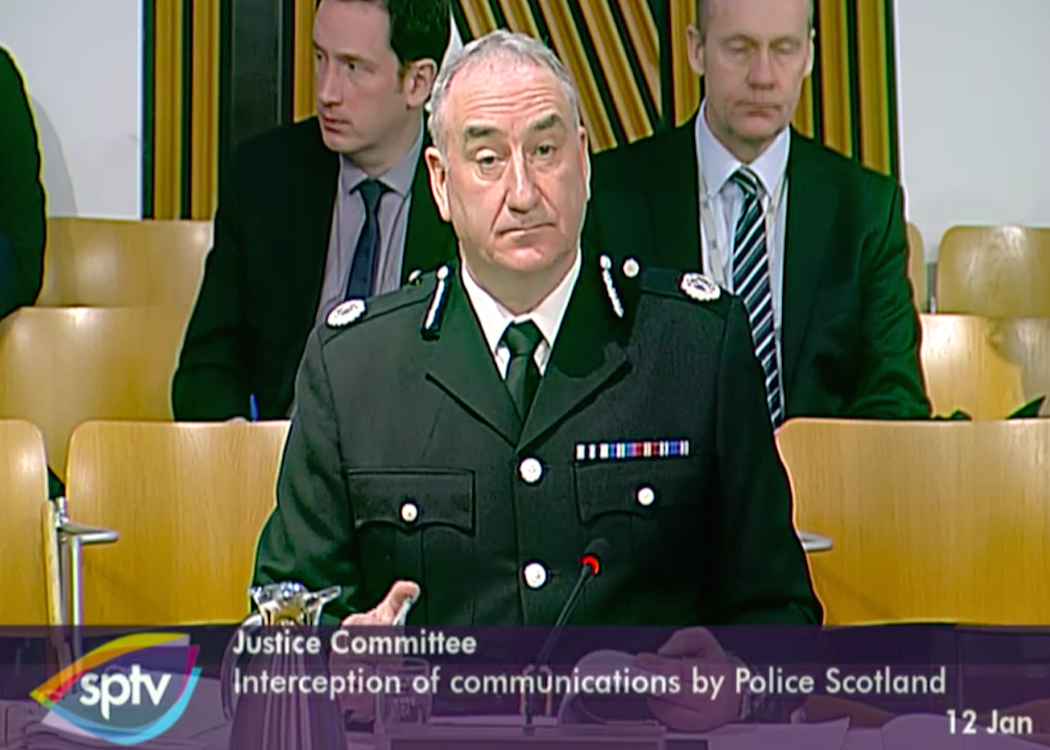 The justice committee, headed by SNP MSP Christine Grahame, is taking evidence on the police spying scandal, the details of which were revealed in November 2015 when the watchdog Interception of Communications Commissioner’s Office (IOCCO) named Police Scotland as one of the forces being investigated for “serious contraventions” relating to misuse of spying powers.

Following new rules requiring judicial authorisation before information on journalists could be sought by police officers in 2015, applications for communications interception of this kind continued to be made, as police officers attempted to find the source of a leak connected with an unsolved murder case .

Highlands & Islands MSP John Finnie responded: “So why are we here?”, to which Nicolson replied “I’d rather not be here; I’d rather we hadn’t breached the code, but unfortunately we have.”

He added: “Yes we got it wrong, yes we breached the code – but it can never happen again”.

The justice committee had asked the four key officers involved in the issue to come in for questioning – but Police Scotland refused the request, sending ACC Nicolson instead.

Nicolson was promoted to the post of assistant chief constable, with responsibilty for counter-terrorism and organised crime and a PS115,000 salary, in 2013.

During the hearing Nicolson repeated the statement, made in Dececmber 2015 by deputy chief constable Neil Richardson, that the senior officer responsible for authorising the interception had “misinterpreted” the new rules.

Nicolson stated that the four officers who the committee had requested could not attend on the grounds that they would face “personal risk”. Members of the committee, however, challenged these grounds and John Finnie MSP accused the force of “prevarication” over the issue.

Committee member Margaret Mitchell MSP confirmed to Commonspace that the convener would be issuing an invitation to the four individuals to give them the opportunity to come and give evidence in person.

Scottish Labour MSP Graeme Pearson said however that it was “inappropriate” for a committee to ask operational police officers to come to give evidence on their work issues when sensitive matters were involved and suggested the Scottish Police Authority “step into the void to ensure answers are obtained”.

Pearson, a former policeman, added that Police Scotland’s previous refusal to admit the breach of code was unreasonable. He said: “The force should have come forward right at the outset and admitted they’d been in breach of the legislation. A lot of the controversy would have been avoided.”

Niall McCluskey, an advocate specialising in policing, told Commonspace: “It is of grave concern that a senior officer attends a committee of that nature and the only explanation he can put forwards is that there’s been some misinterpretation of the legislation. It’s a very serious breach, to intercept the communications of a journalist.”

Communication between the committee and Police Scotland in recent weeks shows tensions building, with a letter from the force’s legal services in late December suggesting the committee was “acting beyond its powers” and turning down the request for four serving officers to give evidence.