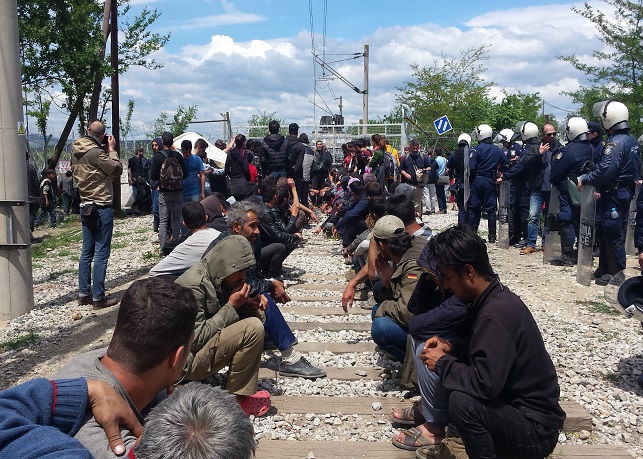 HUNDREDS of Greek riot police donned their gear once again on Wednesday morning after a largely peaceful day of clearances from the Idomeni refugee camp on Tuesday.

It had long been promised but more than three months after the first tents appeared, upwards of 45 busses have now left the infamous border settlement for official army camps since evacuation commenced on Tuesday morning. Estimates say over 2,000 people left voluntarily, and much more are expected to depart later today (Wednesday 25 May), with Greek officials claiming the camp will be gone within seven days.

Information from within the camp has been limited but all those who have been reached today have said that no major flashpoints have occurred as of yet. Many people inside, though, have expressed real concerns as to where they are going, with the information supplied by police seemingly insufficient to calm anxieties.

Read more: Horrors of Idomeni: How refugees are losing the will to live as Europe looks on

The Greek Government has labeled the new camps "hospitality centres", and while it is almost certain conditions will be better than they were in Idomeni, there is an understandable distrust towards military authority within the refugee population.
Whether it is the regime they have run from, or the Macedonian Army violently thwarting any attempts to pass, a positive experience with the military is hard to come by.

Just two weeks ago, a group of Pakistani men arrived at the Hara camp, situated a few kilometers from the border. It was 3am, and while late arrivals are not uncommon, the aid team that met them found the seven-man group beaten and bruised, suffering broken limbs and scarred faces.

Among the group was a 16 year old who was rushed to hospital with a broken arm, pictured below. 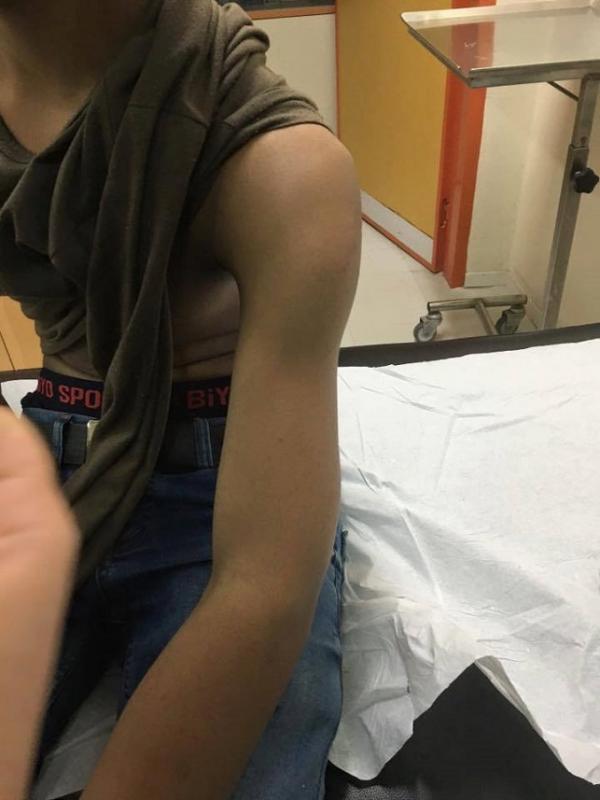 The men talked of beatings with iron bars and shots from rubber bullets, claiming they had also taken serious blows to the head. People speak of very similar experiences almost daily. Children as young as eight have returned from an attempt to make their way across the treacherous border paths with scars on their faces, mimicking the actions of the authorities who met them there.

Greek authorities have promised there will be no force used in the evacuation, but the latest moves suggest they are leaving the camp’s residents little choice. Aid access was reduced dramatically on Tuesday, with just 10 organisations now allowed into the camps.

Each group allowed access will now only be able to send a minimal number of fully documented members into the camp, with some reports suggesting that there will be a maximum of just 50 aid workers at one time for circa 6,000 remaining residents.

On Monday, as police prepared for the first stage of the eviction, ADM, a group providing food and other critical support to Idomeni, was denied access with over 4,000 meals prepared for the camp’s residents.

On Monday, as police prepared for the first stage of the eviction, ADM, a group providing food and other critical support to Idomeni, was denied access with over 4,000 meals prepared for the camp’s residents.

Even journalistic access has been restricted, with only Greek film crews being allowed to enter and actively document the clear out. Organisations such as the BBC were denied entry, and any volunteer or media member outwith the strictly reduced list will now be detained on sight.

The speed with which the operation has begun has meant there is a lack of information available to all parties involved. Unsubstantiated hearsay tends to be the main source of information, leading rumours of deportation and forced registration spreading like wildfire throughout the refugee population. The failings of the asylum application and information system have not helped ease these problems.

In the six weeks that Alland, a 42-year-old man from Damascus, has been trying to reach the asylum office, his seven-year-old son was admitted to hospital for respiratory problems, the camp he lives in was fenced off from the surrounding areas, and his wife gave birth to their fourth child, Ramman.

Ramman has spent the first three weeks of his life living just five meters from the main motorway to central Europe, with all the home comforts a tent provides. Despite the problems, his father always seems to be suppressing a grin. The newest addition to the family is healthy and growing at quite a rate, and there is no shortage of attention provided by the surrounding families he now calls neighbours and friends. 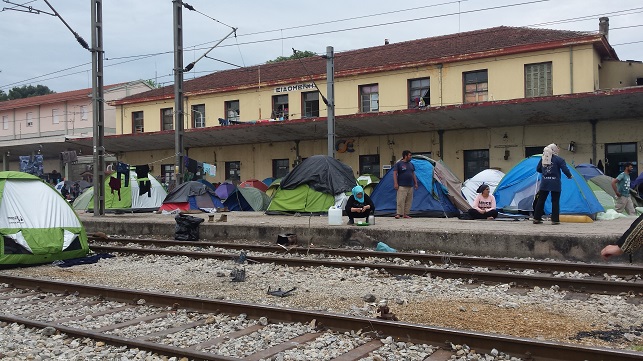 The fact is, though, that like so many others, the inadequate asylum system has let him down badly. For speakers of Arabic and Farsi, the two most commonly spoken languages, there is a time slot of only one hour a week to contact the official office through the Skype system. It is estimated there are currently over 50,000 refugees in Greece attempting to seek asylum in the EU.

Andy Cruickshank was in the Idomeni camp for over a month, volunteering with Scottish charity network Caring City, which has bases in Glasgow and Dundee. The 25 year old described the Skype system as one of the most frustrating aspects of his time there.

"I have talked to so many families that have tried the Skype service on the allocated time slot they have been given and every time they have been met with failure," he said.

"It simply doesn't work at all, the meetings have to be done in person. It is a complete joke."

A petition to change the system was started by a Rania Ali, a 20-year-old refugee from Raqqa in Syria, now living in the Idomeni camp. In a matter of weeks the petition garnered well over 190,000 signatures, but despite this, there has been no overhaul of the restricted application process which has failed so many.

"For people living in camps with limited access to electricity, smart phones, computers, or internet, this is a cruel and senseless procedure. If it is our right to claim Asylum, then why are there such impossible barriers to do so?" Rania Ali

"For us refugees here in Greece, our lives are reduced to a routine of sleeping and waiting. Waiting in line for food, to go to the bathroom, to charge our phones, and waiting on hold for a Skype call that is never picked up. Our lives are stuck in limbo," Ali said.

"For people living in camps with limited access to electricity, smart phones, computers, or internet, this is a cruel and senseless procedure. If it is our right to claim Asylum, then why are there such impossible barriers to do so?"

Like many other things, it is uncertain if a better process will be available once the new army-run camps are functional, but reports from camps already open suggest this is unlikely to be the case. 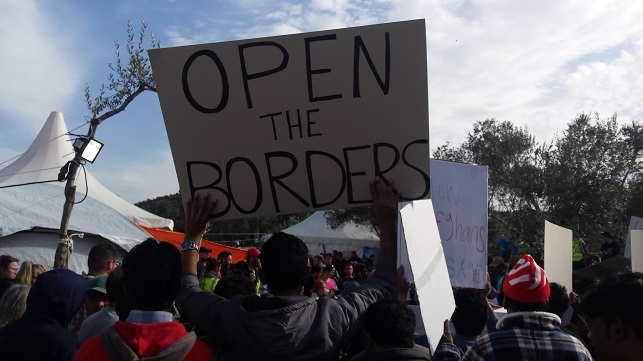 It has been widely agreed that the political pressure applied by the existence of the camp is one of the key factors driving the decision to evacuate, but aid groups and officials are still divided on whether the move will be beneficial for those caught up.

Including the surrounding camps there are well over 10,000 more people who will need to be moved before the area has been completely cleared. Right now, the message seems to be that it is unknown if the military camps are capable of holding this number people, never mind catering for their everyday humanitarian needs.

For those worrying for their family’s future right this minute, solid assurances from anyone seem to be the hardest thing to come by.