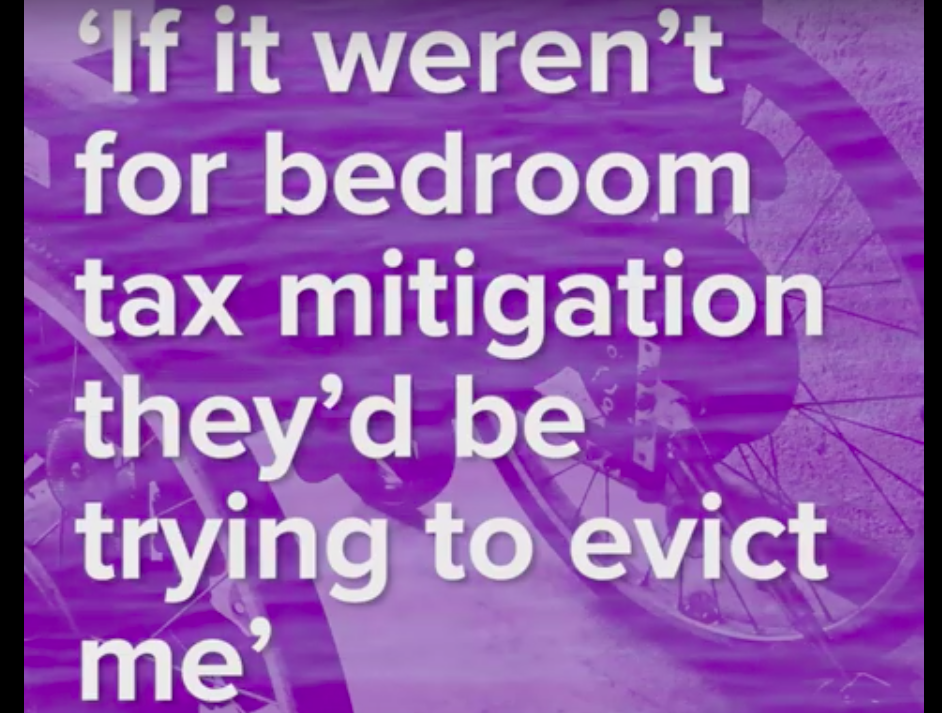 Three part series on one person’s journey through the benefits system, in their own words.

IN PART 3, Anne’s personal situation improves, but new rounds of welfare cuts still have her living in fear.

Part 3 – The Future: ‘If it weren’t for bedroom tax mitigation they’d be trying to evict me’

I have to say that ma experience has been that since 2012 [after] I had that assessment I was called to the Jobcentre to speak to a job coach, and I have to say that that man was a human being. He was very kind to me and apologetic, when I actually explained to him like you know I had worked for four years wi’ ma disability I had then lost ma job and ma health was then so much worse than it had been. He was really apologetic and I haven’t heard anything fae the Department of Work and Pensions since.

But I literally live in fear every morning – fae when I open ma eyes until the postie has been – of ‘the brown envelope’. Last week I got a brown envelope wi’ the “DWP” on it and I sat for what must have been half an hour and I opened it and it was ma p60 [laughs]. You know? ”Oh God this must be it”.

It’s that living in constant fear and then when the bedroom tax happened as well that was so frightening because the one thing I felt I thought was secure was ma house and that, you know, as long as I kept ma nose clean and kept sober and paid ma bills naebody could take that off me. And then when the bedroom tax came along that was such a scare because it threatened the very home you know. The one place of safety that I thought I still had was then under threat and I don’t know what would have happened if it hud’nae been for [the bedroom tax] being mitigated. Because I would have fought them tae the death.

I have to say that the Scottish Government in regards to the bedroom tax definitely, you know, have mitigated against the harshest of these benefit changes that affect people, me certainly. Because by now I would be in thousands and thousands of pounds of debt and they would be tryin’ tae evict me fae ma home. So I cannae imagine what that would’ve done, you know what I mean? To my head. So I’m really glad I live in Scotland [laugh].

READ MORE: ‘So why haven’t you killed yourself?’: One person’s journey through the benefits system Part 2 of 3

The fact that ESA remains in the hands of Westminster means that I am still gonnae be subjected to that assessment and I really do worry if they deem me fit for work. Because, you know, I desperately want to work, but I’ve admitted to myself, and ma health professionals are in complete agreement wi’ me, that I am in no way physically or mentally fit to work full time. I could mibbie go back to work a couple of days a week.

Our current benefit system is such that see the minute I admit to bein’ fit enough to work for an hour, I then become a new claim. Which means that I automatically lose £30 a week. Because ESA, now wi’ new claims, is on the same level as Job Seekers’, right? So if I said I was fit to work I would become a new claim, I’d go on Universal Credit, and automatically lose £30 a week. And then I’m open to aw of the horrors of Universal Credit. Which is, see fur me as a disabled woman, it’s like watching a car crash coming towards me. It’s just like the stories I’m hearing about it; there’s loads of people being evicted down south purely because somebody somewhere’s not ticked a box. And they’re losing their homes. I’ve jokingly said to the manager of my Housing Association: ”You do realise that if there’s any change to the benefits system I’ll be putting the barricades up and yer no getting’ ma hoose.” And she was like: “Oh we know that. We widnae even try.”

But aw jokin’ aside, that constant fear of losing ma home is, I think, keeping me unwell and keepin’ me unable tae cope, unable to move forward because I’m literally trapped. The thing is ma health is’nae perfect and so there’s every chance that even if I dae go back tae work fur a couple a’ hours a week it could be in a couple of weeks or a couple a’ months that, that I’m ill again. ‘Cause, wi a spinal injury it’s no just aboot a sore back. A spinal injury affects yer bowels, yer bladder, everything. The heavy duty pain medication that I’m on affects ma ability for deep thinking and ma memory is scary. Do you know what I done last night? I went in for a bath and left ma backdoor wide open. It’s stuff like that I can joke aboot it, see on a good day I can joke aboot it. I can joke aboot the night I went tae sleep and I left ma windae in ma spare room open so anybody could have just stepped into ma hoose. I mean it’s no the first time I’ve left the gas on. You know what I mean? In some circumstances I can look totally able bodied and I can be very good at coming across as being very articulate, but the truth is you don’t have to scratch much below the surface tae see actually that I’m … really quite ill and no really fit to be in any kind o’ job.

I just want the fear to stop eh? I mean I dae work. I dae loads a’ stuff. You know? And aw a’ that I see as my work related activity. [sobbing] You know? I dae aw this so that hopefully…I can mibbie help other people but it’s also to try and keep like ma brain goin’ so that if I dae get back tae work am know just this Tramadol, goldfish you know? Cause that’s the other thing tae eh. It’s like I’m prescribed, I’m supposed tae take like, like 400 milligrams of Tramadol a day. If you’re on that level of medication you’re a zombie. So, I keep ma medication at it’s absolute minimum and I only take 50 milligrams of tramadol a day. So it’s like I’m weighing up like the pain against the side effects of the pain medication. And so it’s a constant like juggling act to try and get the balance right and it’s like I over dae it aw the time and then I’m no well.

If they would just remove the fear and say: “Look we know that you’re no as clever as you used to be because yer on aw that medication right. But see if you go and work in, in an addiction office or y’know a local social work office for three days a week. Then we’re no goin’ to pay you any extra but we’ll stop terrorising you.” I would sign up right away. And I would try my very best to be there three days a week. See the thought of going back into that lion’s cage…

‘Cause that’s the other thing eh, [sobbing] I know loads of folk wi’ mental health problems who wur managing to hod doon part time jobs but once they introduced the sanctions I’ve got at least two friends who were like “Aw yer no working enough hours” and y’know aw the stuff aboot yer housing like if you know if yer on like a zero hours contract and you have to say “Well this week I worked twelve oors but I only worked ten oors last week” so their housing benefit was getting aw mixed up. And the system is actually makin’ people ill. So that they huv tae be on the benefit system and they cannae mentally cope wi’ tryin’ tae negotiate the in-work benefits ‘cause it’s a shambles.