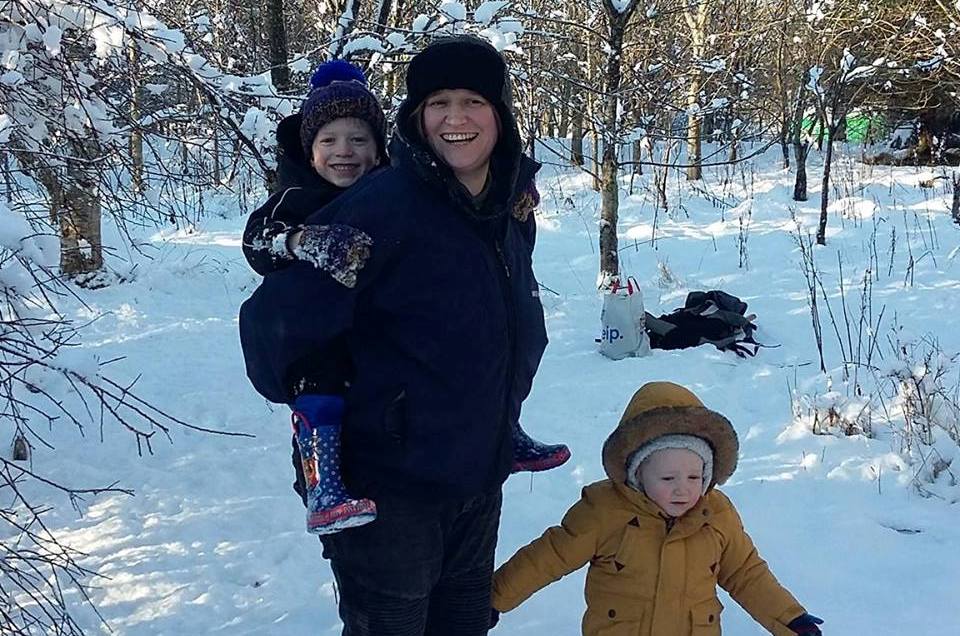 Ahead of ‘Spycops’ conference, Ellenor Hutson tells of how her environmental activism saw her mysteriously blacklisted from an industry she’d never worked in

“THE THING that sticks with me is that he was the person we wanted him to be. In our wildest dreams, he was who we’d want to attract to the movement.”

In 2005, Ellenor Hutson (pictured with her two children) met Mark Stone, an environmental activist with a compelling back-story and a commitment to the cause. Embedding himself in the activist community ahead of the G8 summit in Gleaneagles, Stone lived with a group of the activists and even had a relationship of several years with one of them, a friend of Hutson’s.

In October 2010, Stone’s true identity was uncovered by activists: Mark Kennedy was an undercover police officer for London Metropolitan who had infiltrated various protest groups using an alias over a seven-year period.

Hutson, who will speak about her experience at a conference on ‘Scotland, surveillance and Spycops’ this Saturday (23 June), says the revelation was “kind of mad”. Kennedy had an important role in the activists’ transport group, managing a fleet of buses and coordinating with other teams, and in many ways he was the ideal activist.

“He was practical, he was always available and he was more likeable than a lot of the other activists – he wasn’t falling out with anyone, because he was focussed on getting us to like him,” Hutson recalls.

“He had this whole back-story that he had been involved in crime and high level drug deals and he sort of saw the light and came to the environmental movement. It’s a ridiculous story but we wanted to believe that. He reeled us in with this romantic story.”

Hutson says the experience taught her “an important lesson”: “If you meet someone who’s too good to be true, they probably are.”

In fact, Hutson knew five people who turned out to be undercover police officers, but she feels she “got away fairly lightly” because, unlike some of the other activists, she never had a romantic relationship or emotional connection to them. Nevertheless, she says, “it can’t help make you a bit more cautious of people you meet”.

The potential impact of undercover policing on Hutson’s life was not made fully apparent until she received an unexpected letter from Unite in 2012 revealing she had been blacklisted from the construction industry – a sector she had never worked in.

“It was just good luck I was in a union and hadn’t let my membership lapse as I was on maternity leave, from a job totally unrelated to construction.

“I got a letter from Unite and I thought it was going to be a complimentary diary or something. It turned out they got a hold of this information and they were letting me know I was on the blacklist.

“The blacklist in construction has been an issue on the left for a long time, going back to the 1970s. It was always known you could be on it, but it came as a complete surprise to me.”

After looking into the issue, Hutson learned that the blacklist had been expanded to include environmental activists after a couple of high profile protests, and by setting up her own Facebook group she discovered she was far from alone in the experience.

Still, the activists were confused as to how they were identified for the blacklist. People working in the construction industry often had details passed on by their bosses, but it was clear that not all of the information on the list could have come about in this way.

At first, they wondered if it could have been the Brays Detective Agency, a private detective agency believed to be used by the government to spy on political activists, but this still didn’t seem to add up. And then, the eureka moment came.

The realisation was something of a vindication for Hutson: a confirmation of the links between “Special Branch and undercover police and the blacklist and corporate oppression” which many on the left had known were there for some time.

“The whole time I’ve been involved in left wing politics, it’s been known but it’s been slightly under the table. You can talk with close comrades but not other people as they’ll think you’re a bit mad,” Hutson laughs.

Now, she says, is the time for the truth to come out. “It’s important people understand how the state works,” she adds. This is why Hutson is calling for the inquiry into undercover policing which is underway in England and Wales to be extended to Scotland.

So far, both the UK and Scottish Governments have refused to make this happen, with justice minister Michael Matheson insisting there is not sufficient evidence to establish an inquiry north of the border.

Hutson, on the contrary, argues that the breadth and depth of undercover police operations in Scotland can’t be understood until it is properly investigated. “It’s certainly true the infiltrators I met were employed by the Met police, but we know these officers went to Scotland,” she says.

“We must realise Scottish institutions were involved in some way, and blacklisting affected a lot of people in Scotland.”

Asked whether undercover policing is always wrong, Hutson pauses. “I’m not sure you can say it’s always unacceptable but it certainly needs greater oversight,” she suggests.

“The unit was essentially a rogue unit left alone to do what they wanted, and it wasted a lot of public money spying on people like me who, despite allusions to contrary at the time, was an insignificant threat to the state.”

Even when those concerned are involved in criminal activity, Hutson says the impact of undercover techniques could be cruel and unnecessary. Recalling the story of a former undercover police officer whose role was to catch drug dealers and now opposes drug prohibition, Hutson says: “For him it was really vulnerable people, people with addiction, who were homeless, who experienced trauma as children.

“For some of them, he as an undercover police officer was the closest person in their life. Some people would say that’s not the same as infiltrating lefties – it’s criminals. But I would say it has a worse impact on them, to experience that and have no one to talk about it.”

All things considered, she says: “I think [undercover policing] is always wrong in the way it has been practiced.”

The government, Hutson argues, must too know that there are uncomfortable truths to face when it comes to undercover policing. “The reason you don’t want to have an inquiry is that you don’t want to know what the inquiry will find.”

The conference in Glasgow this weekend will hear from a number of victims of ‘Spycops’, including Andrea, a woman who had a long-term sexual relationship with the undercover officer Carlo Neri. Tickets remain available on Eventbrite.