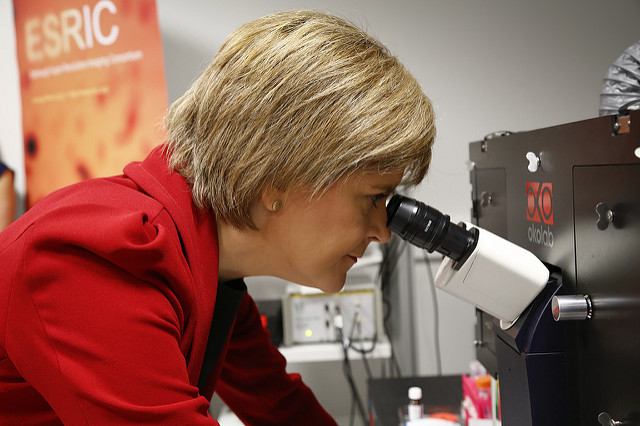 Sturgeon: “We may get into a situation where the UK government says ‘no, we’re not going to agree the Section 30 Order’, and I think if that happens we need to rise above that”

FIRST MINISTER and SNP leader Nicola Sturgeon has said that it may be necessary to seek another mandate for an independence referendum if the UK Government blocks a Section 30 order.

On Saturday [17 November] the First Minister addressed the Women for Independence’s AGM and answered questions on the way forward for independence.

The SNP leader said she would seek to avoid a Catalonia referendum situation where “the other side said it was illegal”.

She added: “The beauty of 2014 was that it was an agreed process.

“I don’t have an easy answer to this. We may get into a situation where the UK government says ‘no, we’re not going to agree the Section 30 Order’, and I think if that happens we need to rise above that, we need to make the case of how unreasonable that is.

“And ultimately if the only way through that is to take that to an election and ask the people of Scotland to use an election to say no, we will have absolutely our right to choose, I think that’s what that will take.”

At the 2016 May Scottish elections, the SNP secured a mandate for an independence referendum, where they stood on a ticket of holding a second indyref if Scotland was brought out of the EU “against its will”.

In June 2016, Scotland voted 62 per cent Remain, while the majority of the UK voted to exit the EU. In March 2017 Sturgeon announced that she was seeking a section 30 order from the UK Government to hold a referendum, and a motion was passed in the Scottish Parliament in April backing up her call.

The prime minister responded by saying “now is not the time” for an independence referendum, and after a snap General Election in June 2017, which saw the SNP perform worse than expected but maintain a majority of Westminster seats, Sturgeon announced that she was not going to push for an independence referendum until the terms of Brexit are clearer.

At First Minister’s Questions last week, Scottish Greens co-convenor Patrick Harvie pressed the First Minister on when she would be announcing her decision on whether to request a Section 30 order, after the publication of the UK-EU draft withdrawal agreement.

Sturgeon responded by saying she would set out her views on that “when we have clarity”, adding: “We have now seen the terms of the deal, it remains to be seen whether that makes it to the House of Commons over the next couple of weeks, and we will see how that sorry saga plays out.”

The National reported on Tuesday that the Scottish Government’s Constitutional Affairs spokesperson, Michael Russell MSP, had suggested that an independence referendum would happen if the House of Commons voted through May’s deal.

“If the unacceptable deal goes through – and I never predict these things – there will be substantial economic damage and then I’m happy to say we will have to say to the people of Scotland ‘make your choice’,” Russel said.

Meanwhile, a group of Westminster SNP MPs have backed a letter by their colleague Angus MacNeil, who has written to the Prime Minister asking for clarification on how Scotland can decide its constitutional future.

MacNeil announced on Twitter that Phillipa Whiford, Hannah Bardell, Lisa Cameron, Martyn Day, Carol Monaghan and Joanna Cherry had all supported his statement which said “now is the time to establish a mechanism to determine Scotland’s future, regardless of a referendum date”, and asked if May’s preferred mechanism was a Section 30 order or the SNP standing on an independence ticket at a General Election and winning a majority of Scottish MPs.

My letter to Theresa May.. Scotland will decide but useful to know her preference for independence- Referendum or General Election?#TimeUpTheresa pic.twitter.com/b7FHdWnf59

Rennie said: “Rather than admit this to her own side in secret, Nicola Sturgeon ought to stand up in Parliament and tell the whole country that independence is off the table.

“We’ve seen the damage caused by Brexit, we don’t need more chaos and uncertainty with independence.

“The public are tired of the SNP’s obsession with independence and their mishandling of health and education. Scottish Liberal Democrats will continue to demand better.”