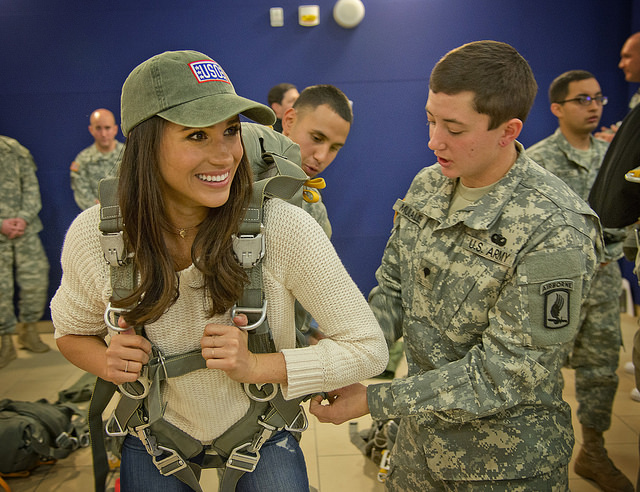 ANTI-RACIST and feminist campaigners in Scotland have criticised the view, conveyed in much media coverage of the issue, that the marriage of mixed-race American actress Meghan Markle to Prince Harry is a sign of progress on race equality, describing the framing of the wedding as “tokenism”.

With the royal wedding set to take place on Saturday 19 March, analysis of every angle and implication of the event has been abundant, not least the fact that this will be the first time that a BME (Black and Minority Ethnic) person will be represented in the British monarchy.

The Observer, for example, has written of public enthusiasm for the “more inclusive” wedding, and featured the view of historian Ted Powell, who said: “It is difficult to overstate how important it is to have a member of the royal family … who is mixed race and embracing her heritage and stating that is very much part of her.”

Connecting this to the current political context, he added that this was “hugely positive for Britain, particularly in the wake of Brexit, the controversies of immigration policy and the Windrush scandal”.

The Guardian suggested that black women “see the royal wedding as workplace inspiration”, speaking to black American women who felt that it might lead to increased confidence among black women in business.

READ MORE: #RoyalWedding: 5 ways the royal family are more powerful than any celebrity

However, BME women involved in anti-racist and feminist activism in Scotland told CommonSpace that this narrative naively masks the reality of historical and contemporary racism in the UK.

Suki Sangha, chair of the black workers’ committee for the Scottish Trades Union Council (STUC), said that while some might view Markle’s marriage into the royal family as “a step towards a more inclusive and diversity embracing Britain”, this will not address the reality of racism which is “deeply embedded within British institutions”.

“While predominately black families, mourning the loss of their loved ones and made destitute by the Grenfell Tower fire still await justice, millions of pounds are being wasted on a royal wedding.

“The suggestion that one mixed-race member of the royal family will help absolve Britain of its inhumane and racist immigration policies or the crimes that Britain has committed against the Windrush Generation is deeply insulting,” she said.

“The bunting, the flags, the nationalistic hysteria and the celebration of extreme wealth, won’t obscure the reality of inequality and racism.”

Sangha added that the monarchy is inextricably linked to Britain’s racist past and present. “The monarchy is probably one of the most potent symbols of privilege and nationalism in Britain.

“The idea that the marriage of Prince Harry – who once donned a swastika armband at a party – to a mixed-race wealthy actress, will in any way eradicate the royal family’s complicity in empire, colonialism and racism is quite frankly absurd,” she said.

Mélina Valdelièvre, an anti-racist activist who has campaigned for the removal of the Frederick Roberts monument in Kelvingrove Park due to its glorification of Britain’s colonial past, agreed that it was important to keep any positives in perspective given the royal family’s history.

READ MORE: Alastair Stewart: A very British fudge – why democratising the monarchy may be the best compromise

“We need to remember that one person alone is not going to eradicate racism in Britain and change a structurally racist and elitist institution – the monarchy of the British Empire. The monarchy is still just as likely to ignore its racist history and continue to reject the possibility of reparations – they are unlikely to give up their crown jewels and the Kohinoor,” she said.

“The monarchy is still unwilling to acknowledge its horrible past, let alone verbally apologise for it, whether Markle marries Prince Harry or not.”

However, Valdelièvre said she did feel the marriage could present “a step forward” in terms of representation. “Representation has a huge impact on individuals’ psyches in Britain. Young girls of colour will hopefully develop better self-esteem as they will have role models who look more like them and they won’t consider themselves ugly,” she said.

“Young people who grow up after the wedding will not be shocked because that’s all they will have known, normalising interracial marriages in powerful families, and the fact that Markle is a divorcee will hopefully also reduce the stigma of marrying again and marrying older.

“So it has a potential for challenging stereotypes and reducing racist and sexist prejudice.”

On the other hand, she said, the idealisation of Meghan Markle’s image could reinforce “colorism” as she “fits in perfectly with white Western standards of beauty”, and there is a risk of Markle being “tokenised”, a trend already apparent in some of the framing of the issue.

“She has become the trophy of diversity that royals and politicians can point at while hiding the shady racist measures and legislation being put in place,” she said. “Tokenism wrongly strips away Markle’s individuality – nobody will see past her racial identity and show more interest in her thoughts and ideas. In Britain, only white people have the privilege of not being racialised.”

READ MORE: ‘Stop fetishizing privilege and fawning over those who enjoy it’: Harvie submits Holyrood amendment to royal baby motion

Valdelièvre said she was also concerned that sexist and elitist ideals were being reinforced by the focus on the wedding as a triumph for Markle. “I think too much of the media attention is propagating the oppressive, fairy-tale narrative.

Tomiwa Folorunso, intern with the Young Women’s Movement (YWCA Scotland), echoed the view that the image of the royal wedding as inspirational put too much focus on outdated, sexist ideals. “Currently, it’s about who she’s marrying and what she’s marrying into – that’s not what I think you should be defined by”, she said.

Folorunso said she felt the implication that the wedding would have an impact for black women in the UK was “ignorant”.

“I don’t know if it’s a Scottish thing, but I don’t care about the royal family or the wedding – it doesn’t affect me. She’s a mixed-race American actress in her thirties, so her experience is so different to me and other black women in this country, so I don’t think it’s fair to even compare the two experiences.

“It’s almost kind of ignorant to compare the experiences and say ‘she’s going to do so much’ and that Britain is going to become less racist,” she said.

In fact, Folorunso suggested the media coverage around the wedding seemed designed to “shape this narrative to make this a race issue”.

“If they say, let’s have a 10 minute segment on Meghan Markle and we’ll have four black women on the panel, you’re making it a race issue. But I don’t think it’s integral to this,” she said.

This situation, she said, has only brought into sharper focus the lack of representation of black women in other circumstances. “A lot of black women or women of colour have been asked by media outlets to comment about it, but they wouldn’t normally be asked by the media for their voices.

“When else would you have a black woman on the 5 ‘o’ clock news? We actually have so much more to say than talking about this,” she said.

Picture courtesy of The USO