Something along the lines of… Earlier this week CommonSpace columnist and education writer James McEnaney responded to the Scottish Government’s schools governance review on Twitter. His thread, which was 100 tweets long, has been widely shared, and is now being republished (almost) in full. You can read the original thread here.

Still waiting for ScotGov to answer a few questions but here are some preliminary thoughts on the SNP schools governance review.

First and foremost, I remain baffled by how determined some people are to believe that changes to structures will solve problems. The government hasn’t even bothered to make a case for it (nor have their cheerleaders) and their own documents make clear again and again that this is the wrong course. But hey, why would that matter? The decision was made months ago and Sturgeon/Swinney were never going to be prepared to be told they were wrong. That said, let’s have a look at the documents, shall we?

First up is the government’s own analysis of the responses to their consultation, which I can only assume they hoped nobody would read. It states, in black and white, that the whole premise of the government’s policy was rejected by respondents.

When it comes to the regional bodies that will now be established, respondents (from all areas) rejected those too.

This criticism isn’t new – during the consultation process people and organisations (including the bloody RSA) lined up to tell the government that it had not made the case for its proposed changes. Their response was basically to put their fingers in their ears. Not terribly reassuring from a party seeking to introduce significant changes to Scottish education, is it?

The responses on “cluster working” seem interesting-this is clearly an area where progress could be (or *could have been*) made.

A focus on putting in place the support to allow more of this – without attaching it to governance changes or the inevitable increases in bureaucracy and uncertainty that they will bring – could lead to real improvements. The problem is that it would require fairly significant resources (money AND time) which this government seems determine not to provide.

As far as “school and teacher empowerment” goes, the answer to the government couldn’t have been clearer.

As I and others have been saying again and again – if the government isn’t willing to invest the money and create the time for improvement then it won’t happen. Increasing teacher numbers and reducing contact time (the amount of time teachers actually spend in front of a class) are absolutely necessary. And ignored.

Further details are provided later which heavily reinforce these points while also clearly criticising other areas of govt policy (like collating and publishing the data for school league tables). Expect all of this to be ignored as well.

It’s the same story when it comes to funding where only a minority supported the government’s plans and only within limited contexts.

The issue with procurement isn’t even, really, a funding issue – it’s a question of whether schools should be tied to specific suppliers. Most teachers will be able to tell you about their struggles with this sort of central ordering system (it’s called PECOS and comes from the Scottish Government) and, although there will be benefits, there are times when schools need to be able to go beyond its well-intentioned constraints (try ordering books that “aren’t on the system”, for example).

The staffing issue comes up again (and is much more complicated than most people seem to have assumed). More on that later.

Next up is ASN (an area I’ve been seeking clarity from the government after various people raised concerns).

Whether it applies here or not is unclear, but other documents related to this review define “consensus” as being reflective of 90% or more of respondents, so the strength of feeling is pretty clear. 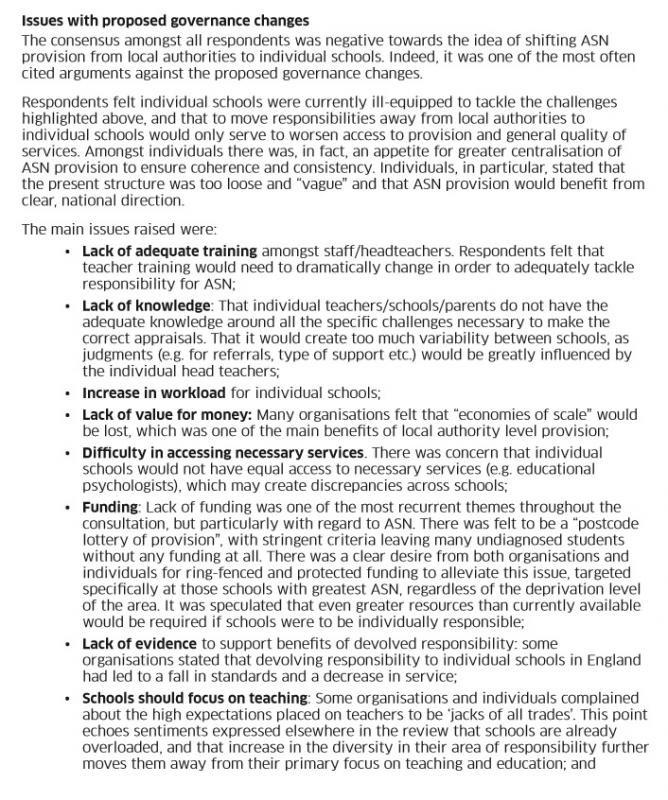 Once again, the answer is also clear: more resources instead of a change in governance. Starting to see a pattern?

Overall, the government’s own analysis of responses to its own consultation is summed up here:

The things causing problems in Scottish education (including failing literacy and numeracy performance) aren’t rooted in governance but rather in the refusal to address the two obvious ‘barriers to improvement’: budget cuts (including cuts to staffing levels) and workload (i.e. a lack of time to ensure that teachers are delivering the excellent education they want to provide). The government is desperate to distract attention from this because it highlights just how bad their own record is.

So on to the Next Steps & Executive summary documents. Combined, these are about 850,000 words long and yet ultimately they say very little. They are good for a laugh at a few points though – for example, there’s a whole section about “creating a school, teacher and practitioner-led system” in a document that is dedicated to ignoring the views of those groups. Very meta from ScotGov.

That part actually comes within a section of the Next Steps document entitled The Case for Change which, despite being long (and dull) enough to pass for a missing chapter of Moby Dick, somehow manages not to make any sort of clear or coherent case for the government’s proposed changes. Connoisseurs of Scottish education will be pleased to see a pointless infographic of the sort so beloved by those in charge of Education Scotland. 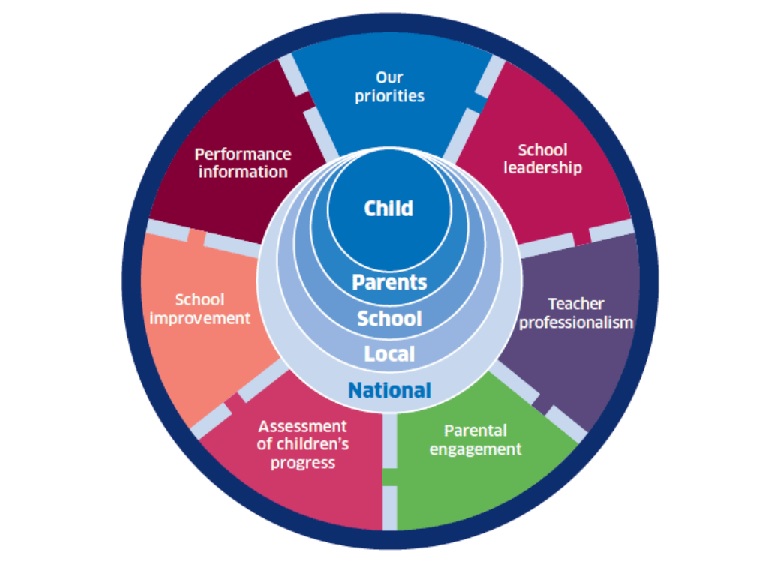 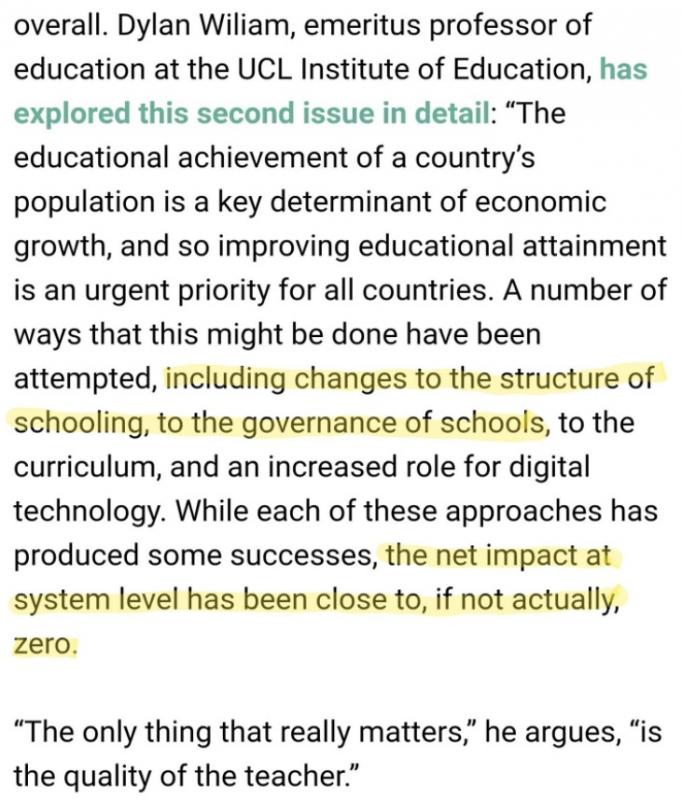 There’s also an utterly transparent attempt to explain why govt is just ignoring the responses it doesn’t like (i.e. most of them).

This includes an attempt to misrepresent all opposition as being ‘anti-change’, the sort of thing Gove would be proud of – at this rate Swinney will soon be referring to ‘enemies of promise’ and ‘the blob’. It’s a desperate tactic from a desperate government.

Interestingly, there’s also mention of addressing “the erosion of educational improvement capacity”, which sounds a lot like a “we made this mess so trust us to fix it” sort of approach from a govt that’s been in power for a decade.

This part is particularly damning (I can hardly believe it got through the proof-reading stage):

In essence the government’s own position seems to be that cuts have left councils struggling to focus on “tailored education improvement support” with their attention “understandably” centred on frontline delivery. But, rather than address the cuts (which are the actual problem and which the government could tackle) the SNP has instead decided to go for a reorganisation that, as we already know, has been roundly rejected. It’s a quite remarkable admission really.

We also get an outline of what different parts of the system will do once the govt’s reforms have happened. First, let’s look at teachers.

Points 2 and 4 are basically the same, and they also tie in closely with point 3. Point 1 is waffle.

There are some concerns about the ‘streamlining’ part, though, especially with SCEL (which has been a superb organisation) being effectively taken over by Education Scotland (which has been a very, very long way from superb). Overall the prospect of enhanced professional development for teachers sounds like good stuff but, as with everything else, it will depend entirely upon the government’s willingness, explored earlier in the thread, to increase teacher numbers and reduce their class contact time.

Next it’s headteachers, who will – it seems – be shouldering much of the burden of the government’s reforms (see Ross Greer trolling both the Tories and the SNP at once on this issue if you want a laugh). 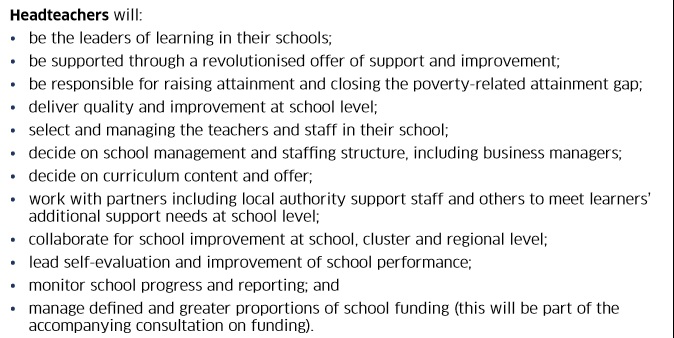 There are questions still to be answered here. How will the “responsibility” for raising attainment and closing the poverty-related attainment gap be manifested? Are HTs to become legally responsible for resolving the effects of poverty upon education? How exactly will that make it easier to improve education? And wasn’t there a time when Nicola Sturgeon wanted her own government to be judged on this, as opposed to individual headteachers? It’s no wonder concerns are already being raised about this aspect of the reforms.

Allowing heads to decide on staffing structure seems like a nod towards undoing the nonsense of subject faculties in secondary schools and allowing for the reintroduce of principal teachers. If so, great – but again, who is going to pay for it?

Selecting and managing the staff is another area to be clarified. The system used by some councils, where teachers are centrally hired and then allocated, is ridiculous and needs to be ended, but the govt has thus far failed to explain the full implications. Can HTs fire staff they decide aren’t good enough? What sort of processes will be in place? And, given that councils will still actually employ teachers, will local authorities end up having to find them a new place to work anyway? How would this affect the right to strike? This all matters, and one would expect @EISUnion and @SSTAtradeunion to be on top of this already. Watch this space for more info.

So the govt has made a big show of ‘handing sweeping new powers to headteachers’ but we’re still short on detail.

Now to councils, where significant changes are planned (again, despite the consultation responses being negative). 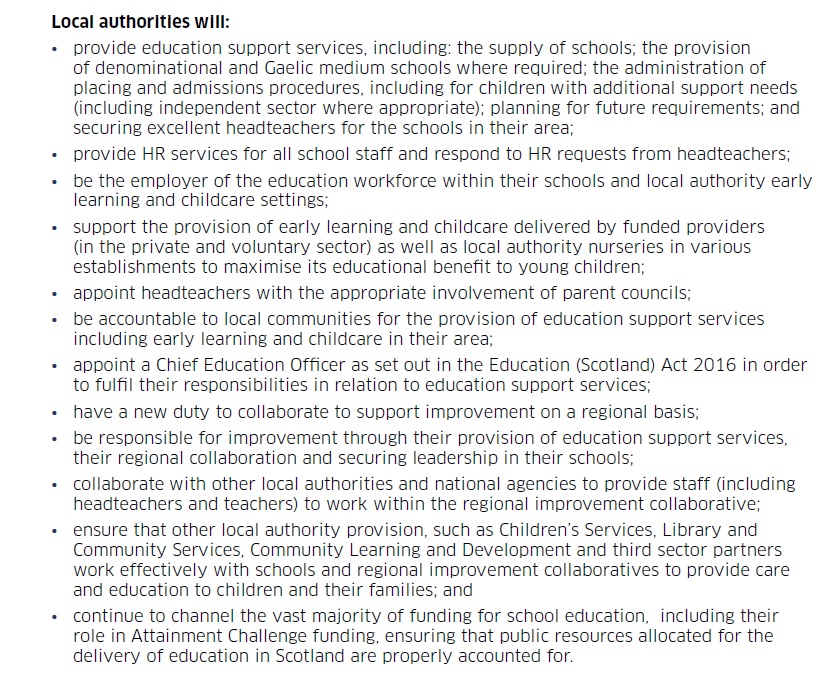 COSLA didn’t pull any punches in its statement responding to these proposals and for good reason. 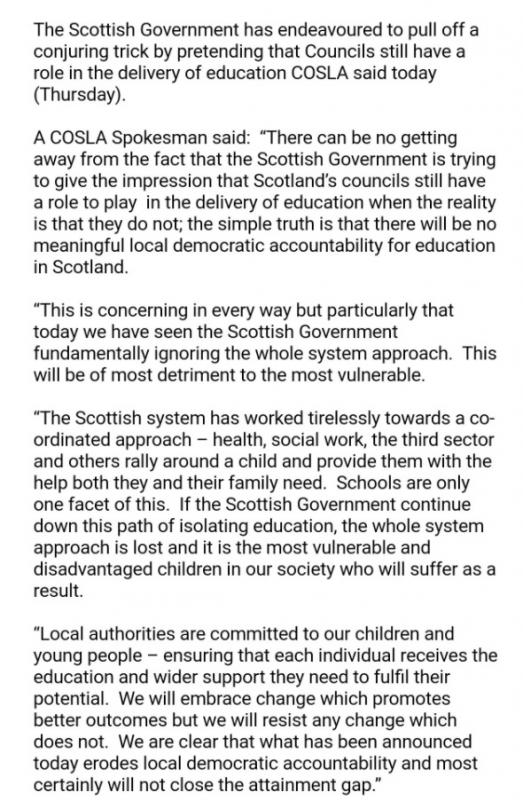 Councils will essentially be there to “channel” money to schools, provide services such as HR and admissions, and appoint headteachers. They will also remain responsible for the “supply” of schools, future planning (despite not being allowed to make staffing decisions) and, as noted already, remain the actual employers of teachers. They will therefore continue to technically spend most of the country’s education budget while, in theory, having little if any control over how that money is spent.

It is difficult to argue with the assertion that, following these changes, there will be little local democratic accountability in the education system. It seems quite clear that the SNP has gone as far as it thinks it possibly can in cutting councils out of education in Scotland.

And so we come to the Regional Improvement Collaboratives, a new layer of control that the govt intends to add to the Scottish education system. 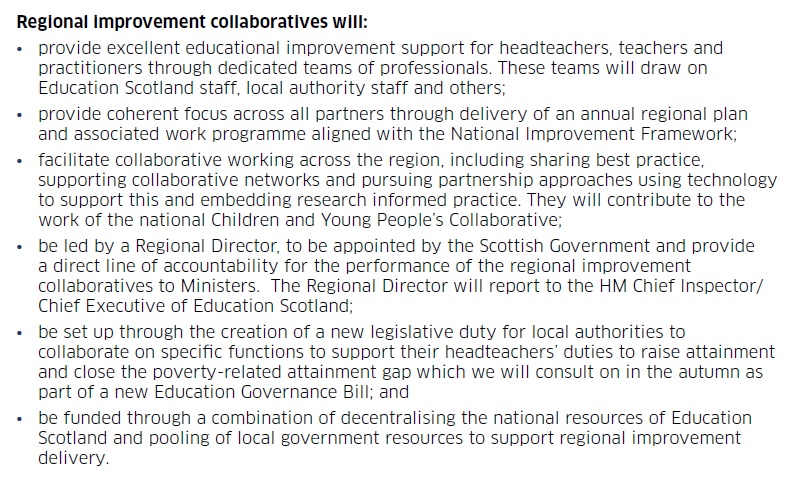 These bodies will be led by govt-appointed directors (salary not yet specified) who also report to a govt agency. Their job will be to ensure that regional education plans are aligned with central govt policy. This move will therefore centralise a huge amount of power in the hands of the Scottish government (regardless of their insistence that it actually represents radical devolution).

Remember that these plans were comprehensively rejected during the consultation but the govt is absolutely hell-bent on seeing them implemented.

How much will it cost? Who knows. How will it all be paid for? Apparently by moving money around from both Education Scotland and councils.

The verdict? For a flagship policy this is long on rhetoric and short on detail (surprise surprise).

So there we are – and that doesn’t even cover everything. And, as I said at the start, I’m still waiting for some answers from ScotGov. The changes to supporting organisations like Education Scotland, SCEL, GTCS etc deserve more detailed attention.

And of course there’s now a funding consultation, although given the way the first consultation was treated you have to ask: is there any point bothering to fill it out? Answer – probably not. The decisions have been made and it’s quite clear that Swinney/Sturgeon aren’t for listening to anyone except the Tories and a few newspaper columnists.