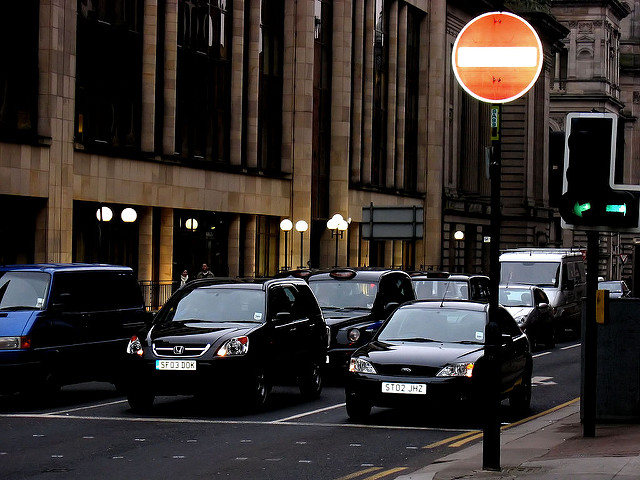 A SCOTTISH GOVERNMENT consultation on Low Emission Zones closed this week, and environmental campaigners Friends of the Earth (FOE) Scotland have been joined by Health Protection Scotland and Glasgow Centre for Population Health in backing the policy as part of a broader, comprehensive approach to reducing air pollution.

Low Emission Zones (LEZs), in which access by high emission vehicles is restricted, are to be introduced in 2018 in Glasgow, in 2020 in Edinburgh, Aberdeen and Dundee, and, where necessary, in all other Pollution Zones by 2023 – although what this will look like in practice is still to be confirmed.

The World Health Organisation reported this year that Glasgow was one of the most air polluted cities in the UK.

Glasgow Centre for Population Health (GCPH), which researches and supports approaches to improve health and tackle inequality in Glasgow, has backed LEZs as “an important part of the solution” to poor air quality, which it describes as “a health inequalities and social justice issue”.

GCPH’s submission to the consultation on LEZs states: “Vulnerable groups – the very young, older people and people with pre-existing health issues such as respiratory conditions – are disproportionately affected [by air pollution].

The submission adds: “The more affluent sections of the population contribute far more to road transport-related climate change emissions than the most deprived and other transport related health inequalities 5 but that it is more deprived communities that suffer the most from the impacts of air pollution.”

LEZs, GCPH suggest, have the potential to not only reduce congestion but to encourage more people to walk, cycle and use public transport, improve liveability in urban communities, and benefit local economies.

However, in order to support this effective implementation, GCPH argue that there should be “explicit links” between LEZ plans and the Cleaner Air for Scotland strategy and wider transport, public health, climate change and sustainability policies.

Acknowledging potential barriers to those who are unable to afford a new, compliant car, GCPH suggest that the introduction should be phased and supported with alternative transport provision such as “better access to car clubs, bike hire schemes and enhanced public transport”.

Health Protection Scotland (HPS), a division of NHS National Services Scotland, has also responded to the consultation on LEZs, noting the “short and long term adverse effects on human health” of air pollution.

HPS has given qualified backing to LEZs, raising a number of potentially unintended consequences if the policy is not implemented with due consideration to concerns. One such concern is the potential “displacement of more polluting vehicles to areas where there is relatively more risk of harm to vulnerable individuals”.

Another is that, as suggested by GCPH, those who are unable afford to replace their vehicles could be penalised, thereby exacerbating inequalities in transport access.

HPS argues that LEZs must therefore be regarded as part the broader Cleaner Air for Scotland strategy and implemented alongside other initiatives supporting the use of public transport and active travel.

Friends of the Earth Scotland is an enthusiastic supporter of LEZs, albeit arguing that their effectiveness depends upon adequate funding, the inclusion of the most polluting buses, vans and lorries in the policy, and the introduction of other measures to support a shift towards walking, cycling, and using public transport.

“The Scottish Government must fund Low Emission Zones and not pass the bill onto cash strapped councils. The Ambient Air Quality Directive, which is the EU directive that we are in breach of, places a legal duty on Member States to comply and that duty is placed on the Scottish Government in the context of air quality being devolved.

“LEZs operate successfully in hundreds of locations across Europe. London’s Low Emission Zone has operated for nearly a decade and is being improved into an Ultra LEZ which will encompass a larger geographical area and more vehicles.”

Low Emission Zones and wider efforts to reduce air pollution have also been backed by British Lung Foundation Scotland, the Transport Research Institute at Edinburgh Napier University and Spokes, the Lothian cycle campaign, among a range of other organisations.