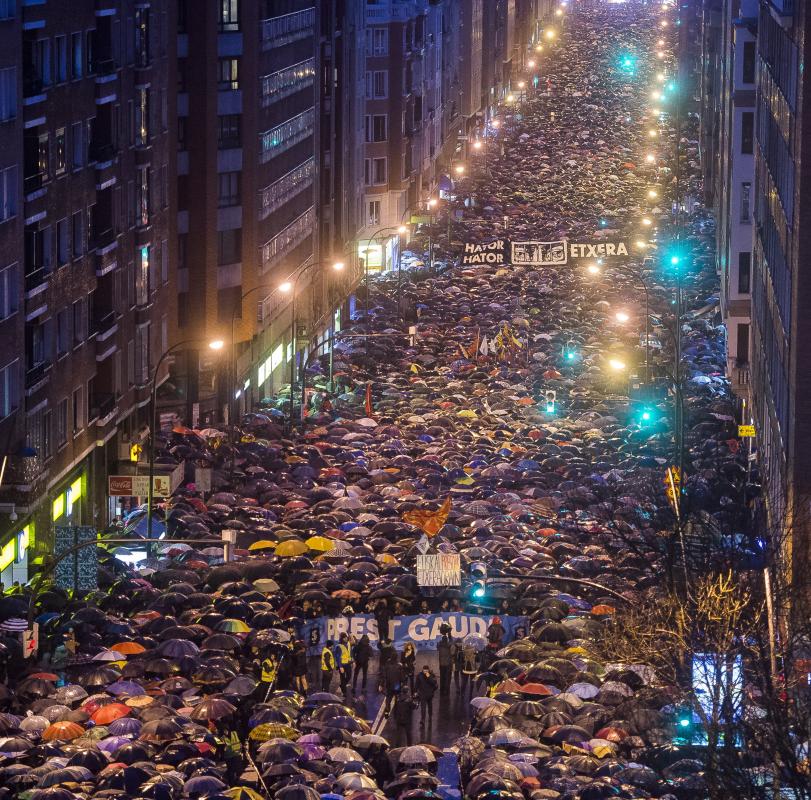 CommonSpace speaks to Ander Larunbe Anderson, international representative of the socialist pro-independence Basque party Sortu, about the challenges ahead for conflict resolution in the Basque Country

IN MAY 2018, the Basque nationalist paramilitary group Euskadi Ta Askatasuna (ETA) officially disbanded, almost half a century after first engaging in political violence and just over a year after the group staged a disarmament ceremony in the south of France.

The development signalled a new era in the politics and relations of Spain, France and the Basque Country, albeit one that retains many unresolved issues.

Amongst the most pressing of those concerns was articulated in April, several weeks before ETA’s disbandment, which saw thousands of demonstrators march in protest on the streets of Bilbao in Northern Spain, calling for transferral and better conditions for Basque political prisoners who remain incarcerated.

Rallying under cries of “Basque prisoners home”, the protest demanded that those imprisoned for their membership or associations with ETA should be moved to prison facilities closer to the Basque Country, as opposed to keeping them hundreds of kilometres away, where their families often have difficulty visiting them – a practice commonly known as ‘dispersal’. Additionally, freedom for those prisoners suffering from ill health has also been called for.

In accordance with Spanish law, the vast majority of such Basque prisoners are kept in under ‘first degree’ conditions while in prison, which allows them no leave and only three to four hours outside per day. This is intended to apply to the most dangerous or violent of prisoners – a categorisation which the prisoners’ lawyers have argued does not apply in their case.

According to the Social Forum, an organisation which works closely with the families of Basque prisoners, some 300 ETA members are currently imprisoned throughout Spain, France and Portugal, while up to 100 more remain on the run.

The Spanish Government has thus far refused to alter its policy towards prisoners which it considers members of a terrorist movement.

In late October, the International Contact Group (IGC), the independent organisation seeking conflict resolution and the normalisation of political and civil liberties in the Basque Country, wrapped up its work after eight years, arguing that their mandate had been fulfilled.

The IGC’s Brian Currin nonetheless acknowledged that there are still issues to be addressed, with the matter of Basque prisoners being chief among them. However, Currin said that there are reasons to be optimistic, pointing to the recent change in government in Spain and the current parliamentary majority in Madrid, which may be more flexible on the issue than their predecessors.

Earlier this year, the Basque socialist party Sortu – which originates from the pro-independence ‘abertzale left’ and openly rejects political violence of any kind – argued: “It is urgently necessary to abolish the dispersal, to let sick prisoners go home and to end the first degree (regime).”

Despite its rejection of terrorism, in 2011 the Spanish Supreme Court decided that Sortu was sponsored by the “Basque nationalist left’ as a successor to Batasuna, ETA’s political wing, and was thus unable to register as a political party with Spain’s Interior Ministry.

In light of recent developments, CommonSpace spoke with Ander Larunbe Anderson, a Basque-Scottish activist and one of Sortu’s international representatives, about the challenges facing  those seeking freedom and justice, both in politics and behind bars.

Commenting on the end of the ICG’s work, Anderson said that the organisation “had to work in very difficult circumstances, without engagement by the Spanish state – indeed, with its opposition.

“This led to innovative solutions being sought by the Basque ondependence movement in order to bring all the peace it could to the Basque Country. In other words, the entire process was unilateral from the ceasefire, to permanent ceasefire to disarming to the final dissolution of ETA in May this year. It has been a process between the armed group, Basque society and the international community. This has been lauded in many quarters” – including by the House of Commons – “and has brought a profound turnaround in the political dynamics of the Basque Country.”

Nevertheless, Anderson continues, “the downside is that there are issues that only the Spanish State can resolve, most pressingly, those of politically motivated prisoners and on-the-runs.

“Whilst the French state is implementing transfers to prisons as close to the Basque Country as possible (there are no prisons inside the part of the Basque Country in France) the Spanish State has resisted calls to engage positively. Even the new Socialist Party government has not matched words with deeds.”

Asked what he feels the next steps need to be in order to arrive at a solution for the Basque prisoners problem, Anderson replies: “The main thing to bear in mind is that no conflict resolution process in the world has ultimately been successful without constructively addressing the issue of prisoners. Ireland or South Africa are relatively recent examples.

“Therefore, it is high time the Spanish state accepts the new reality on the ground and lets go of legal reforms and penitentiary policies designed for war, and begins looking to the future rather than the past.

Elaborating on what this could mean in immediate, practical terms, Anderson says there are humanitarian issues that should have been resolved a long time ago and are not contingent on legislative changes.

This would include compassionate release of seriously ill and advanced aged prisoners, and the repatriation of all prisoners to jails in the Basque Country.

At present, only four of the 265 Basque prisoners are currently held in prisons in the Basque Country and 67 per cent of them (142) are held in prisons between 600 and 1100km away from their relatives.

In addition, there are many measures which would depend solely on the political will of the Spanish state to ease the process, such as the “first degree regime.”

“95 per cent of Basque prisoners are currently classified as ‘First Degree’,” Anderson points out; “the highest security classification, which prevents their access to penitentiary benefits, and keeps them in harsh living conditions (e.g. only 2-4 hours a day out of their cell). Basque prisoners are systematically classified as ‘First Degree’ and kept in that category for years, despite it theoretically being an exceptional and temporary measure.

“In addition, 27 prisoners are being permanently held in isolation blocks. It recently transpired that prisoners’ requests to be reclassified as ‘Second Degree’ are being systematically refused.”

Finally, Sortu has stated that these issues, among others, relating to the conflict and legacy of the Basque Country’s history of conflict need to be addressed politically. This outcome, Sortu argues, has been demanded repeatedly by a large majority of Basque society.

“It is not possible to have a normalized political life in the country with hundreds of politically motivated prisoners still in prison,” Anderson argues. “No conflict resolution has ever happened anywhere without constructive solutions to the issue of prisoners and on-the-runs.

“In this respect, the prisoners have repeatedly stated their will to engage with the penitentiary system and have moved to be part of the solution, including a collective and individual committent to purely peaceful means.”

Many of the Basque prisoners’ convictions occurred in cases where ill treatment and torture has been alleged. This too, Anderson says, should allow for a review of these convictions.

READ MORE: ‘Extolling terrorism’ in Spain: The Spider Operation and the persecution of freedom of expression

“In this respect,” Anderson observes, “it is interesting to note that the ECHR has convicted the Kingdom of Spain for not investigating torture complaints by Basques on eight separate occasions. In February 2018 it added a further conviction for ill treatment of two Basque detainees. An official investigation commissioned by the Government of the Basque Autonomous Community concluded in December 2017 that there have been at least 4113 confirmed cases of torture since 1960. In January 2018, the Spanish Government blocked the decision by the Parliament of Navarre to commission a similar report.”

While the IGC may have some optimism about the current Spanish Government, its continued intransigence over Catalan political prisoners does not bode well for a sea-change in its attitude to Basque prisoners associated with a violent paramilitary. This is not aided by the fact that successive Spanish legal reforms have toughened sentencing and serving.

“In fact,” Anderson says, “despite there being no official life sentence in the Spanish legal system, many Basque prisoners end up serving longer jail sentences than people who have received life sentences in other European countries.

“There are people in jail now who, if nothing changes, will serve an effective 40 years, which would mean that in 2050 there would still be Basque politically motivated prisoners.

“This is no way to have a society move on from conflict.”