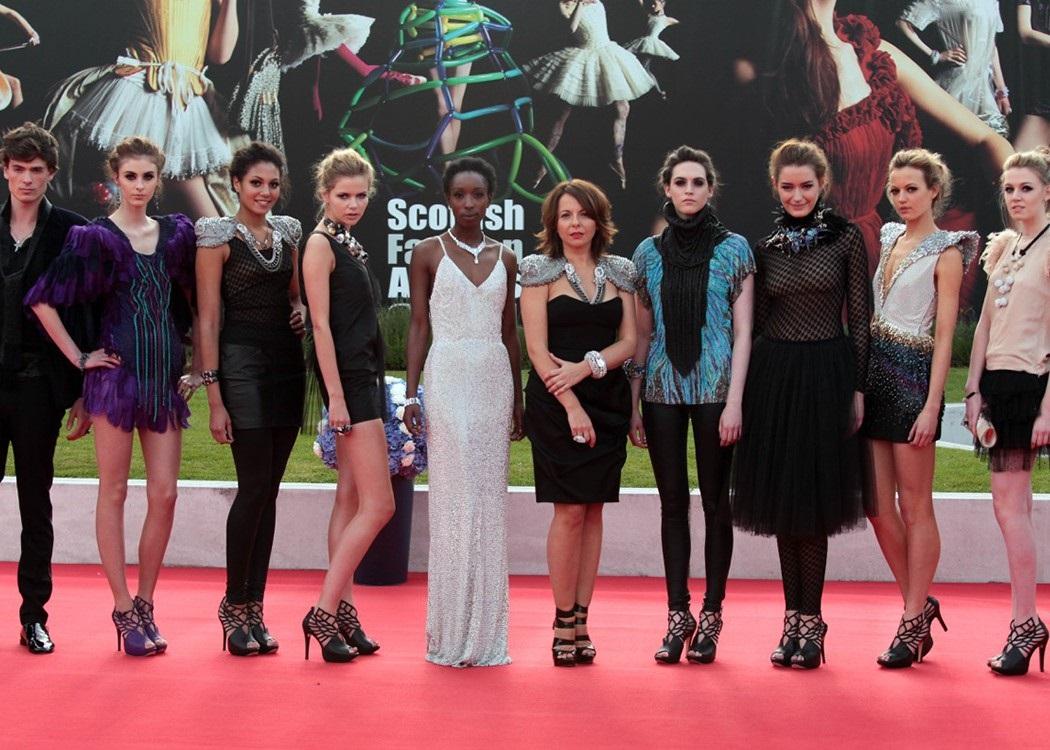 SCOTTISH FASHION comes with connotations of being a bit old-fashioned and orthodox. Today’s industry is trying to move forward and break away from these stereotypical old ideas, among other things, and is striving to look to the future rather than the past.

Sarah Hill is a postgraduate fashion student studying Fashion MA at Kingston University. Originally from Paisley, she previously was an undergraduate who studied fashion design for industry at Heriot-Watt University, based at the School of Textiles and Design.

Hill has produced various projects on topics such as politics and fashion and some based on social design. Her political project called ‘The Democratic Republic of All Things Fair and Equal’ argues, in part, for a better dress code for politicians. It also focuses on past UK general elections, looking at different statistics and polls.

The Democratic Republic of All Things Fair and Equal (Pic: Sarah Hill)

Hill also produced a social design project called The Commune Shop, a proposal for a theoretical swap shop where instead of exchanging money for goods you give good deeds: Goodies for Goodies.

Hill’s approach is to create something more fresh and original in Scottish fashion and move away from some of the more traditional ideas associated with the industry. It is known for its old-fashioned style of clothing, with fabrics such as tweed used primarily to convey a traditional look. However, while this type of material is still extensively popular with designers, it could be considered outdated.

“A lot of traditional Scottish design can be quite twee,” Hill says. “I love tweed but then tweed’s often used in a really twee and staid way rather than something new and exciting. Same with tartans; I’m from Paisley, Paisley patterns and things.”

The most exciting thing within the current Scottish fashion scene for Hill is the smaller businesses within the industry. A shift and focus more on them is what she prefers.

“If people have got their businesses based in Scotland they’re going to employ Scottish people and maybe collaborate with other Scottish designers and artists and textile designers,” she says.

This could enable a more collaborative process between home-grown designers and perhaps makes it niche.

Dr Tessa Hartmann is the founder of Hartmann Media, the award-winning fashion, beauty and lifestyle brand and communications agency that produces the Scottish Fashion Awards. In its 11th year, this year’s awards will be held on 21 October, with a new sponsor: the Rosewood Hotel, in London.

Hartmann is impressed with “the abundance of talent” within the Scottish fashion industry.

“He’s really being noticed. He is very edgy, completely fearless, so unique and original and he’s making a lot of waves.

“The challenge for us is to constantly keep at the top of the game, make sure we find these people and make sure we give them that platform that they so richly deserve. The challenge Scotland has is to always portray what we are doing as an individual nation outwith everybody else. There is so much competition out there from the biggest fashion cities in the world: London, Paris, [New York] and Milan.

“I see our job as to provide a platform that shout about the designers, the textile houses, [the] cashmere companies, the photographers.”

Of the current Scottish fashion designers, Hill admires designers like Navarah, Isolated Heroes and Kestin Hare, the latter of which designs menswear and has recently opened up a shop in Princes Square in Glasgow.

Hill says: “[Kestin Hare] looks like a really interesting brand, being contemporary and fashion-forward. There’s some really nice prints. I think that’s quite interesting and I’d be interested in seeing where he goes next. I think that might be quite big in the future.”

While Hartmann says that there is Scottish fashion outreach in key cities, she doesn’t believe that Scotland itself has a fashion industry.

“Kestin Hare looks like a really interesting brand, being contemporary and fashion-forward. There’s some really nice prints. I think that’s quite interesting and I’d be interested in seeing where he goes next. I think that might be quite big in the future.” Sarah Hill, fashion student

“When people ask me: What is the state of the Scottish fashion industry? The honest answer is that I don’t really believe we have one. I know people will shout me down for that. But I do believe that we have a phenomenal pool of Scottish creatives who are working within the business of fashion all over the world.

“I don’t think the government takes the Scottish fashion industry seriously enough. It needs serious investment thrown at it.”

It is acknowledged that any kind of awards show will bring prominence and media coverage to it and the nominees. Hartmann believes the Scottish Fashion Awards have a significant impact on Scottish fashion designers and students.

“We know the value of a nomination and a win; we monitor all the people that have won. It’s made a huge impact not just to their revenue streams but also to their global awareness and the buyers who come and look at their ranges and their work.

“It’s a real benchmark of success and that’s coming from them. They know they can use that identity and reach out to people and people will come and see them.

While Hartmann says that there is Scottish fashion outreach in key cities, she doesn’t believe that Scotland itself has a fashion industry.

“It is the industry that decides [who wins] and that’s why I think the designers appreciate it.”

On the other hand, Hill is “in two minds” about the Scottish Fashion Awards. While she thinks they are good to raise the profile of new-start designers, she believes the awards portray a false Scottish identity.

“[Scottish fashion designer] Christopher Kane always wins an award at the Scottish Fashion Awards. Designers like him and Jonathan Saunders in the past and Chanel and Vivienne Westwood have been noticed for using Scottish fabrics,” she says.

“There is so much competition, things keep speeding up. There are so many collections every season. I think an awards ceremony like that celebrating Scottish design within that context is only going to be relevant for a short period of time.

“Fashion design will have to come back to smaller-scale businesses, like what kind of happens in Scotland is the smaller businesses just servicing a narrower group of people or more craft businesses rather than the big flashy companies.

“Some of them are great; I love the designs of Christopher Kane, don’t get me wrong, but that industry is limited in what it’s able to continue to do. I don’t think there’s enough money in the world or demand for that.”

Ethical fashion is an area of the fashion industry that is gaining more prominence. Hartmann says “from a branding perspective” it’s very important.

“You can’t afford to ignore it now. It’s a huge growth area in terms of the consumers are demanding that it’s done and, therefore, the brand has to respond. Whether the brand has the money to invest properly in that area is another matter.”

Hill echoes this sentiment and thinks it should be at the “heart” of any business, not just fashion. She interned with ethical fashion company Goodone in 2012, based in London.

Hill is “in two minds” about the Scottish Fashion Awards. While she thinks they are good to raise the profile of new-start designers, she believes the awards portray a false Scottish identity.

“I think it’s really important; it’s something that I would like to do. [Ethics] should be at the heart of any business.

“I worked for a fashion brand in London, I interned with them for a little while. They made all their stuff out of recycled fabrics. That’s obviously great because it’s reusing something that was going to landfill.”

It is clear that the Scottish fashion industry is constantly developing. People like Hill and Hartmann and the Scottish Fashion Awards are important to the way the industry is moving forward.

With designers like Charles Jeffrey and Kestin Hare, it is noticeable that they are paving the way for boundary-pushing, contemporary fashion design in Scotland.