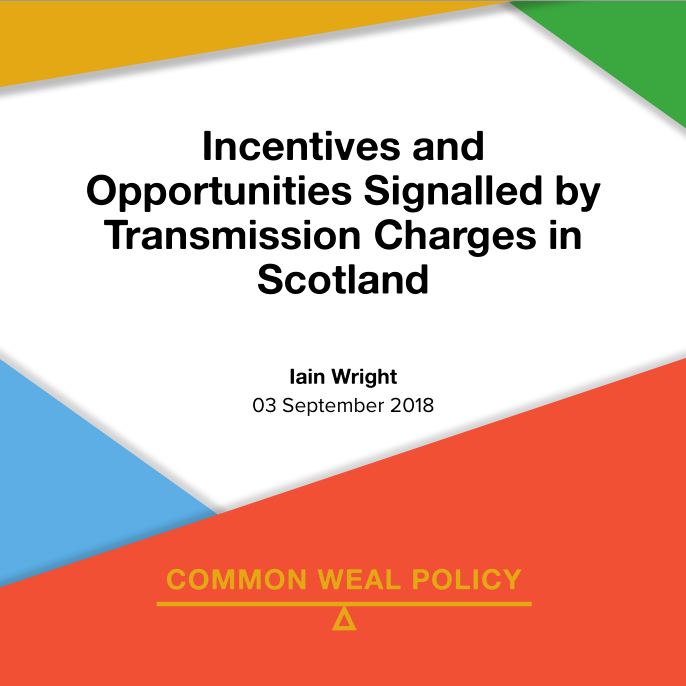 A new Common Weal Policy Paper concludes that Scotland is not well served by the UK’s National Grid and the current system restricts the development of Scotland’s renewable energy potential and leads to high charges for Scottish consumers.

The paper has been written by Iain Wright who has more than 35 years of experience working in the energy sector in both Scotland and Ireland and can be read in full here.

The UK’s National Grid has been designed for an era where the fuel for power plants (chiefly coal and gas) could be transported more efficiently than the generated electricity. This has lead to a system of charging where power stations are incentivised to build close to major population centres such as the South East of England. In numerical terms, energy providers are charged a tariff of around £24/kW to connect a wind generator to the National Grid if the generator is installed in the North of Scotland. However, if the same generator is installed in West Devon and Cornwall, the provider would receive a subsidy of £4.79/kW.

As renewable generators such as wind turbines must be built where the wind is at its highest power density and as their “fuel” cannot be moved in the way that coal and gas can, the current grid charging system makes no sense for the purposes of encouraging the development of Scotland’s renewable energy potential.

Further to this, the grid’s charging system takes no notice of the location of the end-users of the generated power. An energy customer in Scotland must pay the same price for power regardless of whether or not the power they are using is being generated elsewhere in the UK or by a wind turbine nearby.

This means that high energy intensity users such as aluminium smelters, chemical manufacturers and data centres have little incentive to build renewable generators on-site in order to reduce their energy costs.

The paper therefore makes the case that the UK’s energy grid is reformed so that it better reflects the energy technology and economic needs of the 21st century. Tariffs should be re-calculated to better encourage the placement of renewable generators in areas where they can operate most efficiently and incentives should be developed to allow industries and communities to benefit from the renewable generators build either by them or on their doorsteps.