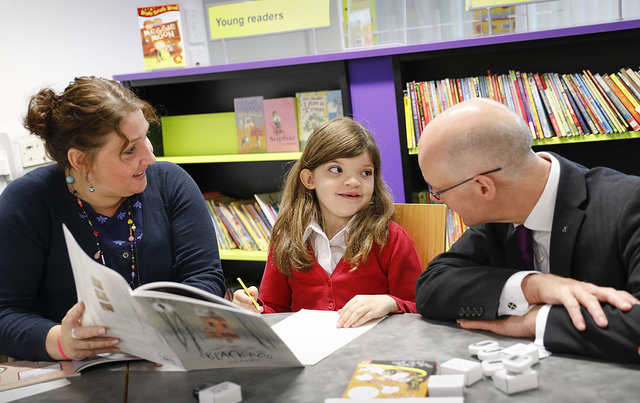 Budget cuts have damaged the education of those with additional support needs, MSPs argue

BUDGET CUTS in Scottish education mean that school pupils in Scotland with additional support needs (ASN) are being short-changed, argued opposition MSPs in a Holyrood debate on Thursday afternoon.

Opposition MSPs speaking on the ‘presumption of mainstreaming’ – as the entitlement of children with ASN to be education in mainstream schools has come to be known – broadly welcomed the sentiments of the Scottish Government on the issue, but frequently criticised the financial decisions which some argued have undermined it.

“A commitment to and belief in inclusive education have underpinned the approach to education policy and legislation in the Scottish Parliament since 2000.” Education secretary John Swinney

Opening the debate, Scottish education secretary John Swinney said: “A commitment to and belief in inclusive education have underpinned the approach to education policy and legislation in the Scottish Parliament since 2000.

“The Standards in Scotland’s Schools etc Act 2000 was one of the first pieces of legislation to be passed by Parliament, and it features a requirement that education for all children be provided in mainstream schools, except in prescribed exceptional circumstances.

“Those provisions commenced in 2002; their importance cannot be overstated. They created an entitlement for children and young people whose parents would previously often have had to fight for the right of their children simply to be educated.

“The presumption of mainstreaming, as it has become known, firmly closed the door on institutionalisation of pupils who need support, and it recognised the value to society, communities and families of pupils learning in their communities, wherever possible, while allowing those who need specialist support to receive it.”

Scottish Labour education spokesperson Iain Gray argued: “We cannot, in all conscience, properly rededicate ourselves to the principle of a presumption of mainstreaming or properly endorse the legal and administrative framework for delivering inclusion if we are not prepared to acknowledge and face up to the reality of the resources that are required to make that happen properly.

“To do so is to disrespect the everyday, lived experience of teachers, parents and—above all—those pupils who say that they do not feel that they are receiving the support that they need.

“Budget cuts have led to over 500 fewer specialist ASN teachers and a loss of one in ten ASN assistants in that same time.” Scottish Green education spokesperson Ross Greer

Scottish Green education spokesperson Ross Greer pointed out his contribution that “Since 2010 annual education spending in Scotland has dropped by about £490 per primary school pupil and £150 less per secondary pupil.

“Budget cuts have led to over 500 fewer specialist ASN teachers and a loss of one in ten ASN assistants in that same time. At the very same time we are identifying more additional needs amongst pupils, with around one in four pupils now requiring some kind of additional support.”

Speaking to CommonSpace, Greer elaborated on his argument: “I believe absolutely that the government is committed to the inclusion agenda in principle. The problem is they are trying to address a number of challenges in Scottish education at the moment, without addressing what caused them.

“What caused so many of the challenges in Scottish education – whether it’s the issues of teacher working conditions, or the inclusion agenda not functioning well, kids with additional support needs being excluded from mainstream schools – these have been overwhelmingly caused by austerity. They’re the result of cuts – losing the 500 ASN teachers, the hundreds of assistants, the 4,000 classroom teachers, etc. The government won’t face up to that reality.

“So, the agenda that they’ve got is something we can all absolutely welcome – further guidance can be welcomed, improvements in initial teacher education can be welcomed. But none of that will address this core issue, which is one of finances and capacity.

“When you cut the budgets, you lose staff. You simply don’t have the capacity. And it begins to build up an ever-growing problem, because as you lose staff with experience, you’ve got staff coming in whose training in this area is quite significantly dependant on experience being passed on from pre-existing staff. Those pre-existing staff are leaving. We’ve got a huge retirement bubble we’re about to come across that’s going to compound this issue.

“My frustration with the government is that, on the whole, they’re simply not willing to address the root cause of so many of the problems in Scottish education, problems that relate very directly to kids with additional support needs. Because they’re financial problems, as a result of financial decisions taken over the past 10 years, while the SNP were in government.”

In May 2016, the teachers’ union NASUWT called for a reduction in class sizes where ASN pupils were present, while a survey by the charity ENABLE found that seven in 10 pupils with learning disabilities were not getting enough time or attention from teachers to meet their needs.

Speaking at the time, ENABLE Scotland’s Director of Campaigns and External Affairs Jan Savage said: “The presumption to mainstream, as current guidelines promotes, does not always mean inclusion. Simply being present in the classroom doesn’t mean being included.”