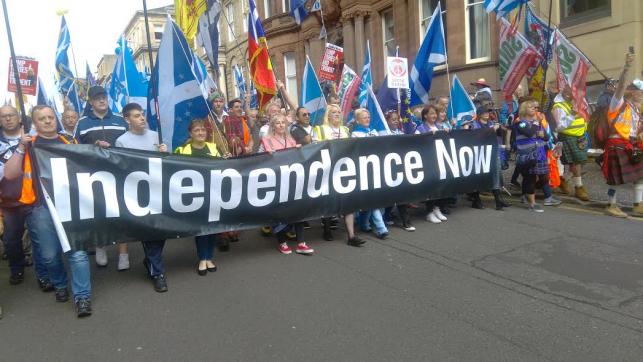 PRO-INDEPENDENCE supporters held events across Scotland to coincide with the anniversary of the 2014 referendum.

A march, organised by All Under Oner Banner Saor Alba (AUOBSA), took place through the streets of Glasgow city centre that joined with a rally hosted by Hope Over Fear (HOF) at the city’s George Square on Saturday.

On Sunday, the Yes Bikers for Scottish Independence (YBSI), who also attended the event in Glasgow on Saturday, roared thought Edinburgh during a convoy that ended outside the Scottish Parliament.

AUOBSA had originally been asked to disperse at Glasgow Green by Glasgow City Council (GCC) who told CommonSpace they had concerns about the number of people due to attend both events.

“Whilst on the route of the Procession, as we travelled down Union street, we informed the police of our decision to breach the council’s biased decree.” All Under One Banner Saor Alba

A post on the group’s Facebook page stated they decided to join the HOF rally after their procession.

The post read: “Whilst on the route of the Procession, as we travelled down Union street, we informed the police of our decision to breach the council’s biased decree, to which the police placed their van in the middle of Argyle Street in a feigned attempt to stop us.

“Then peacefully yet assertively we halted the procession with many participants sitting down on the road in protest.

“It was at this point the police made a judgement call and moved their vehicle out of the way to allow us to process towards Freedom (George) square.”

People of all ages were in attendance at the events that came together mid afternoon.

On Friday, GCC told CommonSpace that HOF had sought, and been granted, permission to hold the rally to mark the third anniversary of the historic referendum.

The YBSI gave supporters high-fives as they paraded around George Square on Saturday.

Reports suggest “thousands” of people conversed on George Square to enjoy speeches from guest speakers and music as organisers tried to capture the spirit the Yes movement had in 2014.

In addition, they also hoped to “unite” quarrying factions of the Yes movement to come together for the ultimate goal.

“There was no arrests and no apparent issues.” Police Scotland

Reports in the media showed unionist supporters being targeted for waving a Union flag at independence supporters after videos circulated on social media.

They showed the man being heckled before having his flag taken from the mast he was holding as he walked away from the area.

Police Scotland told us no complaints had been made and the events passed “without incident.”

A police spokesperson said: “There was no arrests and no apparent issues.”