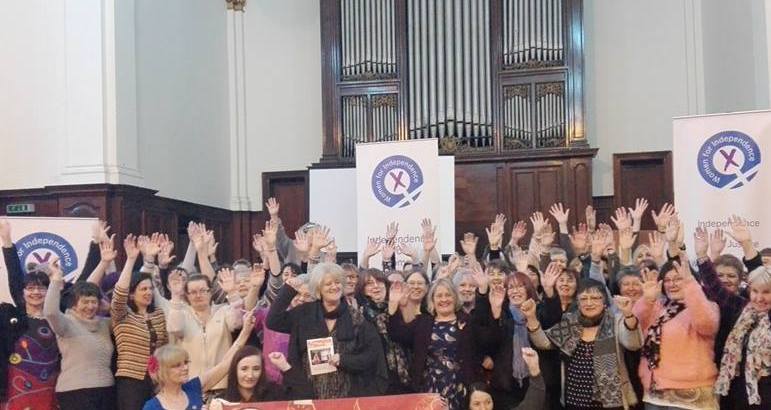 WOMEN FOR INDEPENDENCE (WFI) will explore what it means to make life accessible for women in Scotland at its national council in Paisley on 23 June.

Open to all women, the event will consider how women, particularly those facing barriers of geography and disability, can have equal access to politics, health and social care, reproductive rights, and other aspects of life.

The event will also hear from Highland SNP councillor Emma Knox, who made use of Access to Politics, an initiative aimed at addressing the barriers to disabled people’s full participation in politics.

Through a series of workshops and ‘open mic’ sessions, women will have the chance to share their own views and experiences on accessibility.

Margaret Young, WFI member and organiser of the event, told CommonSpace that its focus was on “understanding that all women’s voices matter” and enabling women to realise “they’re not alone and there are other women facing similar things”.

“This is a way to discuss things without the ‘Not All Men’ noise in the background.” Margaret Young, Women for Independence

“We’ll also be looking at health and social care issues and women in rural communities – when services are remote, this has more of an impact on women as they’re more likely to have caring responsibilities.”

More than simply identifying issues, Young said that the event will also aim to develop solutions and to make clear to policymakers that women’s wellbeing is affected by their decisions.

Young said that women-only spaces such as this event are important to engaging women fully in policy discussions. “Women are less likely to talk in meetings and to bring up issues which are specific to them.

“Back in the 2014 referendum, we had a meeting in Perth and 1000 women came. We had an open mic session and we thought ‘will women even want to do that?’, because when you went to other meetings, women didn’t speak,” she said.

“We found it was the opposite – women really wanted to express their views.

“Some women will be quite happy to speak in any company and that’s great, but a lot of women don’t feel confident, so that’s why we like to facilitate that role.”

Young said that the women-only space also offered the chance to discuss issues without the fear of defensiveness which can arise in a wider audience. “When there’s an issue raised which a lot of men – or people generally – haven’t realised is an issue, they can feel they are being criticised,” she said.

“This is a way to discuss things without that noise – the ‘Not All Men’ noise – in the background.”

Through WFI’s research with women who voted No in 2014, Young said the organisation has identified significant value in women speaking directly to other women about issues which affect them.

“We found that women agreed on a lot of things in the referendum but they hadn’t heard that – to them it was just men shouting at other men on the telly. They said they didn’t see this as a change for them and they weren’t hearing how it would impact on them,” she said.

“I think it’s important that they can sit and talk to us and we’re not critical of them – I don’t think that would have been as possible without that [women-only] space.”

WFI national committee member and SNP councillor Julie Bell said that, for her, the event would be another important opportunity for the organisation to gather women’s views on the issues which are important to them – an endeavour which WFI has been undertaking through its national councils over the past two years.

“We are compiling these items into a document which will give us a manifesto on what women want to see to give us a gender just society, now and moving forward in an independent Scotland,” she explained.

Due to be published in time for WFI’s AGM this November, the manifesto, Bell said, will aim to “say to all parties in Scotland, ‘this is what we want and what are you prepared to do to achieve this?’”.

Bell said that WFI’s focus on diverse and complex issues from the economy, to period poverty, to food, to unpaid caring, to wellbeing reflected the need to represent women’s voices on all aspects of policy.

“Women are 52 per cent of the population and we have some specific areas of interest.

“How do we make the daily experiences for women and their families better? This can only be a good thing for the whole of society.”

“WFI provides a non-judgemental, safe space to discuss issues – this is part of how we want to do politics differently in Scotland.”