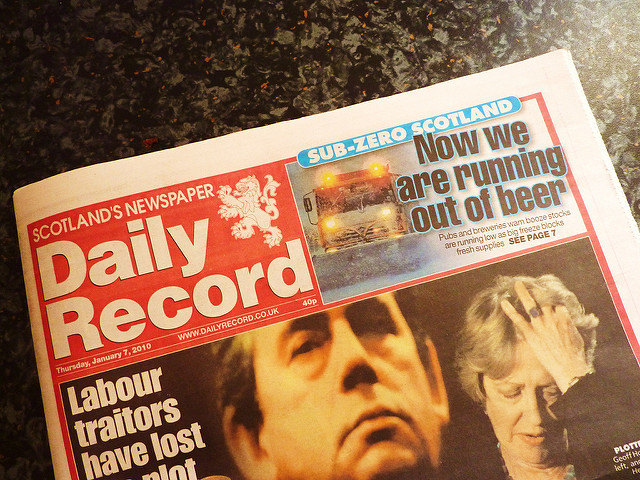 A BLOW has been dealt to the case for the union as the man behind the “vow” for more devolved powers in the final days of the referendum campaign admits that he now views independence as the only way forward.

Murray Foote, former editor of the Daily Record, commissioned the front-page promise made two days before the referendum by then Tory, Labour and Liberal Democrat leaders David Cameron, Ed Miliband and Nick Clegg to deliver more powers to Scotland after a No vote.

Today (14 June), Foote has written in The Times arguing that “independence it must be” – a position he has come to as a result of “a vindictive Westminster administration”, Brexit, and the Labour party’s failure to challenge it “in the knowledge that the people [Labour] professes to represent will shoulder the greatest burden”.

Foote explained that his vision for “the vow” was driven by his firm support for devolution and a belief that the Scottish Parliament could herald a more “progressive, dynamic, ambitious” future.

READ MORE: ‘Democratic outrage’: SNP MPs walk out of the House of Commons at #PMQs

The now-infamous front-page was regarded by many as playing a pivotal role in securing the success of the Better Together campaign, as Scots were told that “extensive new powers” for Holyrood would deliver “faster, safer, and better change” than independence.

Foote wrote in The Times: “Independence is now the only option that provides any prospect of that greater end. What matters is timing and circumstance.

“Over the past few years heavy negative forces — like Brexit, that parade of Tory chancers and a dysfunctional opposition at Westminster — have tugged the independence stars ever nearer alignment.

“For me, independence is about autonomy, allowing Scotland to meet success and failure on its own merit and not point an embittered finger of blame at anyone else.”

Foote said that he had reconciled himself to the fact that independence would bring both good and bad, and that he trusts in Scotland to “solve the problems that will come our way”.

He added: “The Yes-Yes campaign which brought our parliament back from the dead 20 years ago asked Scotland to take a leap of faith and to trust in ourselves. When we are next asked the independence question, I’ll strap on my work boots and take that leap.”

The change of heart has been welcomed by pro-independence politicians, with First Minister Nicola Sturgeon tweeting: “That [Murray Foote] – the architect of the ‘Vow’ – now supports independence is hugely significant. I’m delighted. Welcome aboard, Murray.”

Green MSP Ross Greer said: “The former Daily Record editor sums up the frustrations of many people in Scotland perfectly.

“Not only is Westminster aggressively overruling and ignoring our views and values in this so-called ‘union of equals’, we can clearly no longer wait for Labour to unite its ‘splintered movement’ into something capable of taking government and certainly not for the ‘mythical federal Britain’ promised by Gordon Brown and others.”

Following the SNP’s walk-out from the House of Commons on Wednesday, Foote tweeted that the fact that the house continued to “laugh uproariously at feeble jokes” during the event looks “appalling to many Scottish viewers” and “serves to confirm the SNP line that Scots interests are treated with disdain”.

Meanwhile, prominent Scottish historian Sir Tom Devine has responded to the EU Withdrawal Bill and the way it was forced through the House of Commons by stating that the idea the Union is based on partnership and respect is “fraud and myth”.