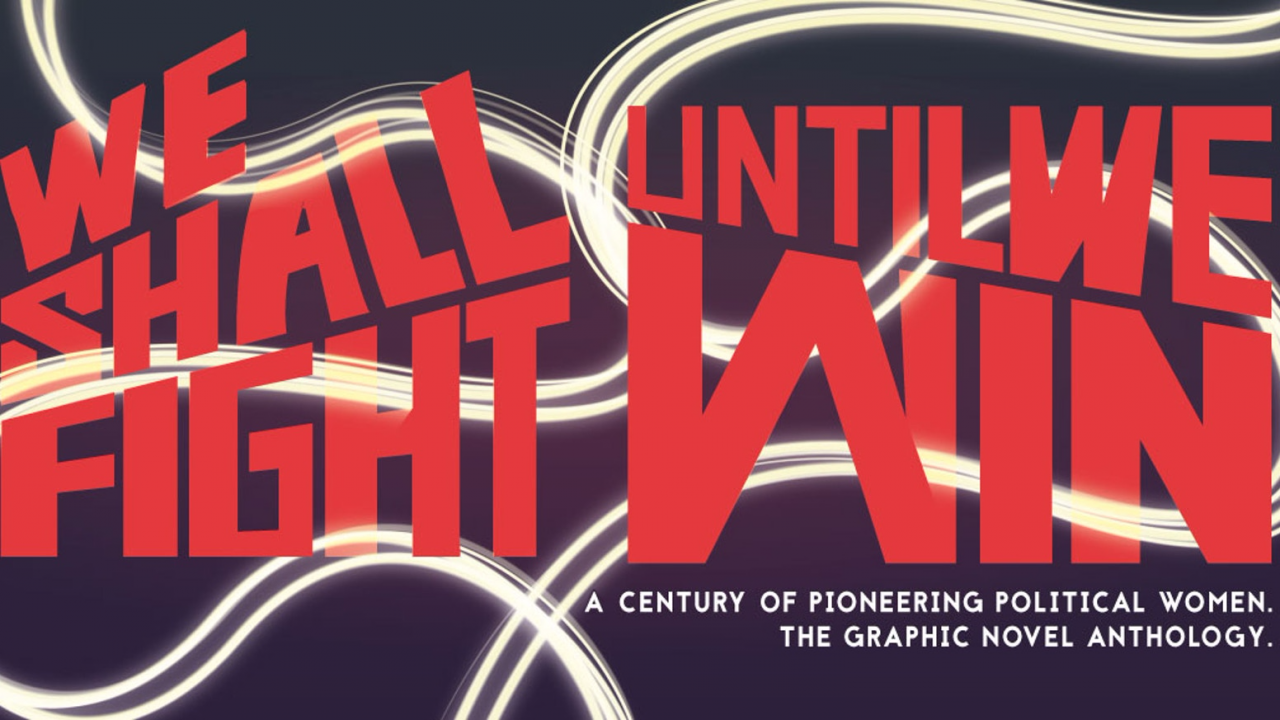 A NEW GRAPHIC novel created by women across the UK and published in collaboration between Scotland-based 404 Ink and BHP Comics will highlight pivotal achievements of women in public life since the first women were granted the right the vote in 1918.

Entitled We Shall Fight Until We Win, a Kickstarter crowdfunding campaign has been set up to fund the book’s publication.

The colourful graphic novel will put the spotlight on women who have paved the way and carved out a space for women in public life, from suffragettes such as Emmeline Pankhurst and Sophia Duleep Singh, to Nancy Astor, the first female MP, to Diane Abbot, the first black woman MP, to the women who are leading the way in politics and activism today.

“Only a handful of white women of the correct age bracket actually gained the right to vote in 1918.” Laura Jones, 404 Ink

In doing so, We Shall Fight Until We Win aims to illustrate the progress made towards women’s equality over the century and how much work remains to be done.

Speaking to CommonSpace, 404 Ink co-founder Laura Jones said: “For the centenary of the first wave of women gaining the right to vote in the UK, it’s the perfect time to look back on the last 100 years and the women who have helped pave the way towards (more) equal rights, in voting and beyond.

“It’s also a time to explore the stories of those who quietly promoted equal rights for women and may have been lost from history, through ignorance, whitewashing, bias – a number of reasons. We’re working closely with the creators of WSFUWW to bring some of those unheard stories to life alongside ones we’ll already know quite well.

“It’s going to be an interesting balance of popular and controversial figures, tackled by writers, artists and comics who will paint a triumphant but turbulent century for those who think they’re clued up and those looking to learn more.”

Explaining the thinking behind the graphic novel’s title, Jones explained: “We all know the ‘VOTES FOR WOMEN’ slogan well but when looking through the archives for powerful placards worldwide we found one emblazoned with ‘WE SHALL FIGHT UNTIL WE WIN’ that was used in the USA after 1918 but still held a message that the fight wasn’t over yet.

“Only a handful of white women of the correct age bracket actually gained the right to vote in 1918 and it was a long while before a fuller equality was reached and many are still seeking fair pay and rights today. It’s a message that can be read as relevant over the past century and, sadly, today is no different.”

READ MORE: Young women of Scotland celebrated in alternative “30 under 30”

404 Ink, which was established in 2016 by Laura Jones and Heather McDaid, publishes a literary magazine and has to date published several books including the acclaimed Nasty Women essay anthology, Chris McQueer’s short story collection Hings, and Lily Banning’s mystery novel, The Last Days of James Scythe.

However, this marks the first time the alternative publishers have ventured into the world of graphic novels.

“BHP Comics approached us in mid-2017 with the idea and we leapt at the chance,” Jones explained. “We’ve published books and succeeded in crowdfunding before, but never delved into graphic novels.

“We’re big fans of BHP and the work they do and think it’s a perfect fit ­- a project we certainly can’t pull off by ourselves. We don’t like publishing the same thing twice and collaborating keeps our list fresh and dynamic.”

BHP Comics is a Glasgow-based publisher which has published a varied selection of comic books, from established artists and writers such as Judge Dredd creators John Wagner and Alan Grant’s Rok of the Reds, through to new creators such as Clare Forrest with the Mighty Women of Science, and Gary Chudleigh and Tanya Robert’s award-winning Plagued: The Miranda Chronicles.

Sha Nazir, director of BHP Comics said he is also excited to see the results of a graphic novel which such a varied mix of contributors. “The list of creators we have compiled for this book between both publishers is very broad,” he said.

“Putting your money where you believe there is worth equates to spreading a message that might have otherwise remained within a small circle.” Laura Jones, 404 Ink

“We will have contributors who have never stepped into the comics medium before working with experienced comic creators and we expect that the results will bring a fresh, bold edge to WE SHALL FIGHT UNTIL WE WIN.”

Laura Jones emphasised the importance of the Kickstarter to the project’s success. She said: “Our first book was funded via Kickstarter in January 2017 – Nasty Women needed £6,000 to be published, and in the end we raised over £22,000 thanks to a raft of eager supporters throughout the world.

“The importance of Kickstarter cannot be understated for small publishers like ourselves. Bigger projects become more viable, allowing us to pay a vast array of contributors which we otherwise couldn’t pay, we can print more, spread the word further and generally make a bigger splash.”

She continued: “Not only this, publicly putting your money where you believe there is worth equates to spreading a message that might have otherwise remained within a small circle. This is crucial for grassroots movements, political agendas and dissemination alike.

“We’re a small publisher with big mouths and Kickstarter is our megaphone to rally those who support our publications and hopefully attract those who are yet to hear about us and our books.”

With the We Shall Fight Until We Win crowdfunder, the publishers will offer reward tiers allowing backers to purchase copies for organisations, libraries and schools to be donated on their behalf.

In its first day, the Kickstarter has raised over £2,000, taking the fundraiser over a quarter of the way to its £8,000 goal, working towards a publication date of June 2018.