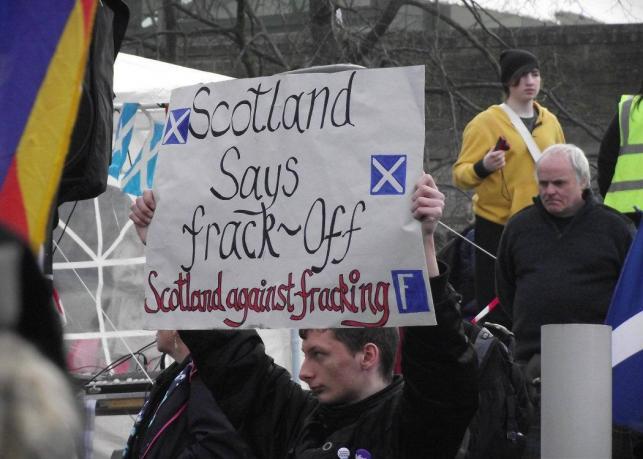 OUR FORTH, a campaign against unconventional gas extraction based in the areas around the Firth of Forth, has called out petrochemicals giant Ineos for its plans to legally challenge the Scottish Government’s effective ban on fracking, saying the attempt will primarily be used to support the company’s case in England.

Last week, Ineos, which owns the fossil fuel facility at Grangemouth, revealed that it had set in motion a legal challenge to the government’s decision on fracking – a form of unconventional gas extraction – which amounts to an indefinite moratorium.

Tom Pickering, operations director at Ineos Shale explained: “The decision in October was a major blow to Scottish science and its engineering industry, as well as being financially costly to Ineos, other businesses and indeed the nation as a whole.

“It also removed at a stroke the potential for the country in these uncertain times to secure its own indigenous energy supply. We have serious concerns about the legitimacy of the ban and have therefore applied to the court to ask that it review the competency of the decision to introduce it.”

Our Forth, which campaigned for a ban in Scotland and continue to support efforts to ban fracking elsewhere, has released a statement linking the move by Ineos to its wider strategy across the UK.

The statement reads: “Ineos has gained an injunction in the English courts, which attempts to curtail opposition to its fracking activities south of the border.

“The Scottish moratorium provided inspiration for campaigners in England and we believe that despite the remote chance of a successful challenge to the Scottish Government, Ineos is challenging the moratorium in order to argue in England that the evidence against fracking that underlies the Scottish ban is flawed and can be challenged.

“Our Forth stands in solidarity with campaigners in England and internationally and continues to campaign for an end to massive imports of fracked gas from the US that are being shipped up the Forth to Grangemouth every week.”

Describing Ineos’ efforts as “an insult to democracy”, Our Forth said: “The Scottish taxpayer will have to meet the bill for legal defense.

“Our Forth is confident that Ineos will fail but we believe the drawn out legal process that will result from the legal challenge is a gross waste of public time and money.”

Ineos has lobbied both the Scottish and UK Governments on fracking, and continues to enjoy the support of the Tory Government and Scottish Conservatives, despite otherwise cross-party opposition.

READ MORE: Mark Lyon: We need an inquiry into what happened at the Ineos Grangemouth plant in 2013

The legal challenge sparked outrage when it was revealed last week, with Mary Church, head of campaigns for Friends of the Earth Scotland saying the decision “reeks of desperation”.

Church also linked the development to the corporation’s efforts in England: “Sadly, given the company’s tactics south of the border it’s little surprise that Ineos is taking this course of action. Ineos is no doubt taking this challenge to keep alive their hope of ever making any money out of this toxic industry.”

99 per cent of responses to the Scottish Government’s recent consultation opposed the use of fracking in Scotland.

Ineos did not respond to a request for comment by the time of publication.