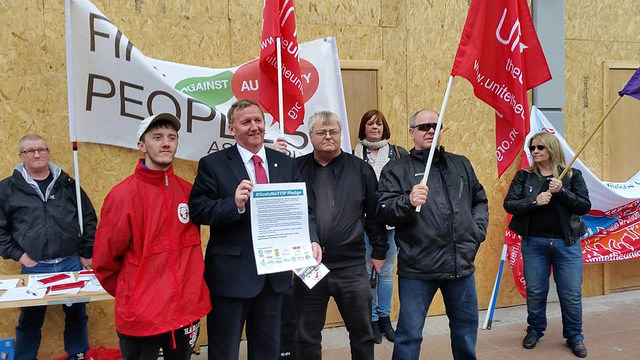 ALEX ROWLEY has stepped down from his role as interim Scottish Labour leader following allegations made in The Sun by a former partner on Tuesday, who said he had been emotionally abusive and sent her threatening text messages.

The Mid Scotland and Fife MSP and deputy leader of the party, who has been acting leader since Kezia Dugdale stood down in August, has denied the claims.

Rowley said in a statement: “I totally refute these allegations and will take all steps necessary to clear my name.

“These allegations must be properly and thoroughly investigated in line with our party’s procedures – and I will refer myself to the party so such an investigation can take place.

“While that investigation is carried out, I will step aside as deputy leader, as well as interim leader, of the Scottish Labour party.”

A Scottish Labour spokesperson confirmed: “Alex Rowley has stood aside as Interim and Deputy Leader of Scottish Labour and referred himself to the party’s internal complaints procedure regarding allegations made against him.”

The woman, who asked to remain anonymous, told The Sun that she chose to come forward now due other reports of harassment at Holyrood and Westminster.

Earlier this month, SNP MSP Mark McDonald resigned as minister for childcare and early years due to past “inappropriate” behaviour.

The news comes as the Scottish Labour leadership contest draws to a close, with either Anas Sarwar or Richard Leanard to be announced as the new party leader on Saturday.