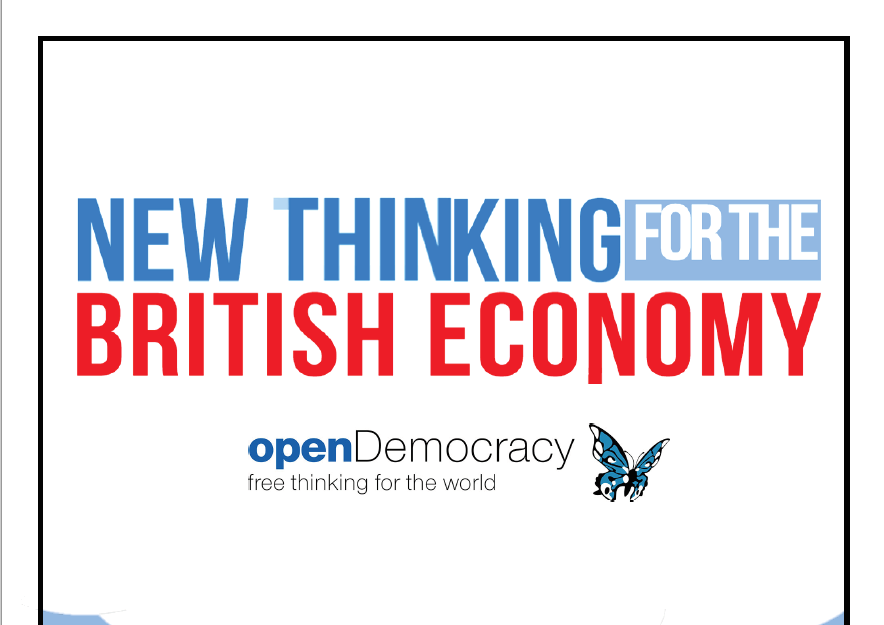 THE ECONOMIC and political orthodoxies of the West are in upheaval, and the age of neoliberalism may be over. This is backdrop to Open Democracy’s new essay collection New Thinking for the British Economy, published this week and edited by economist Laurie Macfarlane.

The still-reverberating financial crisis of a decade ago has not only produced a range of unexpected outbursts of international political populism on both the Left and the Right, but in Macfarlane’s view has triggered a reappraisal throughout the economics profession of what were only their most dearly held beliefs, along with an acknowledgement of “the shortcomings of orthodox economic ideas.”

“I think it’s now becoming pretty widely recognised – not just on the Left, but among mainstream institutions like the IMF – that for neoliberalism, the game is almost up,” Macfarlane tells CommonSpace. This has manifested “through a number of social and political crises.”

“In the UK context, that’s fed into lots of different things – the independence referendum and the rise of the SNP, Brexit, the rise of Jeremy Corbyn in the Labour Party… I don’t think [pointing that out] is particularly controversial. Where we’re at now is that it’s generally acknowledged that we need to do something different. On the Left, there’s quite a lot of good ideas, but what’s really lacking is more detailed thinking about transitioning from a critique to a policy program.

Explaining the genesis of the new collection (an excerpt from which was published on CommonSpace yesterday), Macfarlane says: “What we were trying to do with this book is synthesise some of the best thinking out there, across a host of important policy areas. Crucially, we weren’t just looking at the traditional levers of economic policy – trade, finance, industrial policy, although we do look at all those as well. We [also] took a broader approach and asked what are the forces that shape the power dynamics and political economy of the UK today. So, we looked at things like racial inequality, media reform, constitutional issues, our care systems… A broader look than what you might typically get.

“We were asking what is the emerging consensus on what a post-neoliberal economy looks like – a diagnosis of what the problems are today, what the vision for change is, what policies we need to get there, and crucially, some strategic thinking about how we get from here to there. What are the critical paths for the first 100 days of an incoming government? We all know neoliberalism is bust, but then how do we move the conversation forward?”

“There’s isn’t anything that was in Labour’s 2017 manifesto that isn’t already in place in Germany, the capitalist powerhouse of Europe.” Economist Laurie Macfarlane

Speaking to CommonSpace during our retrospective on the impact of the 2008 financial crisis on the international Left, the political journalist Jamie Maxwell emphasised the distinction between opposition to neoliberalism and opposition to capitalism itself. To what extent is crossover between these two camps potentially fruitful, or will it be a source of future division among those seeking economic and political reform?

“It depends who is in each camp,” Macfarlane answers. “I suppose what you might call the post-neoliberal camp is quite a broad church, ranging from social democrats looking to update social democracy for the 21st century, to democratic socialists – and it’s interesting that in the US you have a rise in people using that term – and Corbyn’s Labour party, etc. And then obviously you’ve got the more radical Left beyond that, which would be the more anti-capitalist camp.”

Macfarlane notes that, despite the media hype, many contemporary ‘radical’ phenomena are distinctly moderate in terms of policy: “It’s interesting for me that a lot of the rhetoric of the democratic socialist wings – whether it be Bernie Sanders in the US or Corbyn in the UK – are proposing, in terms of policy, just social democracy. There’s isn’t anything that was in Labour’s 2017 manifesto that isn’t already in place in Germany, the capitalist powerhouse of Europe. But as a minimum, there’s a broad base of support galvanised by these movements – in England, Scotland, Europe, North America – that we need to be moving towards a more radical form of social democracy. If and when there is a power shift towards that, there may be more debates within the movement on the finer details.”

Despite what Macfarlane describes as a growing anti-neoliberal consensus, governments and economics departments the world over are still staffed with those who were raised in the era of Milton Friedman, who may be somewhat more resistant to a post-neoliberal world than the mass movements now engaged in the intellectual work Macfarlane describes. How might such an establishment be overcome?

“There is an issue which comes back to implementation – if you just look in the UK context, the Bank of England, the Treasury and other branches of government are stuffed with economists that have gone through an education and a career where neoclassical, neoliberal economics is their bread and butter. And that’s a real issue when it comes to effecting change – the resistance you’ll encounter from these civil service/public bodies who actually have quite a lot of power.

“For example, the permanent secretaries in the Treasury can push back against policies on the basis of things like value for money, using a very narrow set of tools to justify that. So there’s a much wider project of thinking the state as well – institutional change, personnel change, cultural change. It’s not just a case of getting the right ideas and pushing a button.

“If the NHS, when it was proposed in 1945, was subject to all of the analyses and financial metrics the Treasury departments demand today, it probably would never have passed.” Economist Laurie Macfarlane

“The other thing is that governments have,” Macfarlane continues, “is the consultants they go to when they get difficult questions, who will then advise them based on the orthodoxy of the past 30 years. And part of the problem is, because what we’re talking about is new and there haven’t really been anyone doing this in power, there’s a lack of experience of people of the Left generally of getting things done in government.

“One thing that’s interesting at the moment is that, even among reasonably mainstream economic institutions, there has been a reasonable intellectual shift that’s taken place. It’s not particularly radical, but national governments haven’t really caught up with it. For example, you now have institutions like the World Bank and the IMF saying that governments need to reduce inequality, which is in stark contrast to what was said before.”

But again, Macfarlane argues that we will need to re-examine “how policy is appraised and whether policies have been successful. If the NHS, when it was proposed in 1945, was subject to all of the analyses and financial metrics the Treasury departments demand today, it probably would never have passed.

“We need to think the toolkit, the culture of public bodies more generally, to enable a different kind of political economy.”

The eBook version of New Thinking for the British Economy can be downloaded for free here. Printed versions of each chapter are also available for £1 via Commonwealth Publishing and the Democracy Collaborative. If you would like to order physical copies, and inquire about organising author events, please contact Dan Hind or visit the Commonwealth Publishing website – www.commonwealth-publishing.com