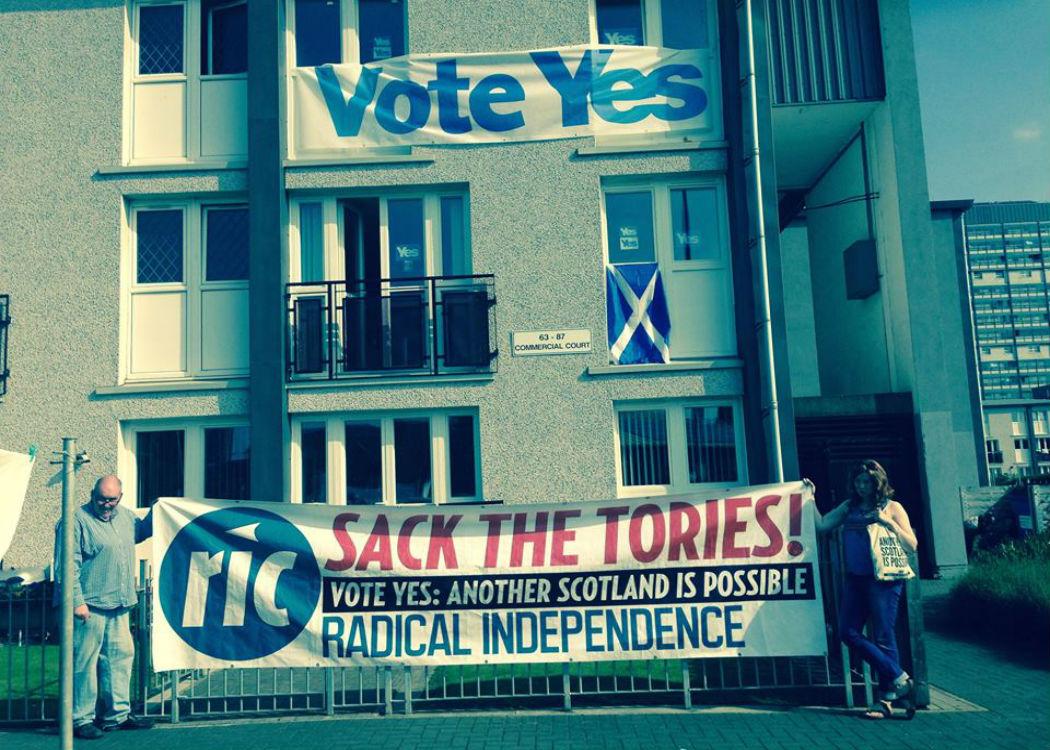 Ahead of the Radical Independence conference in Edinburgh, CommonSpace speaks to local historian Allan Armstrong about how the campaign fits into the history of the Scottish left

“THE LAST TIME the left did something as significant was the anti-poll tax federation,” says Allan Armstrong.

The Edinburgh based local historian is a veteran of the anti-poll tax movement, which fatally wounded Margaret Thatcher’s hated flat-tax policy in 1990.

“The anti-poll tax campaign had greater mobilising power and penetration, particularly in the cities. It had for example, I believe, 36 very active local groups in Lothian, some meeting ever week. So that had a very high level of participation.”

The author of several books focusing on the relationship between the socialist movement and the UK’s various national questions thinks that the anti-poll tax struggle, which engendered great anger in Scotland when it was imposed ahead of implementation across the UK, was a seminal moment in the association of left wing politics with the case for Scottish independence.

The Radical Independence Campaign (Ric) which was established 20 years later in 2012 to fight for an egalitarian independent Scotland was the next crucial moment in the this development says Armstrong, one that took place “on a higher level” ideologically.

Ric is about to hold its fourth annual conference in Edinburgh , which is set to debate alternatives to parliamentary politics .

Many of the leading figures of Ric have gone on to foud the Rise electoral coalition , the only new parliamentary vehicle to emerge from the broad Yes movement.

“Ric’s role in Scotland’s ‘democratic revolution’ where 97 per cent of people were registered to vote, there have been attempts to write the scale of that out of history. But Ric played an important role in that, shown by a poll that found the number of people associating as ‘far left’ was higher in Scotland than in the UK by the end of the campaign.”

“Since the poll tax, more and more of the socialist left has associated with the cause of Scottish independence. If you think about the Scottish Socialist Party for instance emerged through stages from the Militant, which had been well known for its unionism.

“I would now say 90 per cent of the left associate with independence and a desire to break-up the UK. That’s an historical process of which Ric was very much a part, particularly after the realitive decline of the SSP.”

Some of Ric’s set piece campaigning efforts also represented a new relevance for leftist ideas. The campaign’s ‘mass canvasses’ were “effectively adopted by Yes Scotland” as the campaign wore on. Ric’s climactic November 2014 conference attracted 3000 supporters to the Clyde auditorium.

“I can’t think of any conference of the radical left of that size in Scotland,” Armstrong says.

“In the high point of the socialist movement between 1918 and 1921 there were some very large indoor gatherings. But certainly since the Second World War I can’t think of a similar event. Indoor rallies of that size are quite rare for political movements. For it to be replicated for a UK wide event, by head of population that would be an indoor rally of around 30,000.”

“I would now say 90 per cent of the left associate with independence and a desire to break-up the UK.” Allan Armstrong

Another vital element of Ric, and one which represented its ideological maturity according to Armstrong, was its international scope in a campaign that was supposed by its opponents to be fixated on nationalism.

Armstrong says: “People were invited from England, Wales, the whole of Ireland, from Catalunya, the Basque country, Greece and Qubec and elsewhere. Ric was a very international campaign and it was internationalist in tone. That’s something that marked it out from the official Yes campaign. It therefore represented an internationalist tradition rather than a Scottish nationalist one.”

Armstrong traces a tradition of pro-independence Scottish socialism back at least as far as the pioneering Marxism of Glasgow based John Maclean in the early 20 th century.

According to Armstrong, who is researching the iconic anti-war campaigner for a forthcoming book, Malean adopted his support for Scottish independence, partially in response to events in Ireland, at the height of the Europe wide revolutionary wave that struck Europe in response to the First World War.

Ric conference in the Clyde Auditorium in 2014

The retreat of that revolutionary wave from 1923 and the partition of Ireland politically isolated Maclean and his pro-independence position.

Whatever the controversies of this picture of ideological developments in the history of the Scottish socialist movement (and on this topic, all history is controversial) Armstrong’s assertion that the pro-independence position remained dormant through the UK’s boom years following the Second World War is incontestable.

The end of the boom and the post-war welfare consensus, which saw the construction of the NHS and much of the modern welfare state, was also the end of unionisim’s heyday on the left.

“The fact that the Labour party and Tony Blair did as much to unwind the post-war consensus as anybody really undermined left unionism.” Allan Armstrong

“The fact that the Labour party and Tony Blair did as much to unwind the post-war consensus as anybody really undermined left unionism. The collapse of the British Empire also had an impact of course, the union was designed as a fundamentally imperial project, and the loss of empire in the post war years struck an enormous blow to British identity,” Armstrong says.

Is there any likelyhood of the radical left moving away from a pro-independence position in coming years? The left is experiencing a resurgence in the Labour party behind new leader Jeremy Corbyn.

“If there are two broad scenarios, Scottish independence on the one hand and on the other, in a last hurrah for left unionism – a Corbyn led government – I don’t think that’s particularly likely to happen. There is no Corbyn bounce in Scotland. I think that indicates that people will remain committed to a strategy that leads to the break-up of Britain.”

Allan Armstrong is the author of several books including ‘From Davitt to Connolly’ and ‘The Ghost of James Connolly: James Connolly and Edinburgh’s new Trade Union’. He recently contributed an essay for a new colection ‘ Scotland and the Easter Rising ‘.