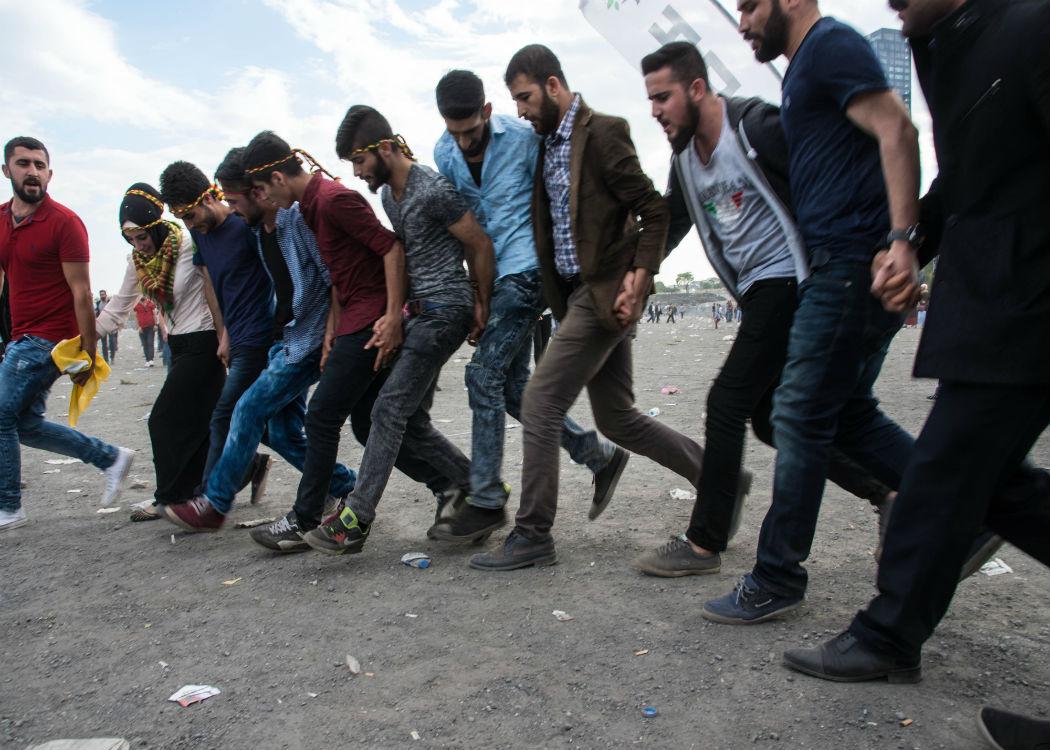 A Scottish delegation of trade unionists and human rights activists has returned from Kurdish areas racked by bombings, political repression and a refugee crisis

“Kurdistan could be one of the 21st century’s greatest triumphs, or worst tragedies,” says Sarah Collins, a Unison activist just returned from Kurdish areas in the South of Turkey.

A delegation of Scottish trade unionists and human rights activists, including Collins and Roza Salih, a Kurdish Scot from Northern Iraq and one of the famous ‘Glasgow Girls’, have just returned from Diyarbakir.

The city is a centre of the Kurdish population in Turkey and a city with a long history of violent confrontations between the Turkish state and Kurds. They returned in time to miss the latest bloody escalation in Ankara, and found in Diyarbakir a city under curfew and loaded with police and soldiers, but also a mood of defiance among the Kurdish population.

“I spoke to a woman my age, her name was Lisa, she lost both of her legs in a bomb blast carried out by the Turkish state.” Roza Salih

The escalating violence in Kurdistan, has seen fighting between so-called Islamic State and Kurdish militants, and in recent months a deterioration in relations between the Turkish state and its Kurdish population which has been punctuated by a series of mysterious explosions at pro-Kurdish political events.

On Saturday 10 October a bomb blast at a demonstration in Ankara killed around 100 leftists and Kurds, including activists in the HDP; a leftist and pro-Kurd political party, demonstrating against the Turkish state and its aggression in Kurdish areas.

Salih maintains the HDP analysis that the Turkish state has a hand in the bombings. Speaking about a bomb blast at a rally in Diyarbakir before the Ankara attack, she tells CommonSpace: “I spoke to a woman my age, her name was Lisa [pictured], she lost both of her legs in a bomb blast carried out by the Turkish state, she is a supporter of the HDP. Many people have lost arms and legs, 400 people were injured in the attack.”

“The police claim they do not know who carried out the attack. It was targeted at the Kurdish people, so it is clear what is happening but the Turkish government will never admit this,” she says.

The Turkish State has angrily denied the accusations and blamed the bombings on Islamic State, but with a long and ongoing history of Turkish military attacks on the Kurdish community, Kurds are unlikely to heed those denials.

On Sunday 11 October the Turkish air force heavily bombed Kurdish areas throughout Turkey and Northern Iraq, despite a unilateral ceasefire announced by the Kurdistan Workers Party (PKK), the strongest Kurdish faction in Southern Turkey which has engaged in a long guerrilla war with successive Turkish governments.

The election of 80 HDP parliamentarians in June 2015 was a turning point, Collins told me, but it has summoned an unprecedented crackdown by the Turkish state: “HDP parliamentarians have been arrested, Kurdish areas are under military curfew. Strikes are banned. The doors of trade union offices are being kicked in and trade unionists arrested.”

The Kurds are the fourth largest ethnic group in the Middle East, and the oldest stateless people in the region. The area and population of Kurdistan stretches over a huge area and into Turkey, Iraq, Syria and Iran. Its encasement within four powerful regional actors has marked the history of its movement for national self-determination with grim frustration and terrible violence.

Today it lies at the centre of most of the main crises afflicting the whole region. It battles for autonomy amid the collapse of the sectarian regimes in Baghdad and Damascus, it fights for democracy and survival against Islamic State, and on the behalf of other persecuted minorities like the Yazidis. Kurdistan is riddled with refugees, Kurds, Christians and Arabs alike.

And yet amid this turmoil the Kurds have established perhaps the greatest degree of autonomy they have ever experienced in the modern era. The fight for survival has wrought a fragile degree of freedom.

Throughout much of northern Iraq and the west of Syria the Kurds are functionally independent today, if still threatened by their enemies.

“HDP parliamentarians have been arrested, Kurdish areas are under military curfew. Strikes are banned. The doors of trade union offices are being kicked in and trade unionists arrested.” Sarah Collins

Collins says that this situation brings hope not only to the Kurds but to the whole region: “If you were following events through the western media alone you would think that the whole region is just a bloody mess and there is nothing to be done about it.

“But the Kurdish struggle represents hope. In Rojava the Kurds are establishing new forms of self-rule including direct democracy and organised gender equality. Consider the powerful contrast that makes to Islamic State.”

“Scottish trade unionists and activists have a responsibility to defend the Kurdish people’s rights and the rights of trade unionists. But we also have a duty to learn and tell people about what they are doing, how they are surviving and what they are creating in areas with autonomy.”

Salih agrees that the example of Rojava is important: “There is a democratic society now which has been set up by the Kurdish people, and this is the way forward for prosperity for the whole region. It is hope that has been established in Rojava,” she says.

But she stresses that the Kurds are isolated and in danger: “The Kurdish people need help, and they are not being supported by the international community and they cannot continue. They have been fighting, they have been leading at the forefront this struggle and it is depressing to me as a Kurd to see not many people talking about it.”

“There is a democratic society now which has been set up by the Kurdish people, and this is the way forward for prosperity for the whole region.” Roza Salih

Salih says that understanding the plight of the Kurds and their attempt to establish a new society also relates to the refugee crisis which has obsessed Europe’s governments and media in recent months: “I’m sure that you have heard that Alan Kurdi, the boy that was drowned and everyone over here sympathised with him, he was actually a Kurd.

Salih and Collins, who have helped to establish Scottish Solidarity with Kurdistan seem only contactable through rallies and organising meetings, such is their commitment to establishing new links between the Kurdish and Turkish left and activists in Scotland. It’s hard to imagine their commitment or their anger wavering.

But will they be successful in their ambition that the pain and the triumph of the Kurdish people be better known in Scotland? Much depends on their own efforts and more still on whether the Kurds can hold on to the precarious advances they have made.