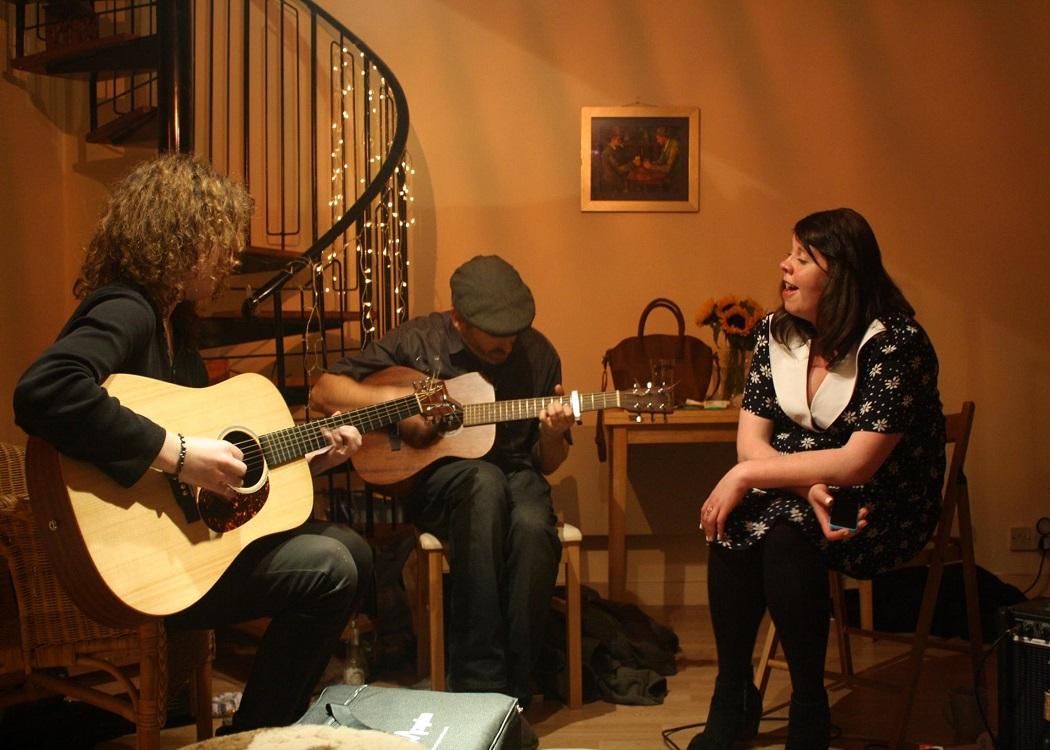 GLASGOW’S premier sea shanty ‘speed-folk’ collective the Trongate Rum Riots are nothing if not theatrical.

One of the city’s most exciting live bands, the Rum Riots incorporate more styles and influences into their energetic sets than you could list off the cuff.

What do you guys do in the band?

Darren: I write songs and sing/shout them.

How many members are in the band in total?

Darren: Currently there’s eight, sometimes there’s nine. We don’t really see that as unusual, especially when you think of massive bands like Colonel Mustard. There are so many talented folk in Glasgow and everyone knows each other, so there’s constant collaboration between artists.

So, do you take a ‘the more the merrier’ approach?

Sinead: We had an additional percussionist for the last gig we played in George Square, that Winter Nights thing.

Darren: We’ve got a core sound and core members, but as Sinead says, sometimes there’s more. We started off in a few different Glasgow bands. I used to work at The Bay music venue where we used to jam with the house bands. That’s where the sea shanty thing came from, actually.

What about the song writing? How collaborative is it?

Darren: Very much so. We all do our wee bit. Usually, someone will have a song and all our different parts fit around it.

I know it’s difficult due to the various styles you attempt, but how would you broadly describe your sound?

Darren: Yeah, there is also a punky element to our music. We just try to play as fast as we can most the time! If we could play faster, we would. What could you call it, really? Speed-folk-blues? It’s ever-changing.

I assume The Pogues are a big influence?

Darren: Yes, of course. As a youngster, I remember being very into folk music first and foremost. My mum used to take me around these castles where I’d buy Corries tapes and real Jacobite tunes, then I moved towards The Pogues and The Dubliners a bit later.

I loved the rawness of that type of sound. When we started, we were really surrounded by folk musicians that played that style.

Did you guys meet in trad/folk circles then?

Darren: Not really. It was more that word got around parties that we were jamming sea shanties. That’s how Kev and Eamon, our mandolin and whistle players, first joined and we’ve poached musicians from the best Glasgow bands since then.

When it comes to these sea shanties, what are the main themes you tend to write about?

Craig: It’s one of the things I was attracted to when I first saw the Rum Riots play, actually [Craig is the most recent recruit to the band]. Nobody else was doing what they were doing, expanding on that traditional sound and doing something new with it.

Are there any other contemporary bands in Glasgow performing sea shanties?

Craig: There’s a few that have started up in the past few months, which is amazing to see. I’m not sure if they’re explicit about the sea shanty thing, though.

Sinead: Our sound is a little bit more all over the place than other acts in Glasgow, too. We have a lot of blues influences and Balkans folk sounds. You’ll notice a lot of different elements in a single live set.

We love the exotic feel of Flamenco and things like that as well. I like really old folk music, though; I often try to surmise what the Romans would have listened to [laughs]. They must have picked up a few interesting instruments from all their conquests.

Sinead: Well, they had to compliment the mood somehow. Maybe they did it with wine and crazy folk music.

So how do you approach your live shows? I’m assuming it’s all quite carefree and fun?

Darren: Well, we don’t really concentrate on making mistakes and so on. We just follow the vibe of the night.

Craig: We want you to dance, have a good time.

I can imagine it’s quite a packed stage with all those members. How do you reconcile the inevitable differences in musical taste in a band that size?

Darren: We’re open minded. Everyone has input. I mean, if one of us brings in a death metal tune we’ll probably just laugh at them, but we’d still give it a go [laughs].

You have a debut album coming out soon. Tell us more about that.

Darren: The album is four years in the making and it’s finally on the way. We were too busy hammering through festivals last summer to get everything finished.

Do you have a name for it?

Sinead: Well, I do. The working title is ‘Wrecked but Not Lost’, but we’re going to put it to a vote.

Darren: That’s democracy for you.

Next on Common Space Music: Live reviews featuring: The Trongate Rum Riots, Monogram and A Mote of Dust.

Picture courtesy of the Trongate Rum Riots on Facebook