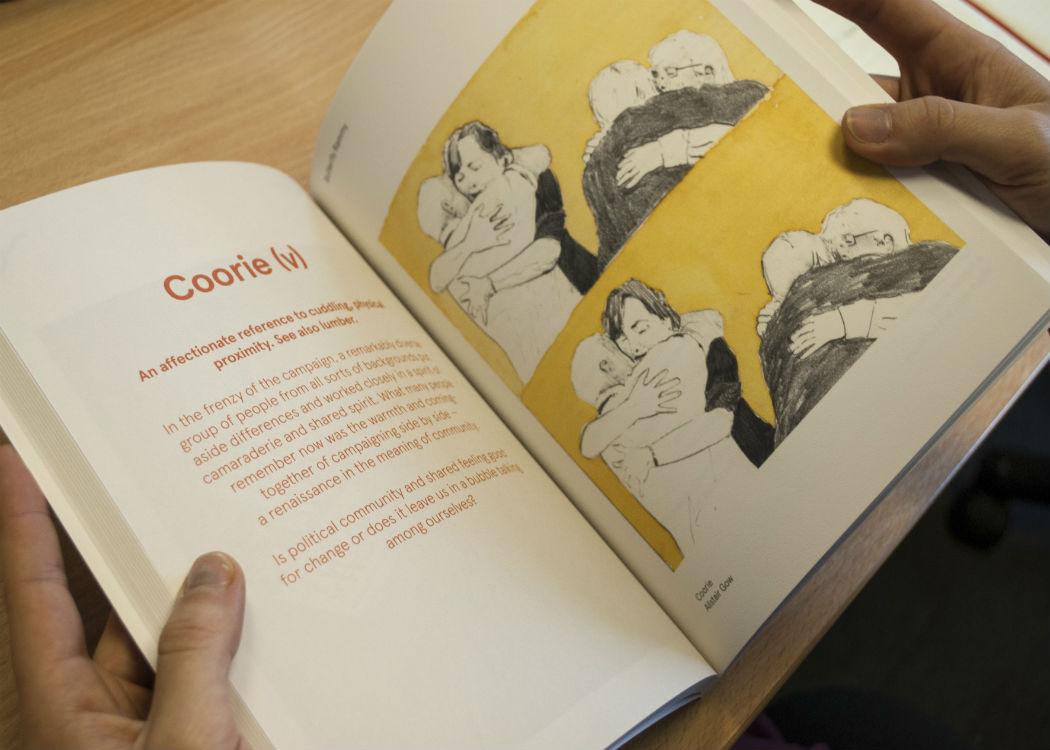 COMMONSPACE asks Robin McAlpine about culture and the referendum, Scots, and the future of artistic dissent

COMMON WEAL has just launched Butterfly Rammy, a cultural project involving writing, photography, design, and spoken word and comprised of a book, a script and a series of interactive shows over the course of the Edinburgh festival fringe, starting Friday 7 August (with a preview in Glasgow on Thursday).

CommonSpace journalist David Jamieson spoke to director of the Common Weal, Robin McAlpine, about how the project fits into the wider role of culture in the independence campaign and beyond, the use of Scots and whether Butterfly Rammy will leave a legacy.

1. So what is a Butterfly Rammy?

We’re using it as a metaphor for the independence campaign. Those who know the campaign well know that an enormous amount of it was put together with the equivalent of sticky tape and old bottle tops, just groups of local people who wanted to do something. There has always been an attempt by opponents of independence to present the campaign as a big, lumbering, centralised and crucially dehumanised thing. It was nothing of the sort. If you looked at any individual bit of the campaign it seemed remarkably small and fragile, people scraping money together from their own pockets to rent a hall and print some flyers. But it was incredibly, wonderfully vibrant and chaotic. The idea of lots of specs of bright colour in a giant messy whirl was what led us to the name.

2. Why is it important we explore these issues now, a year after the referendum? Is the cultural, emotional and aesthetic memory of the independence referendum a legitimate battleground?

The Yes movement has been in a very strange position. It’s like the operation failed but the patient didn’t die – in fact quite the opposite. So we’ve been in this position where we haven’t had an autopsy because we didn’t have a dead body – and performing an autopsy on the living is a tricky business. I’ve been rattling on about this pretty well since 19 September last year but clever campaigns look carefully and honestly at why they didn’t win to learn for the future and if we don’t do the same then we won’t learn. Or worse still, like the Blairites who think they lost the General Election because they weren’t Tory enough, we’ll learn the wrong lessons. Looking at what happened through art, poetry and music is a start which people shouldn’t find threatening and I personally hope it will encourage people individually to think back a bit on what happened. Plus for many of us it was a wonderful, exciting time and I certainly want to celebrate that.

3. There were those who saw cultural efforts by the likes of National Collective as a sort of bauble attached to an SNP or Yes Scotland machine – which was the real powerhouse. Isn’t this a fair impression?

At a very conservative estimate I think that the whole non-party Yes campaign (the RICs and WfIs and National Collectives and Common Weals) added five per cent to the Yes vote. They formed themselves largely because the main campaign was not seen as exciting or inspiring, particularly so in the early days. The powerhouse of the Yes campaign was local and organised autonomously. It was in part because the centre of the campaign was weaker that the movement as a whole became stronger. So if you focus on that five per cent extra Yes vote for a minute, you’ll realise that without it we’d have lost 60-40. I think that really would have been enough to kill independence for a generation. Far from being a bauble, in large part I think independence is only still a live issue in Scotland because of groups like National Collective.

4. Butterfly Rammy focuses on Scots language and the feelings and memories people attach to language. What is the political meaning of Scots today? Is there one? Is it about resurrecting our past or embracing our present? Is it our language at all?

Language is always a battleground and big power and big money always want to control it. The whole idea of Scotland actually having a culture was genuinely challenged by some No campaigners. The Edinburgh chattering classes are utterly convinced that every Scot alive is utterly embarrassed by the film Braveheart and have transformed the word into a put down for any sign of sentiment towards Scotland. Which is weird because Braveheart is a perfectly serviceable, above average Hollywood blockbuster and bluntly almost all of the Scots I know enjoyed the film and felt no embarrassment whatsoever.

The tales of the mild but everyday suppression of Scots language in schools, court rooms, public life and so on are well known to all. If the quiet and thoughtful Alasdair Gray raises a perfectly reasonable question about whether we should aspire to more Scots being able to take leadership jobs in Scotland he is monstered by all our wealthy elite. Language and identity are always a complex battleground where social class, national identity, the power elites and political expediency clash in a constant battle for the soul. Thankfully, out in the real world no-one really gives a monkeys and they tend to speak however they speak. There are a lot more people buying tickets for Still Game and Kevin Bridges than there are queueing up for another lecture from the well-spoken, patrician Alastair Darling.

5. How important is culture and art for social movements? Does the left have a good record of using cultural expression to spread its politics?

There has long been a close relationship between art and radical politics. With some notable exceptions, you don’t get all that many right wing artists. I’ve always believed that this is because artists seek to gaze into the soul of a person and our society and when you do that you seldom conclude that we’d be better off being more servile, greedier, more selfish, more violent or crueller. But I think the fine line between art showing you something and art telling you something was probably crossed in the Thatcher years and when it tipped into propaganda, the left got embarrassed of its artists (Blair seemed only to like culture in direct proportion to how much it sold for).

This was a mistake. Art helps us to think and understand. It is part of a sort of ecosystem along with ideas and analysis and debate which helps people challenge what they thought they thought. I am incredibly personally committed to bring art and ideas into proximity with politics and governance. One of the first things Common Weal did was hire a graphic designer (the fabulous Adam Turner who did all the visual ID for Butterfly Rammy), strengthen our relationship with the brilliant team at Tangent (who designed our logo, website and first book) and set up a network of sympathetic artists. Personally, I couldn’t do politics and policy if it was just numbers all the time. I need something that makes me laugh and cry too, to feel what I’m doing and not just to calculate it.

6. So what comes out of the Rammy in the end? Don’t people all go home after these sorts of things, having had a bit of enjoyment, and forget about it?

One of my favourite quotes is from Milan Kundera: “The battle of people against power is the battle of memory against forgetting”. I could go on for hours about the ways I’ve noticed the mainstream media and commentators trying to ‘move on’ from the referendum, downplay what happened, wrap its wonderful complexity up into the simplistic language of party politics.

Think about this for a second – if it wasn’t for Jack Foster and Chris Silver’s efforts to properly follow and document the Yes campaign in Scotland Yet , there wouldn’t be a single film which actually recorded what happened in Scotland during 2013 and 2014. I doubt the BBC holds many minutes of footage of the grassroots campaign – and in their twisted logic appear to have just as many minutes of footage of the fake Better Together grassroots.

The aftermath of the referendum was always going to mean a fragmenting of the movement as the day-to-day realities of party politics and our lives (which lots of people suspended for a year) returned. But if we forget what really happened, if we forget how it felt to be part of that campaign, to work together, then they will win. I don’t think it will happen. I still believe that this is one of those rare moments in history where, in the battle of people against power, the people will win.

To find out more about Butterfly Rammy go to the facebook page.