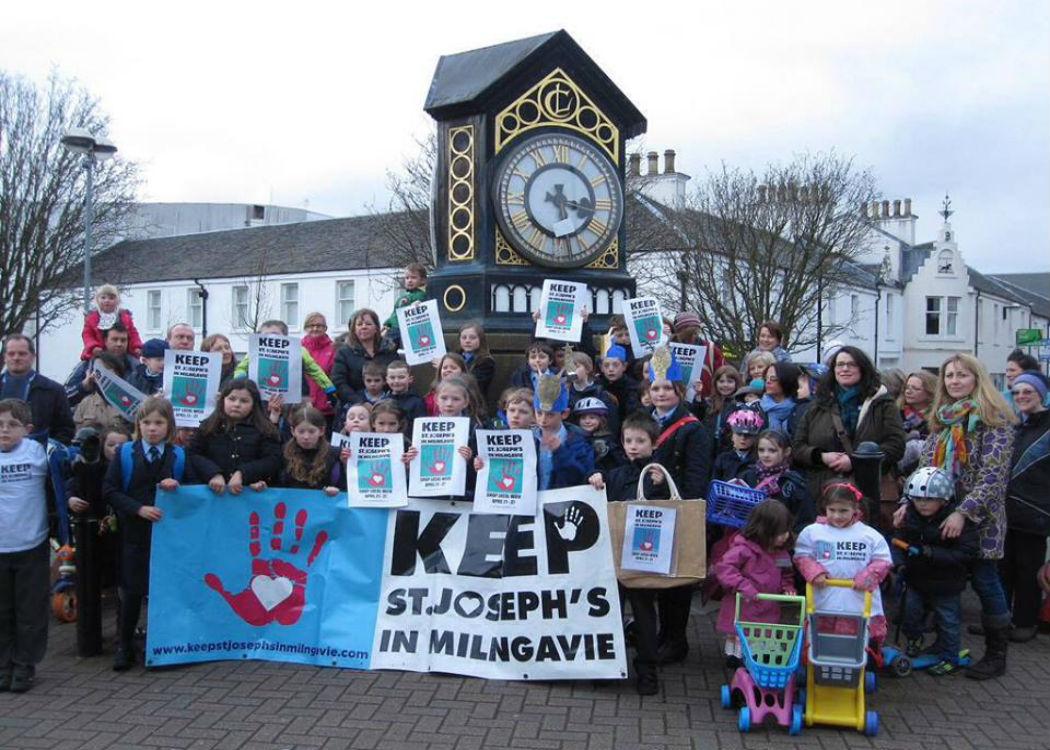 “FORGET free schools and all the associated baggage,” says Bill Nicol, trustee of the Hometown Foundation.

Nicol is the man behind what he claims are several bids to create a revolution is school education in Scotland.

“What we are looking at is state funded autonomous schools,” he says.

The scheme would see schools, including Saint Joseph’s Catholic school in Milngavie and the Al-Qualam Muslim school in Glasgow, potentially reach a new arrangement whereby the schools secure funding directly from the Scottish Government, but operate entirely outwith the control of local authorities.

Both schools have hit the headlines in recent months with plans to establish the new set up. If their bids are successful, they would fly in the face of the model of comprehensive education currently established in Scotland, with schools currently owned and operated by local authorities within a single national curriculum.

“We are currently working with faith-based schools, and we are working with other schools that are not faith based.” Bill Nicol, Hometown Foundation

The centrally determined, locally administered nature of present day schooling in Scotland confirms it as part of a long tradition of public sector education in the country. A single, co-ordinated national system is a cornerstone of post-war progressive education. Scotland saw the 50 year anniversary of its comprehensive education system on 27 October 2015.

In its essentials, the new funding model echoes so called ‘free schools’ in England, which have been deeply controversial. Free schools in both Durham and Crawley have been closed amid accusations of poor educational attainment. In the case of the Durham school, allegations have surfaced that children at the school had developed prejudiced views from an evangelist curriculum.

It is perhaps understandable then that Nicol does not want to associate what he is doing with free schools.

So why the need for change to Scottish education? Nicol claims that Scottish education is no longer a “world leader” and innovations are required. The current costs of educating children are too high, perhaps three times too high, necessitating a new model, he says.

Nicol claims that there are more schools looking at his proposals than are currently in the public eye: “We are currently working with faith-based schools, and we are working with other schools that are not faith based,” he says.

Durward, a leading figure in the Hometown Foundation, once advocated letting “the army sort out our schools”, a far cry from the decentralised community control he now advocates.

The prospect of multiple schools making a sudden break with tradition has made some jumpy, and Nicol freely admits there is no current dialogue with teachers’ unions.

Nicol is a director of the Hometown Foundation, a think tank initially founded to establish not “state funded autonomous schools” but an entire autonomous town, ‘Owenstown’, named after the great utopian socialist Robert Owen. The failure to secure land for this grander project led Hometown to the plight of St Joseph’s, a Catholic school in Milngavie, struggling to avoid closure by East Dunbartonshire Council for over four years. What parents now want from St Joseph’s, Nicol claims, is what he wanted from Owenstown; independence.

But Hometown brings its own baggage, particularly in the form of Robert Durward, a political activist with a controversial past who is now a leading figure in the foundation.

Durward is a wealthy businessman with a penchant for putting his money to the service of his right wing beliefs. He has patronised initiatives such as The Scientific Alliance, which he co-founded in 2001 to combat the growth of environmentalism in the scientific community. Durward helped found a political party in 2003; the ‘New Party’, described as “fascist and undemocratic” by former Scottish Conservative leader David McLetchie.

Durward once advocated letting “the army sort out our schools”, a far cry from the decentralised community control he now advocates, now that he is one of five trustees on the Hometown Foundation’s board along with Nicol.

Durward has written : “Perhaps it is now time for Tony Blair to try the ‘fourth way’: declare martial law and let the army sort out our schools, hospitals, and roads as well. Who knows, they might even manage to put the ‘great’ back into Britain.”

For his part, Nicol says he was “unaware” of Durward’s erstwhile comments on education.

When the Hometown Foundation initially approached parents at St Joseph’s earlier in 2015, they were cautious.

“We aren’t about politics, we are out to do the right thing by or community and our children.” Paula Spiers, St Joseph’s parent

But Paula Spiers, one of the campaigning Milngavie parents tells CommonSpace they were aware of Durward’s background.

“When the Hometown Foundation approached us we did a bit of due diligence and a bit of digging and said, ‘oh look where the funding [comes from] and who one of their trustees is’. But we decided we have to put that aside,” Spiers explains.

“That was a challenge for us. But we’ve not accepted any funding from the Hometown Foundation.”

The business plan, presented to the Scottish Government and seen by CommonSpace, includes a range of options for the future of the school, including choices that retain the current funding stream through the local authority and also an option for establishing St Joseph’s as a private school. But the clear emphasis and preferred choice of parents is the autonomous state-funded school.

“We aren’t about politics, we are out to do the right thing by or community and our children,” Paula says.

The money would go to the head teacher, who would have greater leeway over the curriculum, employment at the school and other organisational decisions. The head teacher would effectively share sovereignty over the schools with the parents, Nicol explains.

Other plans for the school would include tendering out school services to local businesses, including school meals, sport and arts education.

“Our education system hasn’t changed in 50 years, this is a way of making our education fit for the 21st century.” Paula Spiers, St Joseph’s parent

“We want to retain Catholic education in Milngavie, but at the heart of it is an existing school,” she says.

“Our education system hasn’t changed in 50 years, this is a way of making our education fit for the 21st century.”

Larry Flanagan, EIS teachers’ union general secretary, sees it very differently: “It would be a shame to mark 50 years of comprehensive education by starting to put schools out with local authority control,” he says.

He is suspicious of the difference between the free school model and what is on offer from the foundation.

He says: “If you look at England in terms of academies and free schools, they haven’t added anything educationally to the mix. It’s about a political agenda about taking control away from local authorities,” he says.

And he’s deeply suspicious of the Hometown Foundation: “You’ll find that where private individuals want to get involved in state education it’s to undermine state education and pursue their own political agenda. There’s a general anti-public sector ethos,” he says.

Flanagan is, however, sympathetic to the plight of communities faced with school closure: “The threat to close any school, which is not just an educational establishment but an organising centre of a community, is certainly going to be controversial. Our argument is that closure should not be happening simply to save money,” he says.

“You’ll find that where private individuals want to get involved in state education it’s to undermine state education and pursue their own political agenda.” Larry Flanagan, EIS

“It would be a good thing if local communities were more empowered in decision making. And that’s a bigger issue than just schools as well. Government is remote from the people. Our large local government can be very removed from the public,” he adds.

Asked about their meetings with the Hometown Foundation and bids from schools, the Scottish Government responded: “Local authorities are responsible for the provision of education in their areas. The Scottish Government supports local authorities to provide appropriate schooling to meet the needs of the communities they serve. We have received the submission from the parent group and will respond in due course.

“Scottish ministers meet a range of organisations with an interest in Scottish education on a regular basis and met recently with the Hometown Foundation’s representative, Bill Nicol. He informed ministers of the Foundation’s approach and its interest in a range of school related projects and issues.

“Our approach to raising standards must be based on what works and we are always open to new ideas for improving our education system. Ultimately, any decision on this, or any other, proposal would be based on the needs of Scotland’s education system as a whole.”

With so many actors in play; from a foundation whose goal is substantial social reform, to local authorities holding onto services amid austerity and unions trying to protect their industry, to parents who just want to save their children’s school, it isn’t entirely clear which vision of Scotland’s education system will ultimately be served.

UPDATE 17/2/2016: CommonSpace has since been contacted by legal representatives of Robert Durward who said that his comments regarding the army taking over schools were “tongue in cheek”. Below we have reproduced the full text of the letter, sent by Robert Durward to the Herald newspaper’s letters section in 2001, which contained the comments.

“The only positive aspect of the Foot and Mouth crisis has been the sheer efficiency of our Army in getting to grips, once again, with a truly desperate situation. Although the use of the army can be regarded, quite rightly, as a sign of failure, these failures are normally diplomatic. However this crisis has been a disturbing demonstration of just how hopelessly inadequate our current administration has become. A system which struggles to deal with mundane matters and falls apart at the very outset of a crisis. Inexperienced politicians failing to admit to the scale of the problem or accept that they are out of their depth. Knowledge and competence being swamped by red tape and bureaucracy. Thankfully the army had the ability to cut through this morass, and prioritise action. However the mind numbing bureaucracy, red tape and sheer incompetence continues at full speed astern in all other areas, our country is being strangled. We must ditch this politically correct, self-destructing agenda and get back to the basics of promoting a forward looking, exciting and fun society, in which we may all prosper. Perhaps it is now time for Tony to try the “fourth” way, declare martial law and let the army sort our schools, hospitals and roads as well. Who knows they might even manage put the Great back into Britain.”