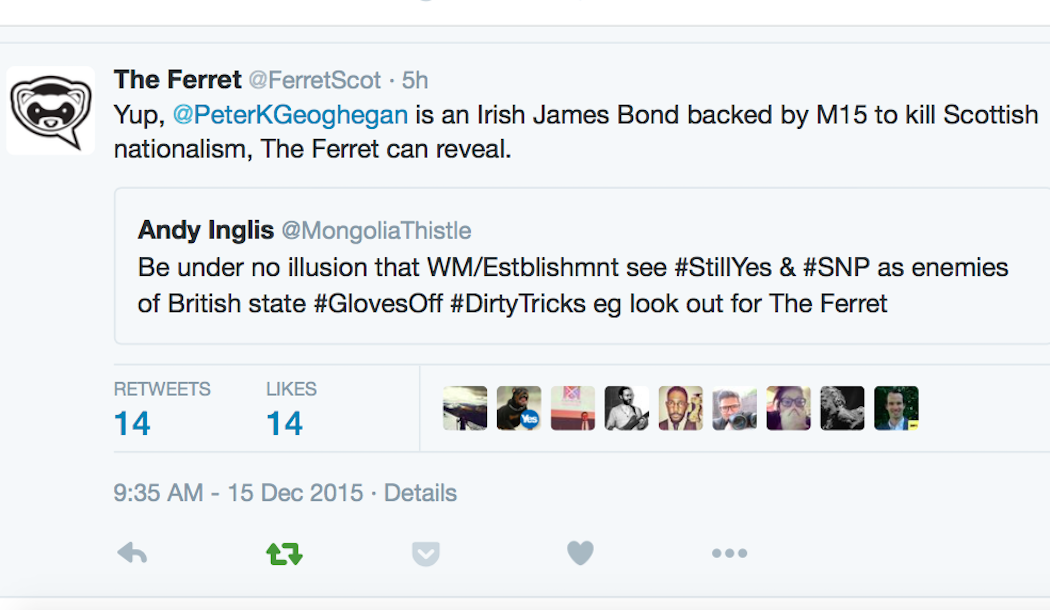 A BRAVE soul has put his head above the parapet to reveal that independent journalism unit The Ferret is in fact part of the Westmonster Establishment.

The news comes as a shock to all those who were quite pleased to see a not-for-profit new media platform take up the mantle of investigative journalism at a time when it’s sorely lacking. It was a shock to discover that The Ferret is basically funded by the Red Tories.

“Perhaps they should investigate themselves,” sneered another tweeter, who also condemned the journalists for “dancing with the devil”, leading to unconfirmed rumours that some Ferret reporters are indeed members of the Church of Satan. Or possbily that Masonic lodge next to Edinburgh Castle. But in any case, definitely MSM shills set on the destruction of the SNP.

Fellow journalist Iain Macwhirter – also under suspicion from the truthspeakers for not hating the Red Tories enough – was clearly shocked. He tweeted: “It’s what many of us suspected all along. The ferret is really a mole.”

The Ferret was established earlier this year with the stated aim of “sniffing up the trouser legs of power”. The collective claims to be independent and funded by member donations, but it seems now that its members may be traitors to the cause of indy, having voted overwhelmingly to fund an in-depth investigation into fracking in Scotland.

It’s just the latest disappointment for people who demanded a new, balanced media during the referendum, and are furious to discover that this involves regular questioning of the ruling party.