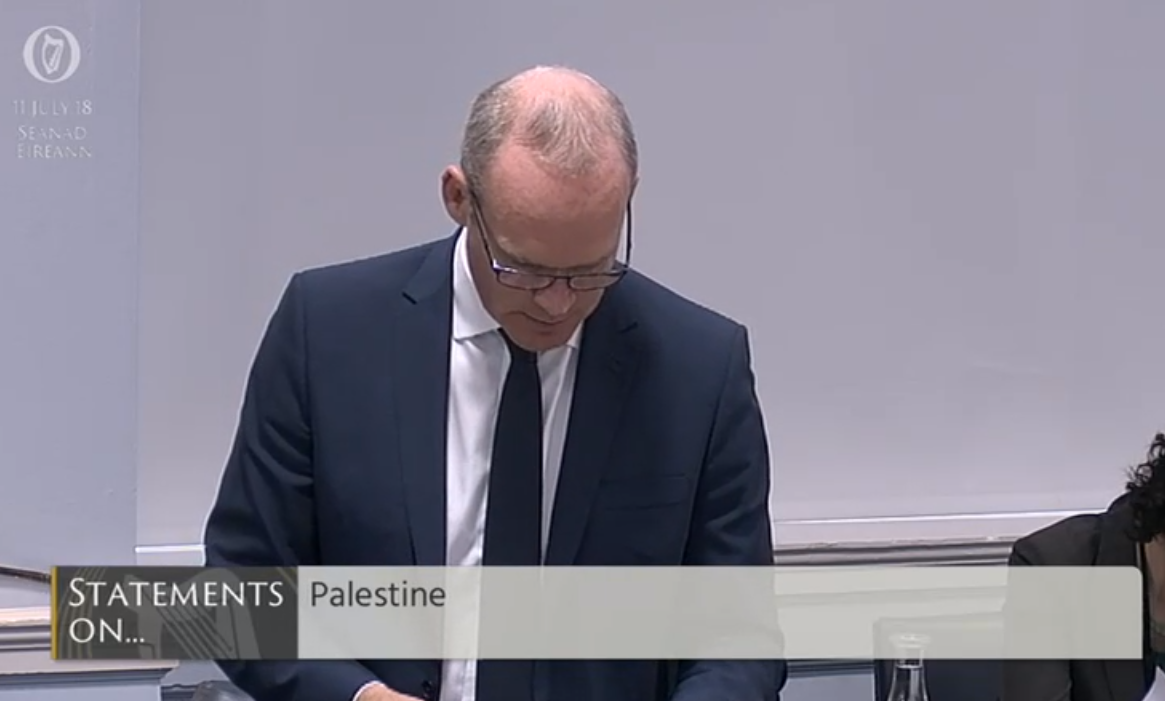 Bill proposes to prohibit “the import and sales of goods, services and natural resources originating in illegal settlements in occupied territories.”

THE Irish Parliament Upper House has passed a bill to ban Israeli settlement goods on Wednesday [11 June], the first parliament chamber in the EU to do so.

The Bill, proposed by independent Senator Francis Black, was put forward in January but was delayed by the Irish parliament indefinitely after Israeli prime minister Benjamin Netanyahu applied pressure on to the Irish Government to stop the Bill

But it was put back on to the agenda of the Upper House in June and backed by the second biggest party in the Irish parliament, Fiana Fail, as well as Sinn Fein and Labour.

The Bill, which was opposed by the Irish Government, will now go to the lower chamber of the Irish Parliament to be debated.

The ‘Control of Economic Activity (Occupied Territories) Bill 2018’ prohibits “the import and sales of goods, services and natural resources originating in illegal settlements in occupied territories.”

Israeli settlement goods are already demarcated separately from other goods from Israel under new EU regulations introduced in 2015. The Bill would seek to make these goods illegal and therefore, the Bill argues, in compliance with Ireland’s own laws and international laws with respect to international trade and human rights.

Israeli settlements are illegal under international law, constituting a war crime according to the International Criminal Court.

The Irish Government has said the motion is not in support of the boycott, divestment and sanctions (BDS) movement, but Netanyahu stated the Bill would “support the BDS movement and harm Israel.”

He added, prior to the passing of the Bill, that it “gives a tailwind to those who seek to boycott Israel and is utterly contrary to the principles of free trade and justice.”

The Irish Government previously said they didn’t think the vote would pass.

Irish foreign minister Simon Coveney TD opposed the Bill. He said he accepted that Israeli settlements were “now at the heart of the conflict” and a “particular focus for action”, but said he opposed the Bill on the basis of legal, political and practical problems with it.

Legally, he said the Bill was in contravention of EU law which did not permit a nation-state to take action on international trade which was out with EU policy, which sets trade policies between all EU states and the rest of the world.

Coveney said he accepted those proposing the Bill had legal advice which said it could be legal under EU law due to exceptions which can made on issues of public policy which have been used by other EU states such as Germany, but said he had written evidence from EU officials confirming that it would be illegal, and therefore that advice “could not be relied upon”.

The Minister went on to say he was opposed to the Bill politically because it would leave Ireland out on its own internationally, saying if “we go too far in front of the consensus perhapse we cease to shape it”.

“This unilateral move would weaken our ability to influence EU policy not strengthen it,” he added.

Coveney said it would undermine the efforts Ireland were making in introducing new solar plants to Gaza and scrapping the blockade by sea, but he was shouted down by opponents who said Israeli forces “would just blow it up”, in reference to previous Israeli attacks on Gaza that have targeted key infrastructure.

Responding, Senator Mark Daly from Fianna Fail said Ireland was out on its own when supporting a Palestinian state in 1980, when there was just 30,000 settlers in Palestinian territory – now there was nearly 500,000, he said.

Daly challenged the EU to “invoke its own laws in relation to human rights in its agreement between EU and Israel”, and said he had received letters from Arab members of the Israeli parliament urging them to pass the Bill, adding that the Minister was wrong to speak of a peace process when there was no conditions for a peace process due to the Israeli government’s actions.

Senator Black who moved the motion said “I’m pursuing this issue because I want to see Ireland take a stronger line on human rights.”

She said she visited Palestine earlier this year and, highlighting an Israel settlement which led to a Palestinian village losing its water supply to provide water for a chicken farm. “The injustice of it will stay with me forever..”

Black added that a similar stance to what the Irish Government made during the debate was made when a motion came forward to the Irish Parliament to ban goods from apartheid South Africa. She said ththe government then was “in fear of taking the first step”, but ultimately did.

“History shows this ultimately enhanced Ireland’s standing in the world,” she said.

Yara Hawari, Policy Fellow of Al-Shabaka, the Palestinian Policy Network, wrote in Al Jazeera last Saturday [7 July] that “this is not an ‘extreme’ or ‘radical’ measure, as some have claimed. It simply identifies settler-made products for what they are: illegal.”

She added: “These products are made on stolen land with stolen resources, under the protection of a criminal regime. Their presentation and sale as legal products helps to normalise Israel’s crimes – the continuous annexation and colonisation of Palestinian land.”

The Bill comes at a critical time in the development of Israeli settlements, with the spotlight on the Palestinian village of Khan Al-Ahmar in the West Bank. Israeli bulldozers are seeking to clear residents from the village and destroy the properties which remain to make way for the extension of a settlement, and on Wednesday [11 June] set up concrete barriers to prevent Palestinians from entering the village to support villagers resisting the clearing.

Many Palestinians and international observers see the destruction of Khan Al-Ahmar as the final death nail for the two-state solution and the full annexation of the West Bank, as it remains one of the last remaining strips of land connecting the West Bank directly to East Jerusalem, widely considered to be the future capital of a Palestinian state.

The UK Government has formally objected to the erasure of Khan Al-Ahmar, supporting the position of the UN that settlements are illegal under international law, but has been criticised by Labour for offering nothing in the way of concrete actions to back up this objection.

Shadow foreign secretary Emily Thornberry stated: “Before the actions of the Netanyahu government render a two-state solution a geographical impossibility … this is the time for the United Kingdom to lead the major nations of the world in recognising the Palestinian state, and to do so immediately while there is still a state left to recognise.”