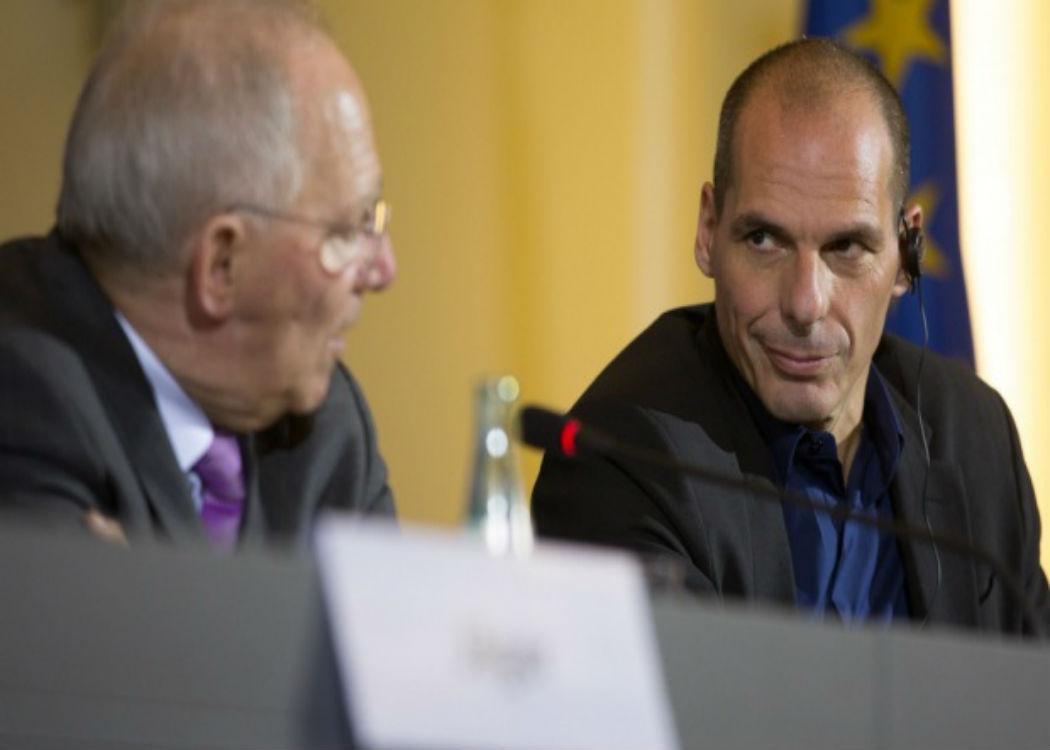 Four pro-independence writers and activists look at the view of Yanis Varoufakis, the new Greek Finance Minister, on Scotland and currency

A REPORT last week by economists at the University of Glasgow argued that it was currency, not ‘the vow’, which swayed undecided voters towards a no vote in September’s independence referendum. The evidence for this is contested, but what no one contests is that the question of currency was an important, and much talked about, part of the independence debate.

The SNP’s support for a ‘currency union’ – shared sovereignty over monetary policy with the Bank of England – was a point Better Together sought to expose: what if the rest of UK said ‘no’ to Salmond’s deal?

Salmond refused to outline a plan B even after all of the UK establishment parties ruled out a currency union, but after severe pressure from the audience in his first TV debate with Alistair Darling, in the second debate he fired back with “three for the price of one”, outlining how the pound sterling could be used without the UK state’s permission and also saying a Scottish currency was an option.

Salmond was widely considered to have won that debate, and with that the currency union faded from the media’s focus in the final two weeks as polls tightened and attention instead turned to which powers Gordon Brown had begun promising.

Now, six months on, the surging popularity of Greek anti-austerity party Syriza and its election as government has prompted fresh debate in Scotland about the future.

Yanis Varoufakis, the new Greek finance minister, offers much to talk about. Varoufakis has risen to global stardom in the space of a few weeks in his transformation from obscure, left-field economist to finance minister, playing a high stakes game which could be pivotal in determining the future of the European Union.

Aside from his media-friendly good looks and sharp dress sense, he’s a character who has managed to capture the attention of commentators the world over. US magazine The Week ran a column simply titled: “Greek finance minister Yanis Varoufakis is the most interesting man in the world.”

And the most interesting man in the world has a connection to Scotland. Varoufakis spent time lecturing at Glasgow University in the late 1990s, and was singled out for thanks by the university’s current principal, Anton Muscatelli, in a paper on interest rates.

During the referendum on Scottish independence, Varoufakis had interesting things to say on the currency question.

In a blog in March 2014, Varoufakis wrote: “Scotland should state its intention to decouple from sterling, once independent, rather than petitioning for a continuation of its subservient role in an asymmetrical sterling union.”

Varoufakis argues that a shared currency with the Bank of England would tie the Scottish economy to a system built to work to the advantage of the City of London, hinder Scottish growth and risk insolvency.

Further, Varoufakis says Scotland has several advantages in pursuing its own currency: already existing Scottish banknotes, meaning the transition to the Scottish pound is straightforward and limits the possibility of a run on Scottish banks, and a relatively low public debt, meaning the currency would be underwritten by financial security.

Varoufakis is scathing in his assessment of the political consequences of not supporting an independent Scottish currency: “The SNP has undermined the referendum’s capacity to denounce the denigration of the Scottish nation’s integrity by clinging onto a sterling union that, according to Mrs Thatcher’s logic, surrenders Scottish sovereignty back to London even before it has been won.

“I can think of no better ‘strategy’ than the SNP’s commitment to sterling if its aim is to lose the referendum and to alienate those Scots who want to vote with pride for an independent Scotland that seeks a path radically different to the one England embarked upon in 1979.”

Varoufakis’ case for a Scottish currency is made in a curious context: arguing against the same thing for Greece. He says that the factors which would make an independent currency the right move in Edinburgh do not pertain in Athens: Scotland having its own banknotes and having a relatively stable financial regime would give it the strength to survive and thrive a currency transition, whereas the impact on Greece would be “undeniably, shattering”.

CommonSpace asked four leading pro-independence writers and activists who were sceptical about the SNP’s position on currency and all had something to say about the economics of independence what they thought about Varoufakis’ view. Here’s what they said.

Jim Sillars, Former SNP MP and author of ‘In Place of Fear II’

As Syriza is learning, a common currency has more than one player. In my view the only way out for Greece is default, out of the euro, and back to a single currency. Default is not something new in the world, and I don’t think Greece, on the road back to growth as it would be with its own currency, will find institutions willing to lend.

I suspect that if Greece does break free, China may step in to help as it, and others have stated their unhappiness with western dominated institutions like the IMF and World Bank.

As for Scotland, the problem with a currency union, although with not so many members as the eurozone, is that it takes two to agree. All Osborne needed to do was say No, and we had permanent uncertainty in a vital area of policy. He was given the initiative and the upper hand.

Our Scottish notes are an advantage. I put it to the Standard Life CEO that if we had our own separate currency, pegged one-to-one to sterling, given that his company must already use our notes for various purposes, that such a currency would pose no problems for him. He replied that he did not go into hypothetical matters, although he was quite happy to do so on the hypothetical common currency.

James Foley, co-author of ‘Yes: the Radical Case for Independence’

According to orthodox economists, currency unions should stabilise our economies and reduce international inequalities. But in reality, they heighten instability and uneven development, and may even lead to the suspension of parliamentary democracy, as we have seen in Italy, Spain, and Greece.

Currency unions allow powerful nations or regions to impose their terms on weaker, often defenceless, economies and social groups. German big business has literally no concern for the democracies of Southern Europe, just as the UK Treasury and the Bank of England have been blissfully unaware of Scotland’s economic problems.

The SNP knows this. Mike Russell said, as late as 2006: “A country without its own currency is a country not only without a steering wheel, but also without brakes and an accelerator.”

Russell even said that Scotland should try to get its own currency before full-blown independence, and that independence would mean very little without an autonomous currency. This is an exaggeration of course, but with a grain of truth.

The SNP decided to back a currency union for political and ideological reasons, believing that many Scots had unconditional faith in certain British institutions. In other words, they backed the pound for the same reason they backed the monarchy: because they were unwilling to face down sentimentalism with a rational argument.

Syriza is rightly conscious of the risks of a drastic Euro exit. It would be irresponsible to dismiss these problems. But Greece’s democratic will might not be enough alone to face down Germany, which is essentially an occupying power.

Syriza’s hopes will then rest on a broader European alliance, as Varoufakis admits. The question is, do the forces exist for this alliance? The problem is that Greece stands as the only country with a viable anti-austerity government. It would need a very dramatic leftward shift in European parliaments, coupled with resistance on the streets, to make this possible. If not, Greece will face a choice between two options: either capitulate to a slightly milder austerity, or break from the Eurozone with all the risks that implies.

That the currency issue was the fatal flaw in the Yes campaign is now almost universally accepted. It failed politically, as Varoukis points out in his article, because Scotland could never achieve sovereignty within the sterling zone when monetary policy was to be decided in London and resultingly, in the interests of the City of London.

It also failed tactically, as it gave the unionists the power of veto causing uncertainty and finally fear amongst sections of the electorate.

An independent Scottish currency was and still is advocated by the radical left and the Greens. There certainly would be the advantages Varoukis mentions in the important transition phase if banknotes were unchanged, but it is not in itself a safeguard against capital flight which is the biggest threat to new or radical states.

Whether we like it or not, a new Scottish currency would need to secure the confidence of the international markets at least in the short term with a clear, credible monetary plan.

However, with at least five years until a second referendum, we have an opportunity not only to discuss a better currency plan but to actually build an alternative Scottish complementary currency now. Is it necessary to choose between single currencies such as Sterling, Scots pounds or euros? A multi-currency eco-system is also possible and the creation of a national currency running parallel to sterling could make a post-indy transition that much easier.

It’s an idea which will be discussed in detail at #RIC2015 with experts from the New Economics Foundation outlining their ideas for a debt-free, permanently circulating, complementary currency which could help refocus our economy pre-independence.

When the independence referendum campaign started, quite a lot of people believed that it was strategically wise to promise a sterling union. While that position was understandable it meant that we never really had a proper discussion of a Scottish currency. From where we stand now I suspect that few people still believe that the approach taken to currency in the referendum helped the case.

There is a period of time now before we face another referendum and this is the time in which we should properly have the debate we didn’t have before. I now firmly believe that any case to be made for an independent Scotland in the future will have to be based on a solid proposal for a properly planned independent Scottish currency.

Do you have a different view to offer on currency and independence? CommonSpace would like to hear it. Get in touch with the editor at angela@common.scot