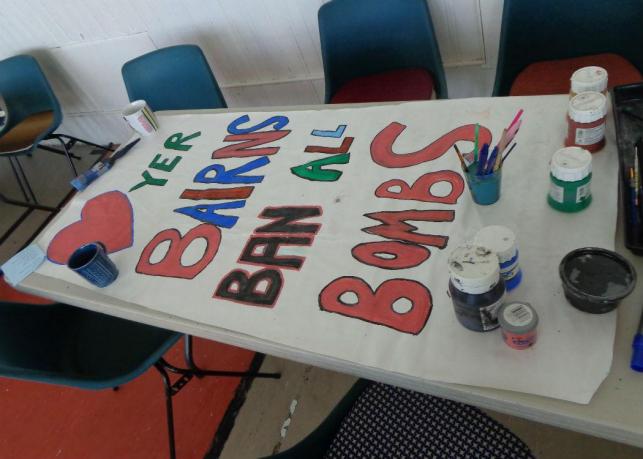 With the historic agreement on a Nuclear Ban Treaty at the United Nations, life long peace activist Isobel Lindsay highlights how the Treaty relates to Scotland.

THE UN CONFERENCE to draft a nuclear-ban treaty has just concluded.  With 130 states participating, it was established to agree a formal treaty banning nuclear weapons to which individual states can sign up. It creates an international framework which presents a political and ethical as well as legal challenge to the concept and practices of nuclear ‘deterrence’.

This means that an independent Scotland can make a firm commitment to sign up to the ban treaty along with the majority of countries in the world.  As a state which would at the point of independence have nuclear weapons on its territory, Scotland would be required within sixty days of applying to join the Treaty to submit a time-bound plan, legally binding to remove nuclear weapons immediately from operational status and then as soon as possible to remove them from its territory. So Scotland now has an international structure – with International Atomic Energy Agency supervision – to proceed to non-nuclear weapons status.

Some of the key points in the treaty are:

State Parties to the Treaty are

– Deeply concerned about the catastrophic humanitarian consequences that would result from any use of nuclear weapons and recognising the consequent need to completely eliminate such weapons which remains the only way to guarantee that nuclear weapons are never used again under any circumstances.

– Mindful of the risks posed by the continued existence of nuclear weapons, including from any nuclear weapons detonation by accident, miscalculation or design and emphasising that these risks concern the security of all humanity, and that all states share the responsibility to prevent any use of nuclear weapons.

– Concerned by the slow pace of nuclear disarmament, the continued reliance on military and security concepts, doctrines and policies, and the waste of economic and human resources on programmes for the production, maintenance and modernisation of nuclear weapons.

c)Each State Party undertakes to prohibit and prevent in its territory or at any place under its jurisdiction or control, any stationing, installation or deployment of any nuclear weapons or other nuclear explosive devices.

g) Each State Party will not allow any stationing, installation or deployment of any nuclear weapons or other nuclear explosive devices in its territory or at any place under its jurisdiction or control.

4)…Each State Party that has any nuclear weapons or other nuclear explosive devices on its territory or in any place under its jurisdiction or control that are owned, possessed or controlled by another State shall ensure the prompt removal of such weapons, as soon as possible but not later than a deadline to be determined by the first Meeting of State Parties. Upon the removal of such weapons or other explosive devices, that State Party shall submit to the Secretary General of the United Nations a declaration that it has fulfilled its obligations under this Article.

This will give Scotland a structure with international backing within which we can develop a security policy which rejects weapons of indiscriminate mass human and environmental destruction.

We must challenge Labour also to give support to implementing this Treaty here.