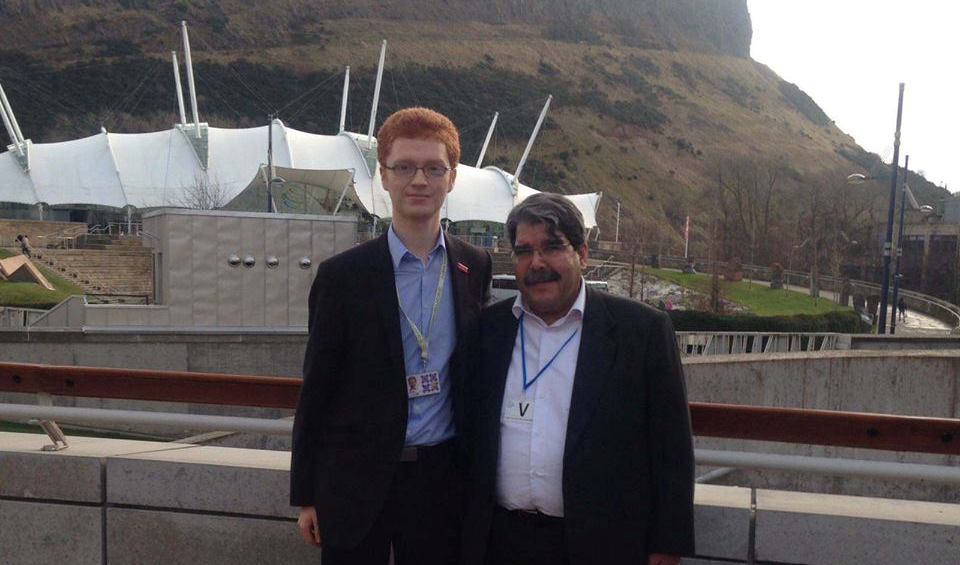 SCOTTISH SOLIDARITY WITH KURDISTAN has welcomed the release of Syrian-Kurdish leader Salih Muslim following his arrest in the Czech Republic on Sunday, but said it could set a dangerous precedent if European countries will act at Turkey’s behest.

The former PYD (Democratic Union Party) leader and prominent advocate of grassroots democracy in Northern Syria was arrested on a warrant issued by the Turkish government, which regards the PYD as a terrorists and had called for his extradition.

Muslim appeared in court in the Czech Republic on Tuesday and has now been released on the condition that he participates in follow-up extradition proceedings, according to comments from his lawyer reported in the Czech press.

Salih Muslim being led into a Czech courtroom handcuffed and escorted by armed guards.

Utterly shameful to see a man of integrity treated this way. Czech Republic should not collude with Turkey’s war on Kurds. #FreeSalihMuslim #TwitterKurds pic.twitter.com/LUOPGkMeM8

Campaign group Scottish Solidarity with Kurdistan (SSK) were among many around Europe to object to the arrest, and member Sarah Glynn told CommonSpace that, while Muslim’s release was welcome news, “it should never have got this far”.

She said: “It’s been encouraging to see the support he’s had across Europe, and the positive could be that it will draw attention to what he is actually saying and doing.

“But if it means politicians like him – people who are calling for peace and democracy – have to be wary of where they can go, that’s frightening.

“Turkey, to me, is becoming an increasingly fascistic state, so a European country acting on their behalf in this way is really worrying. We are worried that Western countries are too ready to bow down in front of Turkey.”

Muslim had been in Prague for a conference on Peacebuilding in the Middle East at the time of his arrest. In 2016, while still acting as co-chair of the main political party in the Democratic Federation of Northern Syria (DFNS), Muslim visited Scotland where he met with MSPs, activists and members of the Kurdish community.

Working with @SalihMaslem in Brussels 2016 and Glasgow 2017. Neither Belgium nor the UK took Turkey’s nonsense demands to arrest him seriously. Disgraceful Czech government have caved to Erdogan. #FreeSalihMuslim pic.twitter.com/tkQcs6fmy2

Glynn met with Muslim at the time, and said that he represented an ideology of hope, of cooperative democracy, and of an emphasis on equality in the region. This, she said, is why Turkey’s actions – and the Czech Republic’s cooperation in this case – should be of such grave concern.

“This is an area of Syria which is a source of hope – it’s surrounded by barbarism and destruction – and it’s inspirational what they’re doing,” she said. “Salih Muslim has been an ambassador for this movement in Europe, for why they see this form of grassroots democracy as the future for the whole of Syria.”

With this in mind, she said: “An attack on them is an attack on democracy, secularism and hope for the future of Syria.”

Muslim’s arrest comes amidst continuing Turkish aggression against Afrin in Northern Syria, where Turkey launched air strikes and ground attacks a little over a month ago in a bid to remove the Kurdish YPG (People’s Defence Units), which it also classes as terrorists.

Glynn said that Turkey’s characterisation of Muslim and of the Kurds in Northern Syria as linked to terrorist was absolutely unfounded. “Everyone they don’t like, they claim are terrorists,” she said.

Salih Muslim is FREE! Well done to everyone pressuring the Czech authorities. They should be ashamed for detaining him in the first place. Why are EU states so willing to abide by the demands of a country which has failed on every level to respect human rights? #FreeSalihMuslim pic.twitter.com/hgs0vw4pzo

Glynn suggested that Turkey’s status as a NATO country and as the guard of the “frontiers of fortress Europe” against the entry of more refugees from Syria meant that European states were “careful not to annoy them”.

However, she said: “The best thing for the refugees and for everyone is to make Syria a safe country, and Salih Muslim and the PYD are the people who are trying to do that.”

Muslim’s arrest, she said, raises the questions: “Is it safe for Kurdish people to talk about what they’re doing in Europe? Or are European countries going to do Turkey’s bidding?”

There is a daily stall of members from the Kurdish community in Edinburgh at the Scottish Parliament to draw attention to the situation in Afrin, as Scottish Solidarity with Kurdistan continues to urge Scotland’s parliamentarians to put pressure on Turkey to cease its aggression in the region.