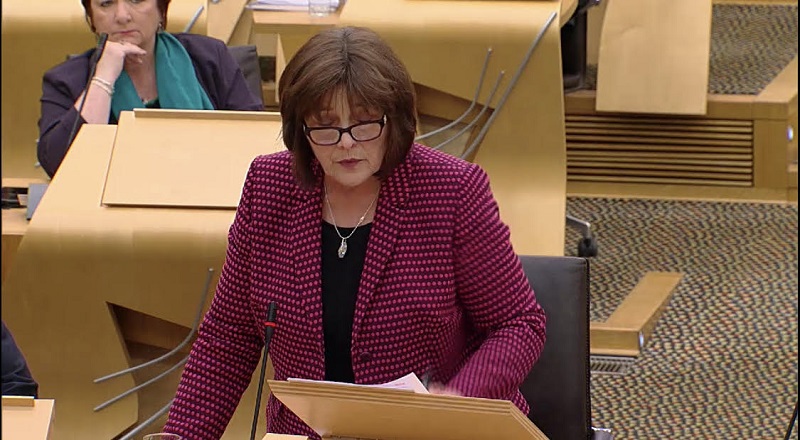 HEALTH SECRETARY Jeane Freeman has defended the rights of whistleblowers and apologised to the parents of two children who died at a hospital in Glasgow.

Freeman today [20 November] apologised to the families of two children who were patients on the children’s wards of Queen Elizabeth University Hospital which were affected by water contamination, both of whom died in 2017.

The Crown Office is currently investigating the 2017 death of a three-year-old boy who died before the ward he was treated in was closed due to the discovery of bacteria in the water supply. Three weeks following this, 10-year-old cancer patient Milly Main also died.

Although the water was untested at the time the two children’s deaths, Main’s mother Kimberly Darroch has said she was “100 per cent sure” her child’s death was linked to an infection caused by contaminated water.

In a statement to MSPs following her appearance before Holyrood’s health committee yesterday, Freeman said: “To lose a loved one in any circumstances is hard, but I cannot begin to imagine the pain of losing a child in these circumstances; or the suffering and grief that will stay with them for the rest of their lives.

“I also want to apologise to them that they feel they have not had their questions answered.

“They are absolutely right to ask and pursue their questions, and they are entitled to have them answered and to receive the support they need.”

Freeman also addressed the rights of whistleblowers in her statement, following Darroch’s accusation that NHS Greater Glasgow and Clyde had engaged in “bullying” the whistleblower who brought concerns about water contamination forward.

“I also want to apologise to them that they feel they have not had their questions answered.” – Jeane Freeman

“The bullying and intimidation from the health board has to stop and they need to show genuine remorse rather than the insulting statements they have been putting out,” Darroch told the Sunday Mail.

The health board appeared to criticise the whistleblower who spoke out, saying their actions were “extremely disappointing” in statements to the Daily Record.

Addressing parliament, Freeman responded to repeated calls for a commitment on the protection of whistblowers, saying: “I take very seriously the concerns highlighted to me about the deeply concerning issues which have been raised by a whistleblower.

“Our NHS, indeed all our public services, can only flourish and improve when everyone working in there feels they can confidently speak up. There is no room in our health service for anyone to be criticise whistleblowers – publicly or otherwise – or to put them in fear for the safety of their jobs.

“Whistleblowing is not something people who have dedicated their lives to healthcare do lightly. It takes courage and they should be thanked.

“Thing can go wrong and when they do I expect board to respond professionally, transparently and speedily.”

Scottish Labour MSP Anas Sarwar, who raised the concerns after he was contacted by the whistleblower, welcomed the health secretary’s commitment that “brave NHS whistleblowers will be safe and not be victimised”.

“Thing can go wrong and when they do I expect board to respond professionally, transparently and speedily.” – Jeane Freeman

“I hope that encourages more staff to come forward so that parents, patients and the public can find out the truth of what happened.”

However, Sarwar did criticise the statement for not going further and placing the health board into so-called “special measures”.

Freeman was also asked in parliament why the health board had not notified the Scottish Government of the contamination in 2017, the reasons for which Freeman said she was still trying to understand.

Responding to questions from CommonSpace, a spokesperson for NHS Greater Glasgow and Clyde said: “We completely understand that this has been a distressing time for families and our staff and we apologise for the anxiety caused.

“Our communication with families and parents has not been good enough and we deeply regret this.

“We continue to take steps to improve communications and to answer questions openly and truthfully. We are also working with Professor Craig White to develop better ways of engaging with families.

“Within NHS Greater Glasgow and Clyde, we encourage staff to raise problems with their managers or with their trade union. We have a robust whistleblowing policy which enables staff to raise concerns and have them dealt with in full confidence. We will continue to support staff in this process.

“There are clearly lessons for this Board to learn and we are committed to making the necessary improvements.”

“There are clearly lessons for this Board to learn and we are committed to making the necessary improvements.” – NHS Greater Glasgow and Clyde

Other MSPs, including Scottish Green health spokesperson Alison Johnstone, questioned Freeman about the need for a change of culture in the NHS.

“Our NHS is its staff, and each and everyone of those working in our Health Service must feel able to raise concerns confidently and in confidence. It’s clear that there is much work required to institute a culture of openness and compassion.

“The Health Secretary must take urgent steps to address this concerning situation and restore confidence among patients and staff.”