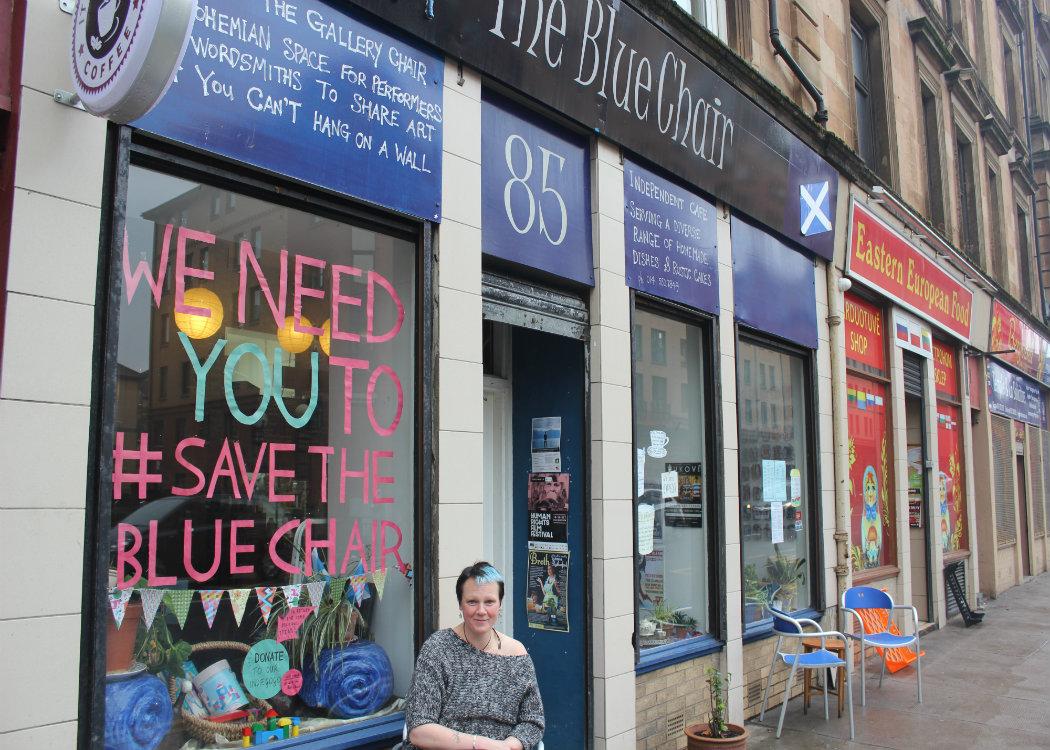 “MOST SMALL BUSINESSES take on debt in their early days. We’re just starting to turn a profit and it’s a chance to succeed that I’m looking for,” Lorelle McGurran explains in the colourful surroundings of her High Street cafe in Glasgow.

The Blue Chair Cafe, in the middle of Glasgow’s Merchant City and East-end districts, could now be just days from closure – signalling an end to a community business that McGurran has dedicated her life to for the past two years.

In the first year, while building up the cafe from scratch, McGurran took on debt – which now runs up to PS10,000 to her council landlord, City Properties. Now her business accounts, which she spreads across the table, show a sharp increase in turnover since those early days – and a crucial transition from the red to the black.

But that progress, and the jobs and tax base her business supports, in now under threat.

City Properties, the council-owned retail arm which took on a mammoth sum of debt (PS120m) when it was set up, says the debt issue must be resolved or Lorelle’s business will be evicted.

“As soon as I told my customers that I was going to be leaving not one of them just said ‘I’m sorry to hear that.’ They all said ‘No. Don’t let that happen. Something must be done’.

“I think that says that I’ve succeeded in having my customers as a part of this business because they all do feel a sense of ownership here. I think it would be unjust on the local community rather than myself as a business person,” she tells me.

“I wouldn’t have been able to dedicate myself to a business if profit was the only aim. There has to be a creative and community aspect.” Lorelle McGurran

The cafe – in its short two year existence – has become a meeting hub for politics, performance groups and a community group for people recovering from addiction.

In all these cases Lorelle has provided free bookings for campaign groups during the independence referendum, to musicians wanting to host an open mic night and a ‘Serenity Saturday’ to provide a safe space for recovering addicts.

It’s an approach to business she says has allowed her to enjoy the work in the cafe, and provide a wider service for the community.

“I wouldn’t have been able to dedicate myself to a business if profit was the only aim. There has to be a creative and community aspect,” she says.

“It’s not a normal business model. I’m not a rampant capitalist. A business isn’t about the product and services – it’s about the people who use it. So everyone who comes in here adds to what the business is.”

In 2013 conflict between local tenants and City Properties came to a head as several owners spoke out against a retail policy that was creating a “graveyard of small businesses”.

Lorelle is the stereotypical image of a small business owner. In two years she has taken three days off, and has invested over PS15,000 into the business since it began. She tells me that her family has suffered during her gruelling 80-hour working weeks, but they have also benefited through the communities that they have around them in the cafe.

But those sentiments are unlikely to satisfy landlord City Properties, which already has a reputation on High Street for taking an uncompromising position to its treatment of tenants.

In 2013, conflict between local tenants and City Properties came to a head as several owners spoke out against a retail policy that was creating a “graveyard of small businesses”.

Today empty business properties line the street. Several have closed in the past year.

“We’ve rallied around to support the Blue Chair because it’s a truly valuable and unique community cafe in the heart of Glasgow.” Aileen McKay

Lorelle has been buoyed by the support of her customers. They have grouped together into a campaign to ‘Save the Blue Chair’, and have launched a fundraising drive to push donations in return for food deals.

Aileen McKay, a Blue Chair customer who has helped to kick the campaign off, explained why she set up the group: “We’ve rallied around to support the Blue Chair because it’s a truly valuable and unique community cafe in the heart of Glasgow.

“Unlike many of the establishments in the city centre, it’s an independent business that offers its customers a warm, welcoming and safe environment. Our campaign has hit the ground running with a crowdfunder which you can find by searching on the IndieGoGo website for #SaveTheBlueChair.

“Supporters can pledge as much financial support as they feel comfortable with in exchange for delicious treats, both from the cafe’s menu and Lorelle’s catering. It ranges from a cuppa and a cake, to a wedding cake, from a burger and quiz night entry, to a full catering and event hosting package.

“We want this campaign to be an effort by the community and for the community. So to get on board, follow The Blue Chair on Facebook and Twitter, or pop by to 85 High Street to say hello. You’ll be made very welcome.”

The campaign is already approaching PS1,200 in total donations – although they still have a mountain to climb to satisfy the council debt collectors.

McKay and co’s main hopes rest on the cafe constructing a fresh business plan that can present a new debt repayment plan for the remainder of the debt. Lorelle says she is in communication with City Properties and local politicians who support moving forward with a new deal to save the cafe, its staff and the communities it supports.

“If City Properties gave us another year to two years in this place I think they would find the other empty properties – and there are four within two minutes walk from here – would become more sellable,” Lorelle says.

“I’m only in PS10,000 of debt. In the greater scheme of things, that isn’t a lot for a business at my stage. In the end the property is owned by the council, City Properties, these properties are owned by the people of Glasgow. These are social properties. I don’t know why this property has got a full Merchant City rent attached to it while not receiving the same level of support that the rest of the Merchant City gets.

But a broader solution to Glasgow’s approach to retail – such as the focus on big retail developments like Buchanan Galleries – is unlikely to come fast enough for The Blue Chair Cafe.

To keep her business alive, Lorelle McGurran needs the support of the customers and community that she has contributed to since her cafe began. The question is whether that help will come fast enough.

City Properties did not respond to a request for comment.