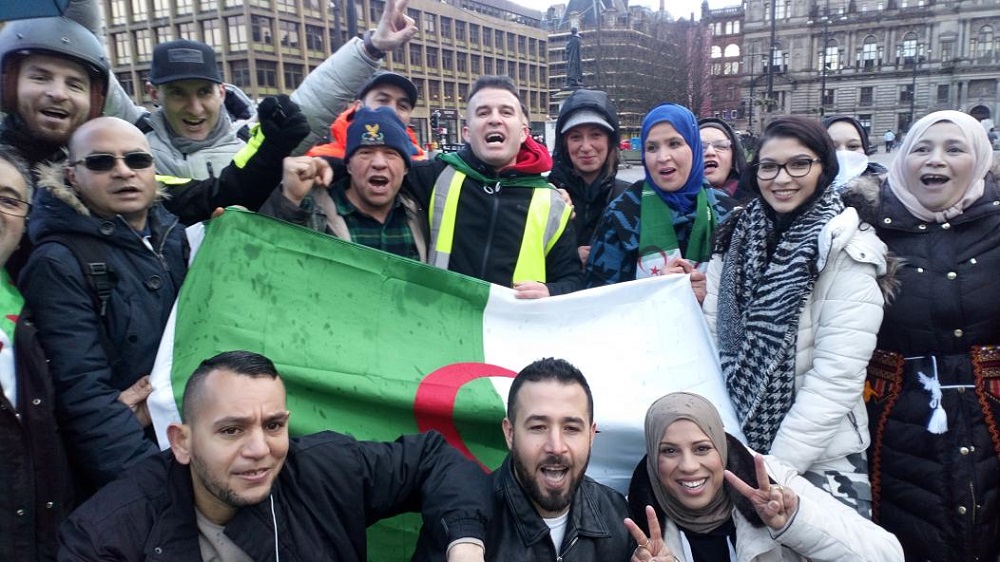 SCOTS Algerians who support a “popular revolution” in North Africa have told CommonSpace they are not satisfied with the removal of President Abdelaziz Bouteflika, but want “the whole system to be removed” to allow for social justice.

Bouteflika announced he would not stand for a contentious fifth term yesterday (11 March), after pressure from mass demonstrations on Algeria’s streets in recent days compelled the judiciary to announce they would not preside over an election with Bouteflika as a candidate. The April election has also been postponed by the sitting president.

The announcement brings to an end the 20 year rule of the reclusive leader, who is in ill-health and is rarely in contact with the people of the country.

Up to a hundred Scots Algerians and their supporters rallied in Glasgow’s George Square on Sunday (10 March), demanding that Bouteflika go.

Read more: Why Britain backs the bombing of Yemen and what it means for Scotland

One of the event organisers, Marzik Hamidouche, told CommonSpace that Bouteflika was just the place man for a wider regime of interests that had to be removed.

He said: “People now are asking for the whole system to be removed. This system has lasted for 57 years, and never changed.

“The last president has ruled us for 20 years, since 1999. And now this president, who is partially dead, he had two strokes since 2012, we haven’t seen him at all for the last year.

“It’s not about him,  it’s just to extend their agenda.

Hamidouche argued that the movement was becoming a “popular revolution” in opposition to a swathe of social and economic problems that afflicted the country.

“The wider problems are every single aspect. There is no social justice. Corruption; there is a terrible problem of corruption in our government. Human rights are completely vanished, no one is protecting the people in terms of human rights, in terms of freedom of speech.”

Watch: Play written and performed by Syrian refugees in Glasgow

Recent weeks have seen strikes by teachers and mass walkouts by students. Mass demonstrations have rocked the country in recent weeks, with claims from the movement that it has reached every part of the country.

Demonstrations have largely remained peaceful, but security forces have responded with teargas in the capital. State media has claimed that around 200 protesters have been detained, but the real figures are not known.

“If you speak out you can end up dead or in prison or forced outside your country,” said Hamidouche.

He said that the ruling elite were holding Algeria back from being a more prosperous  and just country in order to serve their own interests.

Opinion: There’s no place for advocates of Israeli apartheid on anti-racist marches

“They don’t want to let it go. They want to make sure that their legacy stays and their interests are covered.

“What we are doing, is we are making sure that the people of Algeria get back their dignity. We have a talented people, a young people, now their only chance is to leave the country and go and join us here or elsewhere in the world,” Hamidouche added.

A wave of counter-revolutions struck the Arab revolutionary wave from 2011-2013. Nato, including British forces, intervened in Libya to control the overthrow of Colonel Gaddafi from 2011. The UK’s ally Saudi Arabia invaded Bahrain to repress the revolution there in 2011. The Syrian state began a vicious crackdown on protest that launched the country into a civil war that continues to this day. In Egypt the military re-established control with a coup in 2013.

Many believed the hopes of revolution across the region were dashed. But the new movement in Algeria, and continued protests in other countries including neighbouring Morocco, point to the continuation of the social conditions that led to the revolutionary wave.

“The message was social justice, against inflation. But what the powerful did, they reduced inflation, they shut us down, shut the people’s voice down and they carried on with their dictatorship, with their philosophy of rule,” Hamidouche said of the protests in 2011 in Algeria.

He said that though the first wave of the Arab revolutions had been defeated, Algerians had learned hard lessons from the set back and would make a successful second attempt. In 2011 Bouteflika responded to strikes and demonstrations by ending a 19 year state of emergency, expanding press freedom, allowing new political parties and launching a spending programme to tackle unemployment. Protests subsided for a time but now appear to have revived.

“Now we all rise up together. Two days ago in Algeria, all over the country, 48 departments, everyone came out with one demand to get rid of this government and replace it with a proper democracy.

“We’ve come back. We’re back but with a better message. To be fair we have learned from the experiences of the Egyptians and the Libyans. We learned from our fights before and now we are doing it a better way.

“First we go out on the streets, but then civil disobedience and general strikes. It’s not just an uprising now its a revolution and this time we are taking it to the end.”